What is Powdery Mildew?

What is Powdery Mildew?

Powdery mildew is dispersed by airborne spores that originate from infected volunteers and nearby crops.  Warm temperatures and periods of high humidity favour development, dispersal and germination of spores.  It declines during the winter as older, infected leaves are shed.

How to spot Powdery Mildew 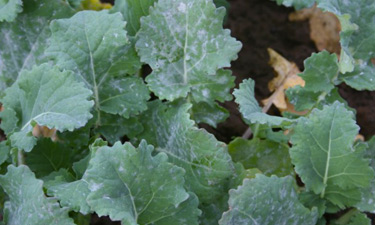 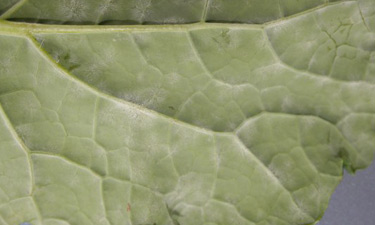 Powdery mildew symptoms on the underside of the leaf

After infection from airborne spores, scattered white colonies develop on the leaves, stems and pods.  It can occur on both sides of the leaves but generally will be more apparent on the underside where it is sheltered from the rain.

When there are numerous colonies. white powdery growth covers large parts of the plant surface including stems, flowers and pods.  Where disease is well established it can cause yellowing of the leaves and, in severe cases, leaves die prematurely.

In some years when the disease is less active, the fungal growth is sparse and symptoms may be restricted to fine black speckling on the foliage and stems.

How to control Powdery Mildew

Sowing from late August onwards can reduce the risks of autumn infection from powdery mildew.  Oilseed rape volunteers in neighbouring fields should be destroyed by cultivation or ploughing prior to the emergence of new crops.

Whilst control of powdery mildew with fungicides has been demonstrated, its impact on yield remains uncertain. Proline275when applied for control of Sclerotinia can have an effect on this disease, but will lack the persistence to fully protect pods. In other crops (brassicas) prothioconazole has a label recommendation for the control of this disease.