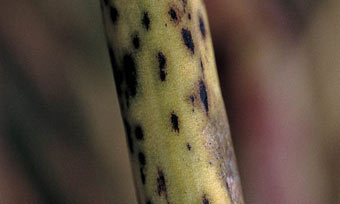 Alternaria is introduced into the crop either by infected seed or spores from previous crop debris in neighbouring fields.  If infected seed is sown, seedings may suffer from damping off or emerge with dieased cotyledons. 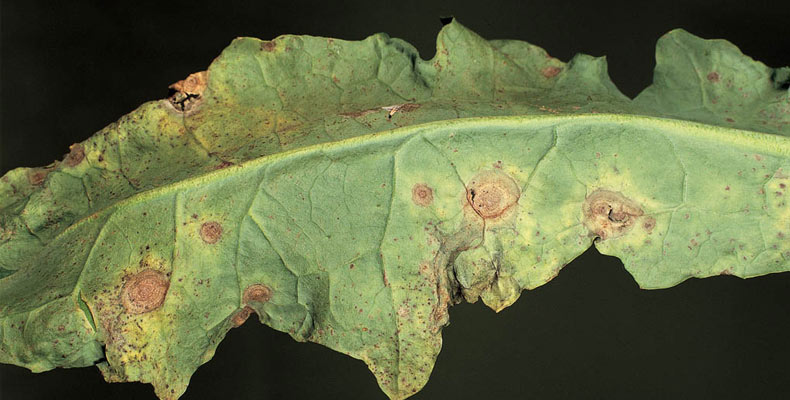 Alternaria lesions on an infected leaf

The greatest impact on yield is caused when Alternaria spreads to pods causing premature ripening, pod splitting and loss of seed.  The pathogen can penetrate the pods and infect the seed within.  Problems are often associated with early lodging.

The incidence of Alternaria pod spot has been variable over the last ten years as it is so weather dependent.  Risks are highest in the south.

How to spot Alternaria 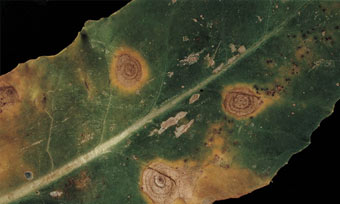 Close up of 'target-spot' lesions

Leaf symptoms of Alternaria can be found from the seedling stage onwards.  Initial symptoms are small black spots about 1mm in diameter.  These lesions develop into characteristic 'target-spots', 5mm to 15mm in diameter, with light and dark concentric rings.  Secondary spotting occurs around the target spots and if left unchecked can cause leaves to turn brown and fall off.

When infection starts from airborne spores initial symptoms may be difficult to find.  The disease usually develops slowly at the rosette stage by splash dispersal of spores within the crop. 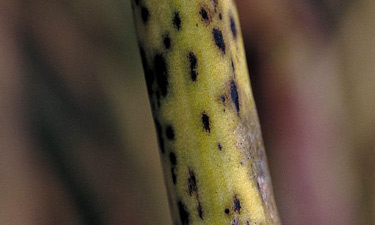 Close-up of an infected pod 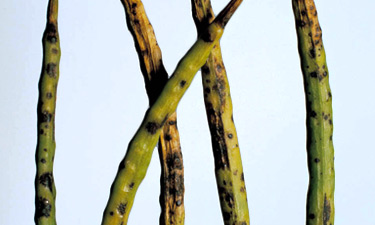 In the spring and summer disease development becomes more active.  There will often be reinfection and transfer to uninfected plants via airborne spores released from 'target-spots'.  Optimum conditions for infection are 17 to 25°C and spores can infect within four hours of landing on a wet leaf at 22°C.

Infected pods may be smaller, ripen earlier and shatter before harvest.  This often occurs in patches scattered throughout the crop.  Very rapid spread can occur during thundery weather.

How to control Alternaria

There are no varieties with resistance to Alternaria, but there are cultural measures that can be taken to limit the effects of the disease.  Crop residues of oilseed rape, or other brassicas in nearby fields, should be buried by ploughing or other cultivations prior to the emergence of new oilseed rape crops.

Crop canopies should be well managed in spring, avoid excessive levels of nitrogen so that the risks of lodging are minimised.

As seed can be a source of infection, it should be tested for Alternaria and treated for the pathogens if found to be infected.  Control of foliar disease is not usually required until the flowering period.  Economic benefits from treatments are most likely to be achieved from sprays applied to protect the crop from mid-flowering up to early pod-fill.  If a specific Alternaria spray cannot be justified a useful reduction in inoculum can be seen from an application of Proline275 (prothioconazole) used forSclerotinia control at mid-flowering.