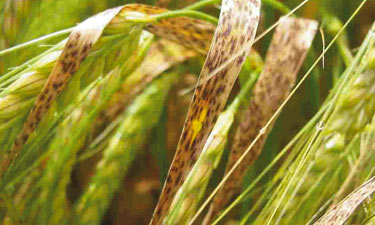 The first symptoms of Ramularia appear as small irregular brown 'pepper-pot' like lesions on the leaf surface, on lower leaves during tillering or on the top leaves at the onset of flowering. These lesions can often be mistaken for physiological spotting but in Ramularia the lesions go through the leaf and are visible on the underside whereas physiological spotting only appears on the upper side of the leaf where it is exposed to sunlight.
These early 'pepper-pot' like lesions quickly develop into more typical Ramularia lesions which appear as rectangular dark brown lesions 2mm x 0.5mm in size, with straight vertical edges in line with leaf ridges and irregular horizontal edges. These lesions are surrounded with yellow chlorotic leaf tissue giving a halo like appearance.
As the disease progresses these lesions remain visible but the surrounding leaf tissue quickly dies back, initially turning yellow.

The main source of Ramularia is seed infection which moves from the seed into developing plant tissue. The infection is deep seated within the seed and can not be identified by visual infection, but it`s presence can be confirmed by molecular diagnostics.
Secondary infections can occur during the season from airborne spores released from infected crops, grasses or volunteers.

This disease was first recorded in 1893 in Italy, but it has only been established as an economically damaging disease in barley crops in Scotland and nothern England since 1998, and given the right weather conditions has the ability to infect crops throughout the rest of England.
Yield losses from Ramularia can be up to 1.0 t/ha in susceptible varieties. Where varietal resistance exists then losses are more typically in the 0.1 - 0.2 t/ha range.

• Clean disease free seed
• Fungicidal seed treatments are not currently considered to be effective in controlling Ramularia present on the seed
• Varietal tolerance as indicated in the recommended list
• Ramularia is of primary concern in spring barley and the main timing for control is at T2.
• Apply effective foliar fungicides at the first signs of the onset of disease. Applications to established lesions are likely to be less effective.
• Disease prediction forecasting systems are being developed