A history of success breeds a future of performance in DEKALB OSR, maize and soon-to-launch hybrid wheat. Strong agronomics, innovative breeding, and robust reliability is creating a legacy fit for the challenges of the future. We’ve invested thousands of hours and millions of pounds into pioneering genetics, which means reliable and resilient varieties for UK growers.

DEKALB’s continual innovation is fuelled by a commitment to supporting growers in overcoming the increasing challenges facing food production. We know DEKALB growers are ready to meet these challenges head-on; so scientists at our state-of-the-art breeding facility in Boissay, France, have relentlessly searched and selected for every positive trait needed to grow high yielding crops. Amongst others, they have pioneered market leading OSR traits like, fast autumn development, pod shatter and double phoma resistance, all with the reassurance of DEKALB reliability.

DEKALB growers have the knowledge and ability to raise high yielding, resilient crops; and to build robust farming businesses, in an environment that is changing rapidly. Our commitment to your success pushes our innovations further. To keep you ahead we’ve invested in testing multiple breeding generations every year and ground-breaking whole genome selection  to keep our seed the best it can be. The long legacy of DEKALB in OSR has grown to success in MAIZE, and a planned pipeline for HYBRID WINTER WHEAT launching for growers in 2027.

Jim’s technical ability to grow OSR is shown in his excellent results. “Last year, our OSR averaged 4.27t/ha with a good oil content. What’s more, coming in at 9% moisture it didn’t touch the drier and went straight onto the boat at Montrose docks.”

Noting DK Exsteel as his best performing variety, Jim’s approach to his crop starts with a late drill date of 11 September into a cultivated seed bed left with sufficient standing stubble to deter the pigeons. Mr Reid prefers to drill rather than broadcast seed, citing correct and even seed depth, as well as rolling, as critical.

“The DK hybrid seems to be perfectly suited to our climate,” Mr Reid says. “It has the good vigour and speed of development we need with late drilling. Its pod-shatter resistance is also really valuable. We get some high winds off the sea, and if one of those comes through just before harvest, it can do a lot of damage. It’s also slightly later to grow away and mature than the other varieties we’re growing, although flowering at around the same time. You don’t want a variety that flowers too early here because you don’t get the pollinators until later into the spring. What is does really well is branch out to fill the space, flowering profusely to give us plenty of pods to soak-up the mid-summer sun.”

The East-Scotland location provides some pest relief. “Slugs aren’t normally much of a problem on these soils, and although we do get flea beetle shot-holing, it’s nothing like growers down south have had to deal with. The larvae don’t seem to get into the stem and the crop powers through.”

Late drilling means plants are still relatively small going into the spring so weed competition can be an issue. To guard against this, the crop gets a pre or early post-emergence mixture of metazachlor with either clomazone or quinmerac. An autumn graminicide is often needed for barley volunteers too.

“Tissue testing has also shown that molybdenum and boron are low, so we apply these at stem extension,” Mr Anderson explains. “And we find extra magnesium at flowering really helps too. Because DK Exsteel has a strong 7 for light leaf spot resistance, an application of Kestrel (prothioconazole + tebuconazole) keeps the disease well in check ahead of flowering.  With the extended flowering period, we’re keen to ensure the crop is kept green, as well as covering the risk of sclerotinia. So, we go back in with a relatively robust mid-flowering application of Kestrel plus azoxystrobin.”

Agrii agronomist, Iain Anderson, sums up saying “DK Exsteel is one of the strongest here and it is doing us a great job.”

Utilising a toolkit approach to combating the increasing challenges of growing OSR, Rob has been finding sheep invaluable in making the most of his early drilled crop.. This season he grazed all 11.4ha of the DK Excited he sowed for a week in mid-November.

“When our five-year rotation puts the OSR on our most fertile ground, we can end up with a worryingly over-thick and over-forward canopy by mid-November depending on the weather. Which is where the sheep have really been useful, removing almost all the foliage and with it, and we hope early disease as well as any CSFB larvae,” points out Mr Atkin. “They have also opened-up the crop nicely and provided extra manure, of course.

“It certainly took courage, and we were very careful to move them on quickly. Immediately after grazing the crop looked pretty bare – particularly one area that was taken down a little too far. Even this recovered well as the crop grew away strongly from winter, however. In fact, it probably had a better structure going into stem extension than the later-sown crops we didn’t graze. Come harvest, our yield maps will make very interesting viewing.”

Although limited by the late frosts and poor summer light levels, Mr Atkin was well-pleased with the 3.9t/ha he brought in from the DK Excited he tried for the first-time last year alongside the 3.8t/ha of his DK Exalte – itself up more than half a tonne on 2020. He sees the new hybrid’s rather less rapid speed of leaf development going into the winter together with strong disease resistance, TuYV resistance and standing power especially well-suited to earlier drilling. Its notably strong and rapid spring development is also proving just what’s needed in the wake of winter grazing.

“Rather than going for the highest yields, we want to get a consistent 4t/ha-plus from our OSR every year with the least possible risk,” he stresses. “Earlier drilling with the most suitable variety is a key part of this. Every bit as important, though, is getting the seed into moisture evenly with good seed-to-soil contact.

The Atkin’s use a Shakaerator at 6-8” and then drill to a consistent 1.5cm following sewage sludge application to ensure moisture, citing even sowing (deliberately kept down to around 40 seeds/m2) at a shallow depth key to consistent establishment. This is followed by rolling.

“The most important thing for us is to get our crops out of the blocks quickly, “insists Mr Atkins. “They also need to have the greatest get-up-and-go in the spring. As well as vigorous establishment and rapid early development, we choose our varieties for the most robust all-round strength. This includes disease resistance, standing power and pod shatter resistance so we can manage the harvest for the least weather and combining losses.

“That way we are firmly on the front foot with our management, and have the greatest flexibility to match our agronomy to whatever the season throws at us. We always like to have well-grown oilseed rape going into the winter. But we are equally conscious that having it too thick and forward coming into the spring can get in the way of developing the most efficient light-intercepting canopies as well as increasing light leaf spot pressure.

Rob finds hybrids like DK Excited are a perfect choice for growers looking to sheep graze, thanks to their superior recovery abilities and fast spring regrowth.


“With sheep in our armoury in addition to the traditional seed, fertilisation and crop protection tools, it looks like we may have a very valuable extra risk management tool.”

Take a look around our state-of-the-art breeding facility in Boissay leading the way in bringing to the market pioneering genetics by combining DNA marker technology, AI and genetic diversity. By breeding multiple generations every year, the team are responsible for creating innovative varieties, painstakingly built on the positive traits of multiple existing varieties. For growers, that means high yields, resilience and reliability in OSR, maize and soon-to-launch hybrid wheat. 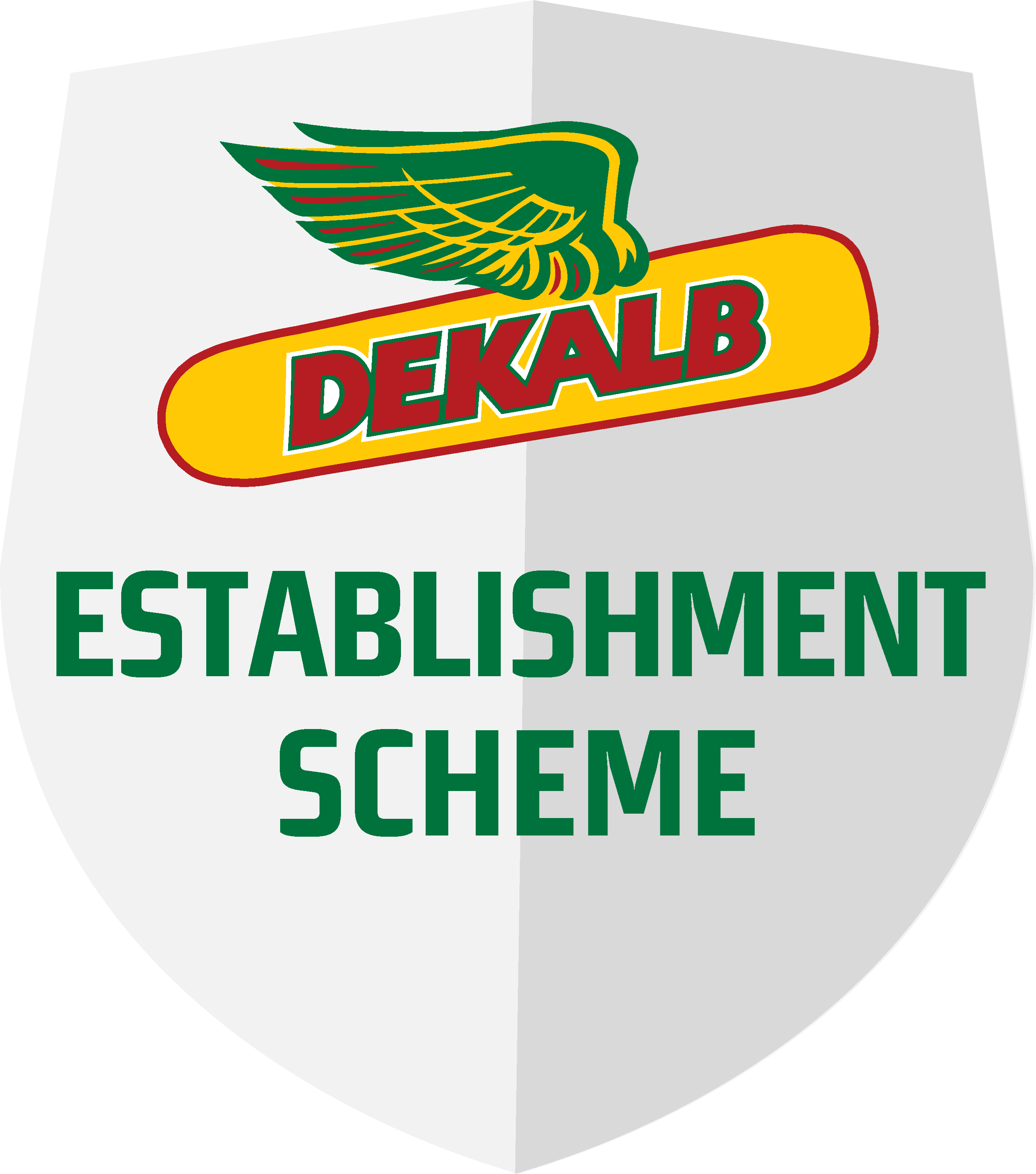 Bayer CTMs are on-hand to work with growers and agronomists to support variety selection, working together to best achieve your goals. In additional support, the DEKALB OSR establishment scheme is here to provide extra reassurance to growers in challenging times. All DEKALB varieties have strong development characteristics, helping them grow away from establishment challenges, however, should your crop fail due to flea beetle or other pressures, you’ll be credited by your seed supplier with £100/bag.

Find our DEKALB Products below

Growing Maize can be a real challenge. To match the skill of growers, DEKALB has developed a unique combination of positive traits to improve yield potential by creating a vigorous, robust and resilient range of Maize varieties to suit any farm.