There is much growers can do to reduce oilseed rape growing risks, from planning and management well before establishment, right through to harvest strategy.

Bayer commercial technical manager, Ben Frost believes that growing oilseed rape more frequently than once every four years has not done the crop any favours as the challenges have built-up.

“As well as taking the pressure off individual fields, wider rotations reduce the amount of crop grown locally which may help reduce pest and disease risks.”

At the same time, ADAS crop physiologist, Dr Sarah Kendall stresses the need to be selective about where the crop is grown, pointing out that the best Oilseed YEN results invariably come from those paying most attention to detail, including field selection.

“With extreme weather events becoming more common, OSR crops are much more likely to have to endure a wet winter, a dry spring/early summer or a combination of both, with serious implications for rooting, crop development, seed set and pod filling,” she says.

“To give the crop the best possible chance, it really shouldn’t be grown on ground that is poorly drained or prone to water-logging. And it’s crucial to remove any compaction ahead of planting.”

Agrii agronomist Todd Jex agrees that ensuring the best place for OSR in the rotation reduces risk, and he has also found early sowing, long stubbles and companion cropping to be good ways of dealing with the cabbage stem flea beetle (CSFB) threat.

“Winter barley provides the best entry for OSR,” he adds. “Early harvesting allows OSR planting from early August. It also gives enough time to drill a good buckwheat-based companion ahead of the crop. And you can leave a decent height of cereal stubble as the most effective CSFB disguise and nursery for the establishing rape.”

Given the crucial importance of having sufficient soil moisture to get the crop through its most vulnerable cotyledon stage and grow away quickly, all three advisers see drilling with the least possible soil movement as another essential de-risking tool.

They agree too that oilseed rape should only be drilled when there is sufficient moisture in the ground, rather than in expectation of it, and at an even depth with good slot closure and effective consolidation for best seed-to-soil contact

While drilling in early August may help OSR establish, Dr Kendall urges everyone to appreciate that crops can become over-developed if conditions are favourable. This makes canopies difficult to manage for the greatest light interception and standing power, restricting yield potential.

“Keeping seed rates down is important in ensuring thick-stemmed crops with good lateral branching for the most efficient and resilient canopies,” she says.

“Autumn plant growth regulation should be considered too; as should alternative cultural measures, such as sheep grazing, which we have found valuable in reducing CSFB larvae.” 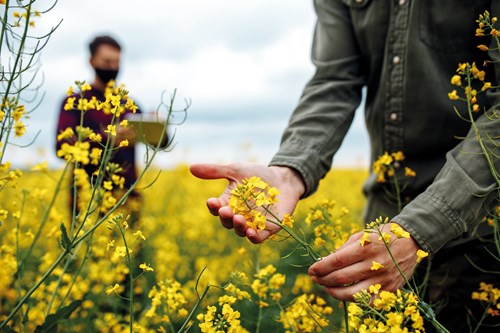 Improving the crop’s genetic tolerance to a range of stresses is equally important in reducing risk, says DEKALB breeder Matthew Clarke. He has been responsible for bringing key genetic traits to the UK market over the past 20 years; most notably, low biomass, vigorous establishment, double Phoma and pod shatter resistance.

“As the drilling window has been extended, matching varieties to sowing slots for their development characteristics has become increasingly crucial,” he says.

“Hybrids like DK Exsteel with the most rapid autumn development are vital when you’re drilling beyond the beginning of September. But, to minimise the risk of excessive development before winter with early sowing, you are better off with varieties likes DK Exstar and DK Excited which marry vigorous establishment with a more restrained rate of autumn development.

“If you want the widest sowing flexibility, RL candidate, DK Expose has a growth habit that suits sowing from early August well into the start of September.”

Mr Clarke also says varieties that are earlier or faster to grow away in spring provide useful extra tolerance to damage from CSFB larvae or pigeons, not to mention recovery from winter sheep grazing used to deal with excessive canopy development.

Furthermore, with the increased pressure that earlier sowing brings from light leaf spot and lodging, strong varietal resistance to these challenges is another key to minimising cropping risk, as can be Turnip Yellows Virus (TuYV) resistance.

“We need to think beyond major traits or physiological characters, though. By employing a whole genome approach, we are increasingly moving from selecting to designing the best

all-round genetic combinations for particular environments. And testing them completely untreated in a range of high stress situations means we can ensure the most important traits come through within a background of the greatest environmental resilience.”

Studies suggest much of the superior environmental stress tolerance the DEKALB programme has built into oilseed rape is linked to a greater branching ability, particularly branching from low down the stem.

This ability can only be fully exploited where plant populations are not too high, underlining the need for careful control over seed rates and subsequent agronomy to make the most of this extra resilience; particularly matching spring fertilisation and plant growth regulation to canopy needs.

Light leaf spot comes a close second to CSFB as an agronomic risk, so as well as selecting varieties with good disease resistance, growers must keep a close eye on infections using the best possible intelligence, Mr Frost says.

“Which is where free services like SpotCheck are invaluable in pin-pointing problems at an early stage for treatment with the most cost-effective Aviator (bixafen+prothioconazole)-based programmes.

“The stay-green value of bixafen is another thing we can take advantage of here to help give the longest period between seed set and desiccation that is associated with higher yields,” he suggests.

“As is pod shatter resistance in allowing us to delay desiccation until optimum whole canopy ripeness without significantly increasing the risk of seed loss.”

Analysis of grower samples from 200 crops of more than 40 varieties sown from late July to early September across the country by Bayer’s free SpotCheck service this season showed higher infection rates in varieties with light leaf spot resistance scores of less than 7.0 and in crops sown before August 21. 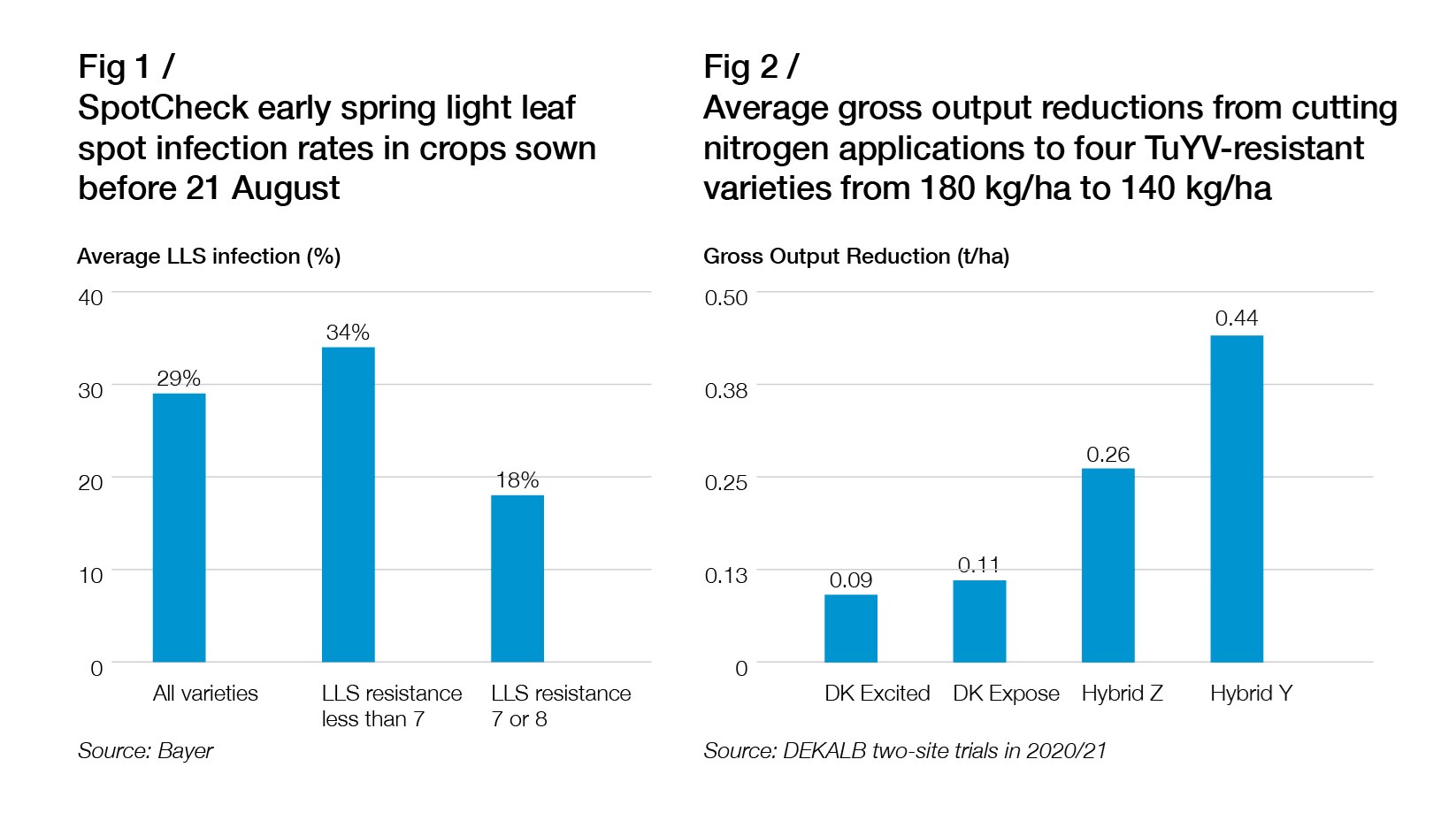 Mean gross outputs across the trials fell from 4.84 t/ha to 4.61 t/ha when nitrogen applications were cut from 180 kg/ha to 140 kg/ha, an average reduction of 0.23 t/ha. However, both DK Excited and DK Exposé lost less than half of this gross output and a quarter that of the variety least tolerant to nitrogen reductions. (Figure 2)

“These varieties follow in the footsteps of a number of hybrids introduced since the first variety to emerge from DEKALB’s restricted nitrogen development pro-gramme in 2016, DK Exception, explains Bayer trials specialist, Richard Williams.

“When our breeders set out almost a decade ago to develop OSR varieties combining the highest possible output under optimal nitrogen levels, with the least output penalties when N supply is constrained, their main aim was to improve the crop’s resilience to seasons in which conditions limited nutrient availability.

“At current fertiliser and rapeseed values, however, this superior nitrogen use efficiency is especially valuable in offering substantial margin gains from input economies.”