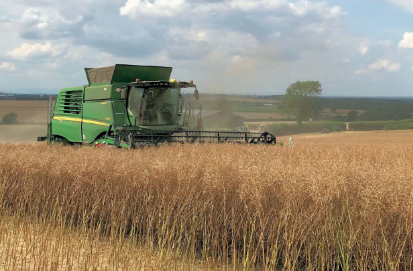 As one of the latest winter OSR harvests in recent years finally gets into full swing, growers are seeing widely varying but generally higher yields than last season, with field trials confirming this as well as substantial performance differences between varieties.

The latest in a series of DEKALB farm trials with 0.25ha strips of current and up-and-coming varieties grown under strictly commercial conditions near Bury St Edmunds, for instance, averaged 4.33t/ha. This was almost two thirds of a tonne (17%) up on the 2020 average of 3.71t/ha.

An exciting new high yielding, TuYV-resistant DEKALB hybrid – currently in NL2 trials stood out here with a seed yield 107% of the current benchmark TuYV-resistant hybrid in the trial.

Interestingly, once again two leading varieties without the trait – DK Exsteel and DK Extremus – both out-performed the TuYV-resistant benchmark by at least 3%.

Meanwhile, yields across the Shropshire farm trials site were, as usual, above average at a mean of 5.14 t/ha and very similar to 2020.

Exactly the same has been evident in results from the first replicated DEKALB small plot trial to be harvest in Lincolnshire, comparing no less than 34 current and emerging varieties with one another and farm saved seed.

DK Exsteel out-yielded the benchmark TuYV-resistant hybrid by more than 9% here, with DK Exstar and DK Extremus doing so by around 5%. What’s more, all three varieties had an advantage of 30% or more over the farm saved seed control.

Committed OSR growers from both sides of the country have seen their yields improve noticeably this season while moving from the same farm favourite to different hybrids with enhanced DEKALB yield-protecting traits.

At Field Hall Farm in Staffordshire, Rob Atkin is well-pleased with the 4.0t/ha he averaged from 21ha of DK Excited tried this season for the first time alongside his main 31ha crop of DK Exalte which averaged 3.8t/ha against a 2020 average of 2.8t/ha.

“Like DK Exalte and the Excalibur we always used to grow, DK Excited suits us well,” he explains. “It has the vigour and fast autumn development needed to get away from the game birds that are our biggest establishment threat. In another catchy harvest, we also much appreciated the DEKALB pod shatter resistance.

“OSR remains a brilliant crop for us as long we sow the right variety early enough into a decent seedbed for the best possible start.”

Across in Suffolk, Dan Kiddy averaged 3.5t/ha from his 13.5ha of DK Exstar at Wm Kerr Farms. A slight improvement on the variety’s 2020 performance, it did noticeably better than both long-time farm favourite, DK Exalte and a field of a Recommended TuYV-resistant hybrid.

“We thought TuYV resistance would be a valuable next step in building our OSR resilience,” he says. “But despite looking great all season, the 5ha we grew came off at a disappointing 3.01t/ha – barely more than our DK Exalte which also had a poor year. So, the trait clearly isn’t everything.

“DK Exstar is our main variety for 2022, with RL candidate, DK Extremus which impressed us in the three variety strip trial we also ran this season alongside it.”