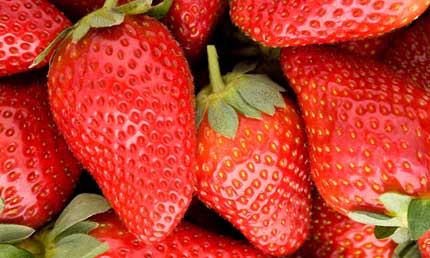 Crown rot (Phytophthora cactorum) could also be a threat. Studies suggest that infection levels in commercial planting material is usually less than 5%, but can be as high as 30%, so the disease should not be dismissed when inspecting crops.

As table 1 shows, the AHDB suggests the optimum conditions for powdery mildew spore reproduction occur when temperatures pass 15.5°C and relative humidity is more than 60%. In practice, once daily average temperatures pass 14°C crops should be considered at risk.

Grey mould favours similar conditions for sporulation with the addition of prolonged surface wetness. It can remain latent until the fruit starts to ripen at which point it becomes active and the rot sets in.

The oospores of strawberry crown rot can sporulate at lower temperatures than either powdery mildew or grey mould, typically below 8°C. Following an over-winter rest period, germination occurs as temperatures rise above 7°C with optimum zoospore release occurring at 8°C.  Like powdery mildew and grey mould, moisture is important with sporangia able to produce airborne inoculum that is dispersed under conditions of high moisture and wind.

Cultural measures can contribute to improved control of powdery mildew and grey mould, especially in limiting the extent of early infections. For powdery mildew this often means practicing good hygiene, but the labour cost of doing so means fulfilling this to the necessary high standard is often unfeasible.

Similarly, most grey mould inoculum arises from within the crop, so good hygiene is essential, but the practicalities of removing debris limit success. Good ventilation to reduce the humidity at times of high risk can contribute to reduced pressure. As conditions come to favour disease sporulation, fungicides remain the most effective form of protection.

The number of fungicides offering good control of both powdery mildew and grey mould has fallen in recent years either as a result of products being withdrawn or the emergence of genotypes with reduced sensitivity. The tightening of Maximum Residue Limits (MRL) and the introduction of the EU Sustainable Use Directive and the Water Framework Directive have further restricted the use and application of synthetic pesticides.

With crown rot, for example, dimethomorph is the only fungicide to offer even moderate control. Given the potential for Phytophthora species to inflict losses – estimated to be in the region of 20-30% – other means of protection have been the subject of long-term trials.

An AHDB-funded study performed by East Malling Research (EMR) assessed the effect of pre-inoculating plants with either arbuscular mycorrhizal fungi (AMF) or plant growth promoting rhizobacteria (PGPR) for the control of a range of diseases, including Phytopthora spp. Neither managed to reduce losses caused by crown rot but may have positive effects against red-core (P. fragariae).

The use of Prestop, a bio-fungicide containing the micro-organism, Gliocladium catenulatum strain J1446, however, showed promising results especially when applied through irrigation lines leading to a reduction of about 45% in plant mortality.

Strawberry powdery mildew is a serious threat to crop production. The disease is more prevalent in protected crops which is especially pertinent to UK systems as most commercial crops are grown in polytunnels or in glasshouses. Fungicides provide the main form of protection and while it is a relatively straightforward threat to manage in late cropping June bearers, powdery mildew control is more difficult to achieve in everbearer crops.

The East Malling Research trial investigated the performance of the bio-fungicides AQ10 (Ampelomyces quisqualis strain AQ10) and Sonata (Bacillus pumilis QST2808) and the bio-stimulant Cultigrow in controlling powdery mildew either alone or in combination with conventional fungicides.
The trial concluded that “bio-fungicides such as Sonata and bio-stimulants were shown to be effective against powdery mildew… and can form the basis of a protectant programme for control, using fungicides only in periods of high risk”.

Having established the performance of Sonata against powdery mildew, the focus of the trial turned to assessing its place in a programme according to the conditions of the season.
The trial concluded that it was possible to base a programme on Sonata when applied in a protective manner with conventional fungicides retained for use in higher risk periods. Such a programme, based on assessed risk, had the potential to reduce fungicide input by at least 40% while reducing residue limits, said EMR.

Fungicides such as Luna Sensation (fluopyram + trifloxystrobin) and Takumi SC (cyflufenamid), both offering curative and anti-sporulant activity, and Talius (proquinazid), curative only, offered good control of powdery mildew and should be reserved for use at times of higher risk.

As recently as 2017, there were 14 fungicide products approved for use against powdery mildew in strawberries, of those only Luna Sensation, Takumi and Talius, and the bio-fungicide AQ10, are considered to still offer effective protection. The introduction of Sonata in 2019 has been understandably welcomed by growers and retailers.

In recent years growers have recognised the potential of silicon-based adjuvants in contributing to control and, in some situations, provide control in their own right. Academic research published in the journal PLOS ONE in December 2020 found that silicon applied via fertigation decreased the severity of both powdery mildew and damage caused by two-spotted spider mites (Tetranychus urticae).

Grey mould (Botrytis cincera) is a potential problem in protected crops but has declined in importance compared with powdery mildew. The use of protected systems and the use of cool chain management coupled with proactive waste handling at harvest for the control of spotted wing drosophila (SWD) has resulted in reduced levels of Botrytis inoculum.

Of the principal diseases that affect strawberry crops discussed here, Botrytis is perhaps the one where the means of control have become highly limited. In 2004, 11 active substances had either on-label or specific off-label approval with those products containing chlorothalonil the most widely available. At the time there were no biological fungicide products for Botrytis. Today, of the nine active substances or combinations of active substances approved for Botrytis, four are biological.

Of the biologicals authorised for use in strawberry crops, only Serenade ASO (Bacillus amyloliquefaciens (formerly, subtilis) strain QST 713) and Prestop can maintain sufficient densities of viable propagules to control Botrytis under protected conditions during the autumn. While Serenade ASO was able to maintain viable densities for up to 10-days post-application, Prestop lasted for just four days.

EMR noted that the continuous flower development of everbearers combined with the limited movement of B. amyloliquefaciens (in Serenade ASO) meant that frequent applications would be necessary to ensure new growth received protection. In a welcome development, however, Serenade ASO showed some promise in reducing inoculum levels of Verticillium dahlia in the soil suggesting it may be a viable alternative to the no-longer-authorised methyl bromide or chloropicrin.

Disease and pest control in all crops is becoming a more considered and complex task, but it is perhaps more difficult to manage in soft fruit. The demanding specifications of the market and tight tolerances for residues combined with limited means of effective protection result in thin margins and high risks. Yet, growers continue to innovate and find solutions to the challenges before them.

The array of products available for the control of crop production threats may not be as extensive as it once was, but where programmes are devised alongside the use of effective cultural measures, we see that effective protection is achievable. As the selection of biological fungicides improves and different preventative measures are explored, there are good reasons for growers to remain confident that the soft fruit sector has a strong future.

5 steps to managing crops under protection

Protected crops present unique challenge to growers, how growers respond can define success. For many growers, the ability to protect crops against pests and diseases has to be balanced with the need to support beneficial insects.

FLiPPER is a new effective biological insecticide with a considerate side for strawberry, tomato and cucumber crops.

As the number of aphids important to horticulture crops rises, the pillars of an IPM programme – continuous monitoring, good hygiene and the timely introduction of predators and biological agents – will be tested fully. If crops are to remain protected it will be vital that all pillars remain supported.