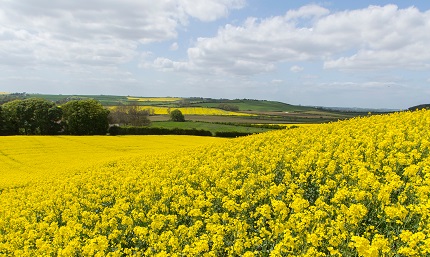 Failure to match variety choice to the particular challenges of early drilling could easily see growers stepping out of the frying pan into the fire, warns leading Oil Seed Rape breeder, Matthew Clarke.

“Some OSR varieties are far better placed than others to take advantage of the opportunities early drilling offers and deal with its particular challenges,” he insists, explaining that the right balance of early plant development is crucial.

“A vigorous establishment ability is particularly important to get the crop through its most vulnerable stage ahead of the peak of flea beetle migration. But the most rapid development so valuable in later sowings should be avoided to reduce the risk of excessively-forward crops going into the winter.

“Having said that, varieties really need to be faster-than-average in their autumn development to give them the best chance of growing away from beetle grazing, especially where establishment conditions are less-than-ideal.

“Hybrids that are earlier or faster to grow in the spring also provide valuable extra tolerance to the higher levels of CSFB larvae that can be expected from earlier drilling,” he adds.

The inevitability of more forward crops makes first class standing power based on the best combination of stem stiffness and lodging resistance vital too, in Mr Clarke’s view.

He also urges growers to prioritise strong light leaf spot resistance to help offset the increased risk from the disease, together with high levels of phoma resistance for the greatest autumn fungicide flexibility.

He sees verticillium and Turnip Yellow Virus (TuYV) resistance as extra safeguards here too, although only in addition to the more important priorities.

“DK Exstar is about the best all-round variety you can get for early drilling,” says Mr Clarke.

“It combines vigorous establishment with rapid – but not too fast – autumn development and is fast to regrow in the spring. It has outstanding 8.0 ratings for both light leaf spot and phoma resistance, an exceptional combination of standing power and stem stiffness, and  shows good resistance to verticillium in ADAS trials.

For extra assurance, all three varieties are part of the Bayer’s market-leading Dekalb Establishment Scheme for 2021, providing growers with a credit of £100/bag for any blocks of 6ha or more sown before September 20th that fail to establish.

“More competitive crops in the early autumn may reduce the need for pre-em herbicides, relieving workload pressures as well as limiting pre-establishment investment, too.

“Early drilling varieties with strong phoma resistance will give more flexibility to delay autumn fungicide treatment, targeting it more effectively against the higher light leaf spot risk. This can, of course, best be planned and targeted using the free SpotCheck service to identify infections before they become visible.

“Remember, though, an early autumn application of metconazole may be needed to regulate the growth of crops that are particularly forward – especially if they are also very thick. Equally, relatively large canopies coming out of the winter put the onus on careful spring N management to Green Area Index (GAI) and effective spring growth regulation.”