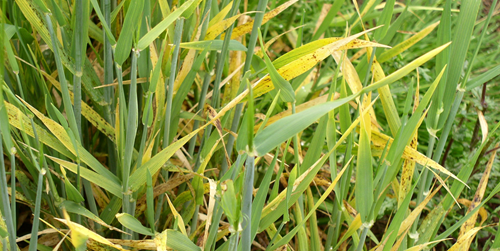 Hosted by Robert Neill of Upper Nisbet Farm. the apprentices were set the task of planning the most profitable disease management programme for a virtual crop of wheat.

Split into two groups, they first had to select one of five varieties with varying degrees of yield potential and disease ratings. They then had to choose a drilling date and plan a fungicide programme using a selection of azoles, SDHIs, strobilurins and a multisite.

Both groups also had an agronomist on hand to offer some guidance, David Cairns of MSP and Stuart Fripp of Crop Services. But final decision making ultimately rested with the apprentices themselves.

The students relished the chance to use the latest disease diagnosis technology, which was employed to help refine T2 decision making. The apprentices selected leaves from their crops, sent them to the ‘virtual’ lab and received results informing them of the quantity of Septoria DNA present within the leaf. The results varied for each team depending on their prior decisions.

Putting a disease control programme together with little, and in some cases no agricultural experience, is a demanding task. But adding to the challenge, the apprentices had to update their plans based on a series of ‘virtual weather events’ and undertake other farm tasks in between to reflect the multitude of decisions farmers constantly have to make throughout the season. “We wanted the day to be as realistic as possible and mirror what farmers often have to deal with – sudden changes in our British weather and the unforeseen. An important part of the workshop was to see how the two groups responded to the unexpected arriving, notes Bayer’s Craig Simpson.

Given that significant weather variation has been experienced in recent seasons Mr Simpson believes both groups performed admirably. “We calculated a range of yield parameters based on variety gross output, disease ratings and drilling date, and the potential impact of seasonal events. It was then up to the teams to decide what was an appropriate fungicide response with the winning team being decided on virtual gross margin achieved.”

Both teams also considered resistance factors – something that they weren’t briefed upon. “It was the apprentices who raised the issue of resistance and mixing or alternating chemistry. That shows the level of debate in both groups,” he adds.

The difference between the group scores was the way they analysed the data, which is where Mr Simpson believes potential lessons lie. “The winning team discussed every data point as a team, in depth. They recognised the potential weather impact and as a result remained in a protective situation. The other team overlooked this and had established disease by GS39, which impaired yield and increased the fungicide bill. However, it was still a good effort.”

But it wasn’t just the apprentices that learnt something at the Bayer sponsored event, course advisors also gleaned something from the day.

What Mr Simpson took from the day was the need to keep an open mind. “For those of us who have spent several years in the industry and ‘seen it all before’ maybe a touch of complacency might set in. Perhaps we need to delve a little deeper at times.”

For agronomist Stuart Fripp an open mind is never a bad thing. He says producing a successful crop is a complex management task with multiple variables. “The weather is one obvious variable but so are the soils crops stand in, the bugs that wade through them and spores that might land in them. Added to that is the differences among farmers themselves and their management strategy – there’s no ‘one size fits all in farming.”

He too was impressed with how both groups worked as a team. “They worked together to evaluate the information to hand and agree disease control strategy. It is a little different to how I work where I can be in a field by myself. it is always good to see a crop first hand but the more information the better. Technology such as Bayer’s Rapid Disease Detection service gives me another layer on information to go with what I’m seeing in a field.”

One thing that delighted both was the enthusiasm of all on the day. “Technical merit scores for both teams would be decent, but for aptitude it is a ten. All took to the task with great zeal. And for some it highlighted how sophisticated agriculture is, and the level of technology employed in modern farming. These apprentices are starting out in what will be an exciting period in agriculture,” says Mr Simpson.

Mr Fripp agrees and points out agriculture offers numerous career paths. “Whether your interest is plants and biology or mechanical engineering there is a role in the industry. What is particularly pleasing is that not all of the apprentices were from rural backgrounds highlighting that it is still an exciting industry to work in,” he concludes.

The latest farm technology and a farmer’s enthusiasm has inspired the latest group of FW apprentices to fulfil a career in agriculture.

Farmers Apprentice is Farmers Weekly’s response to the challenge of recruiting the best business minds into agriculture, by providing a platform from which young people from all walks of life can get a foot on to the farming ladder

Rozzi Martin, Combinable Fungicide Campaign Manager at Bayer, shares a taster of our rapid disease detection technology that we are developing to help you inform and justify your fungicide decisions.