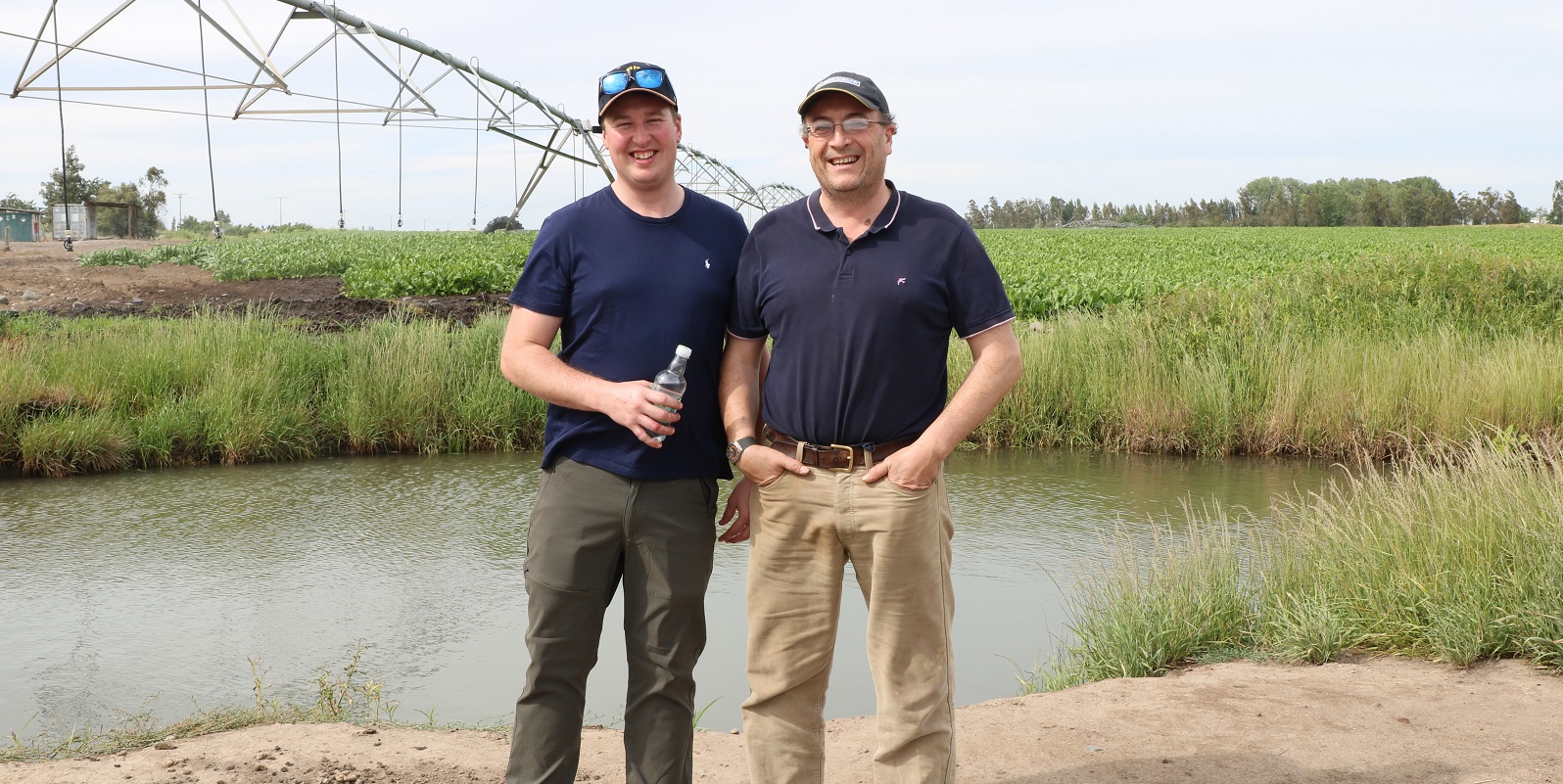 Chile is home to the world record holder for sugar beet yield: Barbara Becker grew a mammoth 196.7 t/ha in the 2016 season.

Not surprisingly, the farms we visited highlighted the yield potential of the crop in Chile, with beautiful-looking crops basking in huge amounts of solar radiation.

“The average yields (110 t/ha) and field yields they can get are mind-blowing,” said James.

“Not only that, but the potential yields they could be getting in 5-10 years’ time, with the right breeding, is staggering. I don’t think they realise the potential they have – they see it as normal.”

One crop we visited, drilled on 20 September, met across the rows in just 50 days, well ahead of the 90-100 days it usually takes a crop in the UK. With around double the solar radiation of the UK, the extra climatic resources give Chilean beet growers an enviable advantage.

One of the keys to the high yield is irrigation. Most growers put on 700-1000 mm of water during the growing season with a lot of the crop grown under central pivot systems.

“Very few growers irrigate in the UK, but in Chile water is cheap, so it is pretty cost-effective to put on that water,” said James.

A quick comparison with the cost of irrigation in the UK on James’ farm, where he irrigates his potato crop, suggests in Chile it is something like 13-14 times cheaper to irrigate a crop for a season than it would be in the UK.

“Of course, with their climate they have to be less reliant on rainfall during the growing season.”

However, while water seemed plentiful and regulation fairly relaxed, both James and Mark wondered about the future. One grower told us this season had been drier than usual, with only 600mm rain rather than the usual 1000mm. Further north, out of the sugar beet growing area, the drought was even more pronounced.

“Will their water use be more controlled in future?” Mark asked. “I suspect at some point it will be. Will that drive greater use of technology to use it more precisely?”

Currently on sugar beet farms the spade is the main tool used for judging when to irrigate, rather than soil moisture probes, and while variable application is possible, it is not widely used, if at all. “The spade is good and you don’t want to rely solely on probes, but at least quantify why you’re irrigating,” Mark suggested.

Chilean sugar beet growers typically seem to use more nitrogen than their counterparts in the UK, and again with less regulation.

“We use less, but our crops have less water as we don’t have the irrigation. Their canopies look fantastic – very green – but do they need to be that lush? In Europe, the lusher it is can sometimes mean lower sugar contents.”

Typically sugar content in Chilean beet is lower than in the UK: “In Chile, it’s usually around 17%, but almost a miracle for it to be over 18%. But if you have all this sunlight, the warmth, the moisture so you’re always photosynthesising and making carbohydrate and then sugar, why can’t it be higher?”

To continue increasing yields, it might be something the Chileans could investigate further, he suggested.

Another surprise was that some Chilean beet growers were growing beet crops in quick succession, sometimes as soon as one crop in two. It highlighted that for some short-term thinking was dominating – the need for immediate commercial success versus the long-term sustainability of the farm and crop’s success.

It certainly wasn’t the same for every farmer we visited. Hernan Martinez, based just outside of Chillan, was growing beet one crop in four, and had a very clear sustainability focus on everything from soil health to future profitability.

But for others, the need to maximise profitability through the crop was driving the tighter rotations, and that in turn was starting to put agronomic pressure on the crop. For example, weed beet, despite a climate that reduced the risk of bolting, was an issue on some farms because of groundkeepers.

The new herbicide-tolerant sugar beet system, Conviso Smart, was being hailed as a potential solution to bring it back under control:

“It’s a tool that will help them, but they will need to be careful they don’t break it,” Mark warned.

Another rotation-driven issue was Rhizoctonia. A disease that’s not much of an issue in the UK, in Chile it was a key requirement for breeders to produce varieties with resistance to the disease.

“They’re paying high rents for land out here,” said James. “And beet is one of their most profitable crops, so they’re almost being forced into a corner to grow it in a tight rotation to remain profitable without any government support.”

Fungicide use in Chile is higher than in the UK. Our two main disease threats, rust and mildew, are more or less non-existent in the South American country, but unfortunately Cercospora is not.

Typically, pressure from the disease starts in January and increases during February and March. Advice up until two seasons ago, was to start applying fungicides from first observation of the disease, which could be as early as November with continual irrigation. That drove six or seven applications in a season, explained Ramiro Paillalef, who manages the research and development programme for Chilean sugar beet processor IANSA:

“We’ve now changed strategy to do our first application in January, and repeat applications every 21 days.”

Together with improved genetic resistance that has helped reduce spray numbers to three or four applications.

Virus Yellows: How scientists hope to solve the breeding challenge