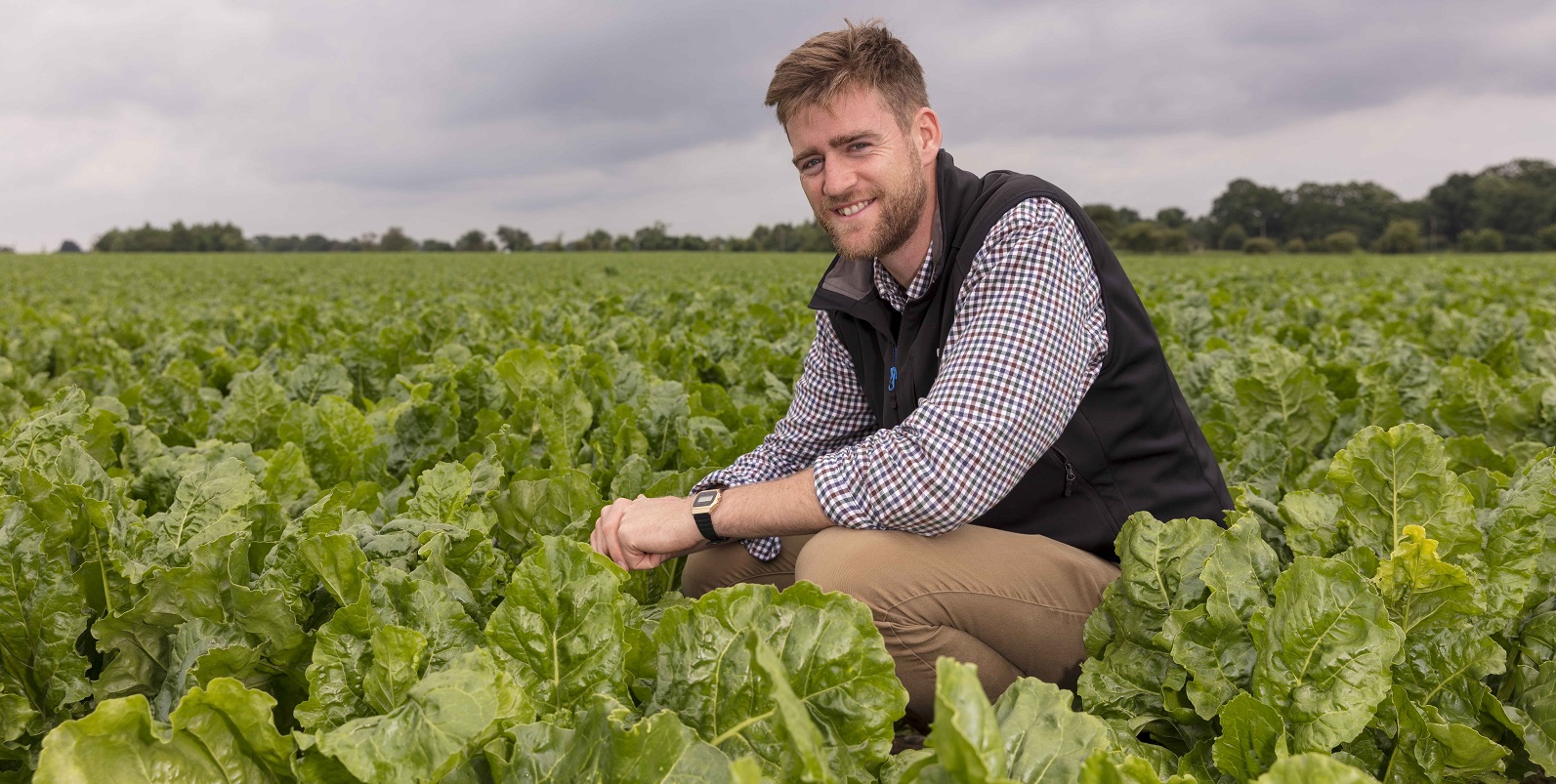 As sugar beet crops reach full canopy, thoughts must now turn to disease control and keeping canopies clean through to the end of the summer.  The three main disease threats to consider are powdery mildew, ramularia and rust, though the extent to which they all manifest is largely determined by conditions during the season.

Fortunately, the effect of disease in causing severe yield losses has fallen in recent years. The introduction of varieties with improved disease resistances combined with the diligent use of fungicides means crops are no longer as badly affected as they once were.

Of the three main foliar diseases powdery mildew and rust remain the principal threat to yields. As the picture below shows, powdery mildew manifests as a grey mould on the upper side of the leaf which can quickly cause the outer leaves to be lost. It is a disease that exploits stressed crops as was the case in 2018 when the early summer drought led to a high incidence of powdery mildew. 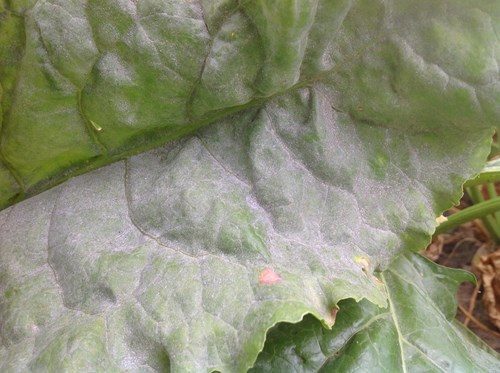 While conditions this season may not be to the benefit of powdery mildew, this does not mean crops are not at risk. The principal disease threat in recent years has been rust. Its onset varies depending on the weather conditions during the season, but typically occurs towards the end of July. There have been instances of rust emerging far earlier, however. One of the earliest confirmed instances being in 2017 when rust was reported on 7th June, so with conditions potentially favourable to disease sporulation, growers should be inspecting crops regularly in readiness to apply the first fungicide. 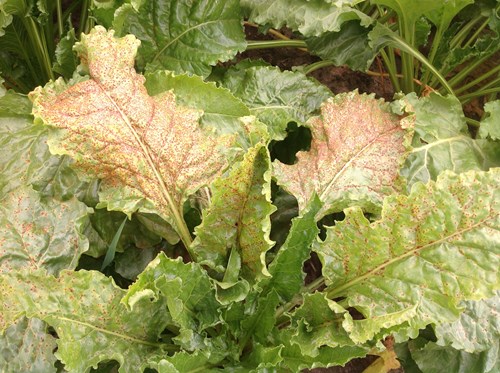 Rust, displayed in the picture above, manifests as orange/brown pustules on the upper side of the leaf surface.  It can lead to yield losses of up to 14%.

Getting the best from Escolta

Good disease control and yield protection come down to application timing. Fortunately, research performed over the past 10 years has shown when best to apply fungicides for effective disease control and canopy protection. Research suggests all crops should receive a minimum of one fungicide with those lifted after October receiving two.

It is important to note that fungicide timing should be determined by disease onset, not a calendar date.  Once disease is detected or reports confirm it is circulating, Escolta (cyproconazole + trifloxystrobin) should be applied at the full rate. It is important to maintain water rates to ensure the spray penetrates the whole canopy.

The first spray should be followed up with a second application of Escolta, also at the full rate, roughly four weeks later. Again, timing is important - delaying it can reduce its effectiveness. This will keep canopies clean into September and October. In addition to protecting yield potential, a clean canopy will continue to support sugar accumulation and root growth into the autumn.

In trials spanning more than 10 years the average yield response from two applications of Escolta has been an extra 9.6t/ha compared with the untreated. For those with sugar beet on a contract price of £22.50/t, this means an extra £216/ha in enterprise output. It is a level of return not matched by any other broadacre crop. 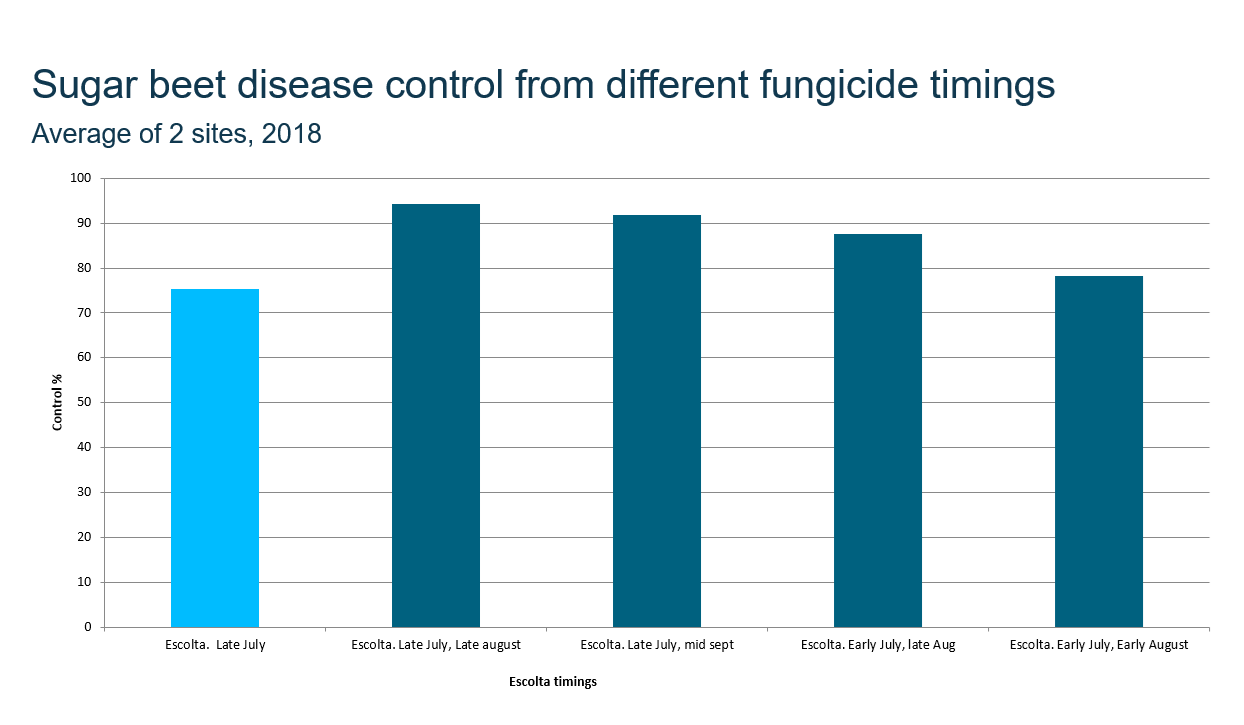