The withdrawal of neonicotinoid seed treatments makes establishment a race to reach mature plant resistance in record time. Nothing can be allowed to get in the way of the crop’s natural defences kicking in as quickly as possible.

This is all about being as kind to the crop as possible. Anything that undermines plant development such as poor seedbed preparation, miss-timed fertiliser application or the use of herbicides with poor crop safety profiles will all hinder plant development.

For Norfolk farm manager and entrant of the Bayer Beet150 yield competition John Benton of Billockby Farms Ltd near Acle, this means getting it right from the outset.

Across 1800 ha the business manages 260 ha of sugar beet with a view to meeting a contract allocation of 21,500 tonnes at an average yield of 83t/ha. To ensure the farm has the best possible chance of meeting this contract Mr Benton has prioritised seedbed preparation, timely application of nitrogen and early weed control as the basis for success. 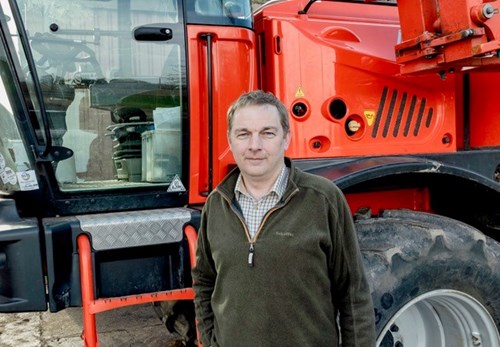 “All the recent guidance highlights the importance of seedbed quality in getting the crop off to the best start and in this respect we are fortunate. Our sandy-clay loams are easily worked, and level seedbeds easily achieved. While they can be slower to warm up than some soils further inland, germination is reliably high,” says Mr Benton.

Spring seedbed preparation is carried out around liming which is performed in two stages. LimeX is typically applied prior to ploughing in the autumn with a surface dressing of ground chalk applied in the spring and incorporated with a shallow-tined cultivator, ahead of drilling.

Once conditions are favourable, typically towards the end of March, he aims for 100,000 plants/ha by sowing at about 1.15 units/ha on 45cm rows.

“Once drilled we apply roughly 80kg N/ha with a trace amount of liquid sulphur fertiliser as we find the crop benefits from the more accurate placement this enables. This is complemented by a further 40kg N/ha as solid AN once the crop reaches two-true leaves.”

Nitrogen’s sole purpose in sugar beet is to promote canopy development so must be applied early. To reach the target leaf area index (LAI) of three the crop needs 30-40kg N/ha for each unit of LAI. Soil Nitrogen Supply (SNS) should be considered when calculating application rates.

“We moved away from pre-ems several years ago as they were adding cost but little benefit. Instead, we follow a three-spray post-em programme. The first application is at cotyledon stage, so crop safety is a priority. The focus at this timing is broadleaved weed control so a mix of Betanal maxxPro (phenmedipham + desmedipham + ethofumesate + lenacil) + metamitron is applied,” explains Mr Benton.

The second post-em application is expanded to consider volunteer potatoes, cleavers and oilseed rape. This involves a higher rate of Betanal maxxPro with the addition of Dow Shield or Vivendi (both clopyralid) + Debut (triflusulfuron).

For the final application, typically early to mid-June, rates are pushed a little higher as the crop is strong enough for the negative effects of phytotoxic herbicides to be less of a concern. This enabled a switch to an SE formulation of phenmedipham + desmedipham + ethofumesate.

“There is no single action that will remove the threat posed by virus yellows, but through sound management decisions and with a little bit of help from Mother Nature, we stand a good chance of making it through to mature plant resistance without too much damage to the crop,” says Mr Benton.