During February 72% of samples assessed in Bayer’s SpotCheck initiative were found to be infected with light leaf spot. The SpotCheck initiative, a free oilseed rape leaf-testing service in the UK, found varying levels of disease across the country, with the highest level of disease – 84% of plants infected by light leaf spot three days after incubation – in Herefordshire.

The high incidence of light leaf spot appearing in crops is likely a result of autumn spray activity coming to an end, says Gareth Bubb, a Commercial Technical Manager at Bayer. He observes that while many of these crops appeared disease-free in the field, they demonstrated clear light leaf spot symptoms after incubation.

“In the Herefordshire area we are receiving a lot of reports of light leaf spot in crops, where autumn sprays are running out of steam. My advice would be to apply a fungicide with light leaf spot activity as soon as possible, such as Proline (prothioconazole),” says Mr Bubb.

“For those considering delaying spraying until green bud, I would urge them to consider going now with a light leaf spot fungicide, using plant growth regulators where needed, and then delaying the green bud spray until yellow bud to provide some early control against Sclerotinia.” 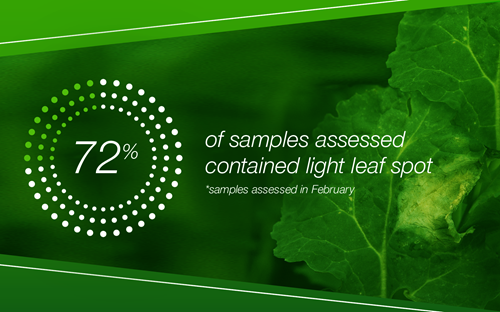 Philip Walker, Arable Plant Pathologist at ADAS, explains that the high level of light leaf spot is partially a result of the unseasonably warm weather during February – including the warmest day in February on record.

“We usually see an increase in the levels of light leaf spot as temperatures rise in early spring. The time period from infection to visible lesions shortens under higher temperatures and the latent period is approximately 15 days at 12 - 15°C.

“The unseasonably warm temperatures experienced at the end of February would have contributed to the rapid development of light leaf spot symptoms. At early stem extension, infection levels of 15% plants affected cause an estimated 5% yield loss. As a result, it is vital to walk fields, check crops for light leaf spot symptoms and utilise services like the SpotCheck initiative to help with identification and confirmation of the disease.”

We know that growing oilseed rape can be challenging so we have gathered together everything you need to know about oilseed rape.

The SpotCheck initiative is back to support growers and agronomists in the identification of the notoriously difficult to identify light leaf spot (LLS).