For James Harrison of EG Harrison & Co., potato cyst nematodes are such a threat to business performance that populations need to be managed at every opportunity.

Rotation is the basis for control and resistant varieties are considered vital, but nematicides are also an essential part of an integrated programme.

Farming more than 300ha of processing potatoes across North Norfolk, much of which is on rented land, Mr Harrison has a focus on keeping populations under control so that more land close to the farm’s base near Cromer can be utilised without having to rely on that further from the farm.

Importantly, reducing multiplication rates also means he can crop more of the ground making up his own 400ha farm thereby utilising his own irrigation licences without needing to buy or trade permits with others.

“I welcome another means of controlling PCN and the favourable environmental profile of Velum appeals to our processing partners,” says Mr Harrison.

Given that the business grows a broad range of varieties for specialist end-markets, another appealing feature of Velum is the absence of a long harvest interval.

“The intention is to expand the area of potatoes in the rotation as we have the capacity to manage more than the 36ha grown on the farm currently. With earlies constituting a part of our activities and the inability to use granular nematicides with these varieties due to the harvest interval, I am wary of the long-term implications to the business if we expanded the area of potatoes without having all the population management tools available. Velum combined with the development of more resistant varieties will help to overcome this concern,” he says.

In the spring of 2018 EG Harrison & Co trialled Velum Prime on an area of land that after surveying was found to have a PCN count of 3 eggs per gram of soil.

A crop of Innovator, a variety with good resistance but poor tolerance to Globodera pallida, was selected for this field as resistant varieties are an effective means of managing populations.

Post-harvest soil testing found populations as measured in eggs per gram of soil had been fallen by 17%, a result Mr Harrison regards as highly positive.

The result builds on a replicated trial performed in 2016 using Lady Claire in a commercial crop of Performer. The results, displayed in the chart below, found Velum in sequence with Vydate 10G at half-rate (27.5 kg/ha) gave the best yield protection. 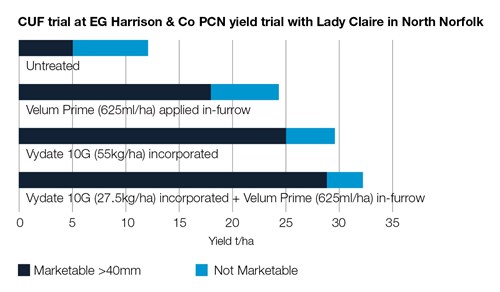 “The yield result was highly encouraging. From a marketable yield of just 5.3t/ha for the untreated crop to 28.1t/ha for the sequenced treatment of half-rate Vydate 10G followed by Velum applied in-furrow is most rewarding. This is 2.6t/ha higher than the full-rate Vydate 10G-only treatment,” he says.