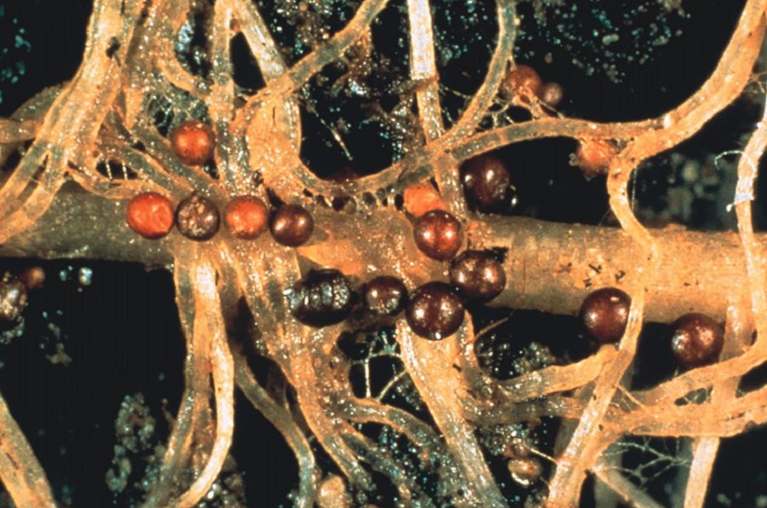 Potato cyst nematodes are not visible to the naked eye but the egg containing white cysts (pallida) or golden cysts (rostochiensis) can be found on the roots of potato plants. These closely related species can both be present in the same fields.

The individual cysts may contain up to 600 eggs each with a coiled-up nematode larva. When triggered by chemical exudates from a host crop, which signals the presence of suitable food, the larvae in the cysts hatch and leave to start feeding. They move to the rootlets of host plants which they invade. The sex of the larvae is only determined once feeding starts. As the females mature they start to swell and surrounding plant tissues are split. Eventually their bottom half ruptures the outer skin of the root leaving the 'head end' attached. They are fertilized by the males, which are free-living in the soil. At lifting the cysts fall off the roots into the surrounding soil. The outer coat of the cyst matures to a reddish/brown colour which protects the developing larvae. There is normally 1 generation per year. Approximately 30 % of the G. rostochiensis and 15 % of the G. pallida cysts break dormancy every year but decline is variable and cysts can remain viable for up to 10 years. In the presence of a host crop and in suitable conditions PCN has the ability to multiply from a low level by a factor of as much as 80 times where no control measures are used.

PCN is an important economic pest in most areas of the country where potatoes are grown. Damage occurs as the larvae disrupt the root’s ability to function normally, and the crop responds by developing new roots. Severe PCN attacks can lead to complete loss of yield especially in low lying wet areas of the field. The extent of the yield loss will depend on the population of PCN in the field. There are two nematodes responsible for causing damage: G. rostochiensis – pathotype Ro 1 G. pallida – pathotype Pa 2 or Pa 3 Resistance to G. rostochiensis (pathotype Ro 1) is relatively easy to breed into a potato variety as it only depends on a single gene. Resistance to G. pallida (pathotypes Pa 2 or Pa 3) is more difficult to achieve by breeding because it depends on more than one gene and is best partial, usually in the range 60-90 %. Some varieties, such as Cara and Maris Piper, have resistance to G. rostochiensis. A resistant variety is not immune to attack by PCN and the nematodes are still able to migrate into the potato root causing subsequent feeding damage. However in these resistant varieties the females fail to reach maturity and are unable to form cysts, so that multiplication is zero. This resistance mechanism is restricted to G. rostochiensis only and can lead to increase in the G. pallida population within the field. The varieties Nadine and Sante have some dual resistance to Ro 1 and Pa 2/3, however the resistance to Pa 2/3 is not complete and the variety is also moderately sensitive to nematode attack such that nematicides are recommended when growing this variety on soils with moderate to high PCN counts.

All varieties of potatoes are attacked by PCN, which even at low infestation levels do damage to potato roots and probably kill some of them. Some varieties are more sensitive to this process than others and will lose yield accordingly. Maris Piper and Cara have been classified as being least sensitive compared to Pentland Dell which is highly sensitive to damage.

Accurate soil sampling is essential in areas of the country known to be infected with PCN. Various different organisations provide a soil testing service and give guidance on the number of eggs found per gram of soil and the potential crop yield loss. In addition some end users (processors, packers or supermarkets) have different protocol recommendations for PCN soil sample thresholds to support the use of nematicides.