During January, varying levels of disease were identified by the SpotCheck initiative, a free oilseed rape leaf-testing service in the UK. While the highest incidence of light leaf spot (57% of plants within the crop infected three days after incubation), was detected in Angus, Scotland, samples in Dorset and Hampshire on the south coast were found to contain up to 23% light leaf spot incidence. This demonstrates that while traditionally a ‘disease of the north’, light leaf spot should be a concern to all oilseed rape growing regions in the UK. 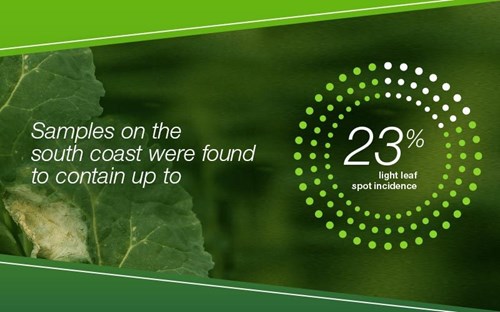 Rosalind Martin, CTM at Bayer, says “with over a third of samples displaying light leaf spot symptoms after incubation, now is the time to be out walking the crop and looking for disease.

“I would recommend focusing on assessing on-farm varieties with the lowest light leaf spot resistance scores and working back from there. There’s no threshold for light leaf spot, but it is a polycyclic disease that builds very quickly in the crop, so my advice would be to use a treatment such as Proline (prothioconazole) as soon as you see symptoms – if it is possible to travel, which may be a complicating factor this month.”

Philip Walker, Arable Plant Pathologist at ADAS, agrees now is a critical time for disease management in the crop, with visual symptoms becoming more prevalent. He says that light leaf spot is a notoriously difficult disease to identify and can easily be confused with other symptoms such as frost damage or fertiliser scorch.

“In these early stages of disease development, look for tiny white spore droplets on the leaf surface, almost like salt grains in appearance, which can sometimes appear in a circular pattern, on an otherwise healthy looking green leaf. Remember that symptoms can be present on the upper or underside of the leaf as well, so be thorough in your assessments,” he says.

Ms Martin adds: “If there is any doubt of what disease symptoms you have in the crop, then consider utilising the Bayer SpotCheck service, to attain a definitive diagnosis of disease within the crop.”

After a successful first season, the SpotCheck initiative is back to support growers and agronomists in the identification of LLS.