As direct payments are replaced with environmentally-focussed support, Crop Focus examines how to make this work within a productive arable enterprise.

This year sees some significant milestones in the ongoing rollout of the Environmental Land Management Scheme (ELMS), as new measures are launched, while Basic Payment Scheme (BPS) cuts continue.

English BPS will have halved in value by 2024, with the last small payment due in 2027, leaving a massive hole in farm finances that must be plugged. Forecasts from Andersons’ Loam Farm model, a hypothetical 600 ha combinable cropping farm, suggest BPS loss will total £63,465 next season and £84,435 by 2024. 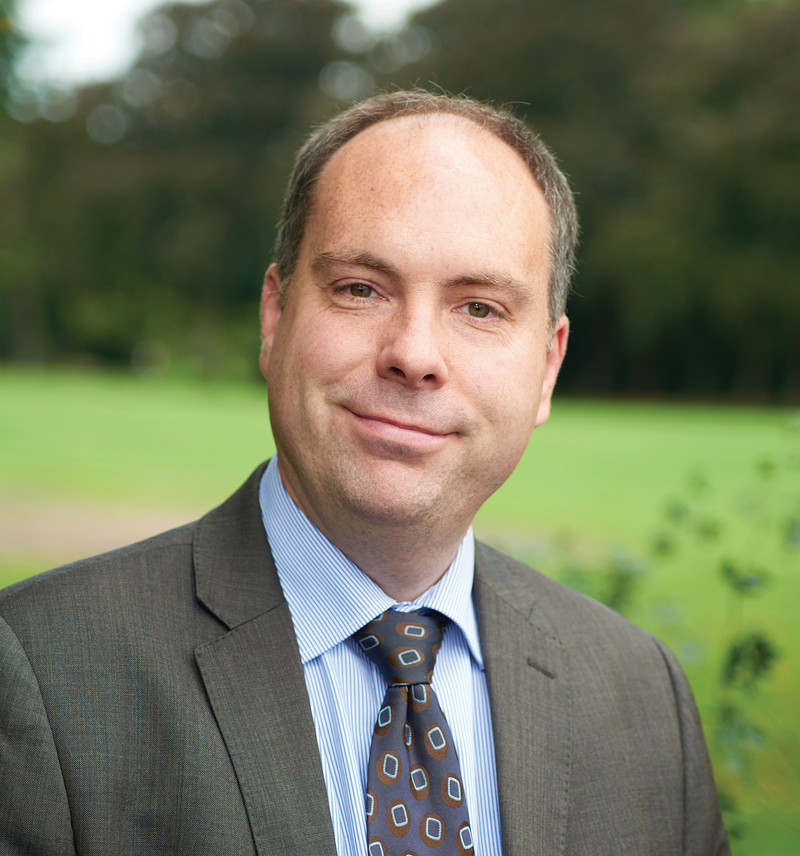 The Arable & Horticultural Soils Standard is the first major option to be rolled out in England this year, offering quarterly payments ranging from £22 /ha for ‘introductory’ measures to £40 /ha for the intermediate level (a higher level is due in 2023).

For Loam Farm, Mr King says net revenue from the introductory measures within this scheme (after costs of implementing options), will only total £10,965 for 2023, highlighting the need to fully explore all available income sources, and potentially target intermediate and higher-level options when available.

Mr King says the Countryside Steward-ship Scheme (CSS) offers an ideal “bridge” to ELMS, with time still to apply for agreements starting on 1 January 2023 – the application period for which closes at the end of July.

“Even if you’ve rejected CSS in the past, it’s worth having another look, especially as rates have been revised this year and there’s a simplified version in the Wildlife Offer. As new schemes open within ELMS, it will be possible to exit CSS early and transition across.”

Although the withdrawal of BPS has been delayed in devolved regions, there is a similar policy shift away from direct support to environmentally-focussed payments.

So, with more pressure to join environ-mental schemes, whether CSS or ELMS, how do you maximise the benefit to the farm business and the environment?

“From a pure business perspective, you want to maximise the financial benefit for the least financial cost,” says Mr King. “Generally, that means focussing schemes on areas of less productive or loss-making ground.”

Most farmers have a good idea of where poorer, or difficult-to-manage areas are, but digital mapping systems such as FieldViewTM offer a valuable way of quantifying performance over multiple years and crop types, to build a true picture of field performance, as Lincolnshire farmer Chris Baylis is doing (see page 7).

Alongside real-time yield mapping data, FieldView users can access satellite imagery dating back to 2017 within just a couple of hours of signing up to the service, notes Bayer’s digital activation manager Max Dafforn.

“It’s amazing to see that even many months back from harvest you can identify how different areas of a field are likely to perform.”

Maps can be compared side-by-side within FieldView, or data can be easily transferred into systems such as Gate-keeper or Omnia thanks to full integration with these platforms. This allows more in-depth analysis of crop performance over multiple years and crop types, allowing adjustments for seasonality. Variations in cost of production within fields can also be mapped when crop management information is combined with financial data, Mr Dafforn says.

Growers can then go into the field to examine poorer performing areas closely and identify whether the causes are rectifiable (such as poor drainage, compaction, low pH, or nutrition), or whether the area is inherently lower-performing and is better put into stewardship or other uses.

Budgeting functions also allow growers to alter prices for inputs and outputs to experiment with ‘what if’ scenarios before making long-term decisions about removing any land from production, he says.

While crop performance and financial considerations often drive decisions about where to locate stewardship measures, Prof Richard Pywell from the UK Centre for Ecology & Hydrology (UKCEH) says farmers must also consider what is best for the environment and biodiversity.

“The real win-win is to identify consistently low-yielding or poor-performing areas that are also well suited to deliver some environmental benefit, whether that’s habitat for pollinators, watercourse protection or wetland creation to reduce flooding risk.” 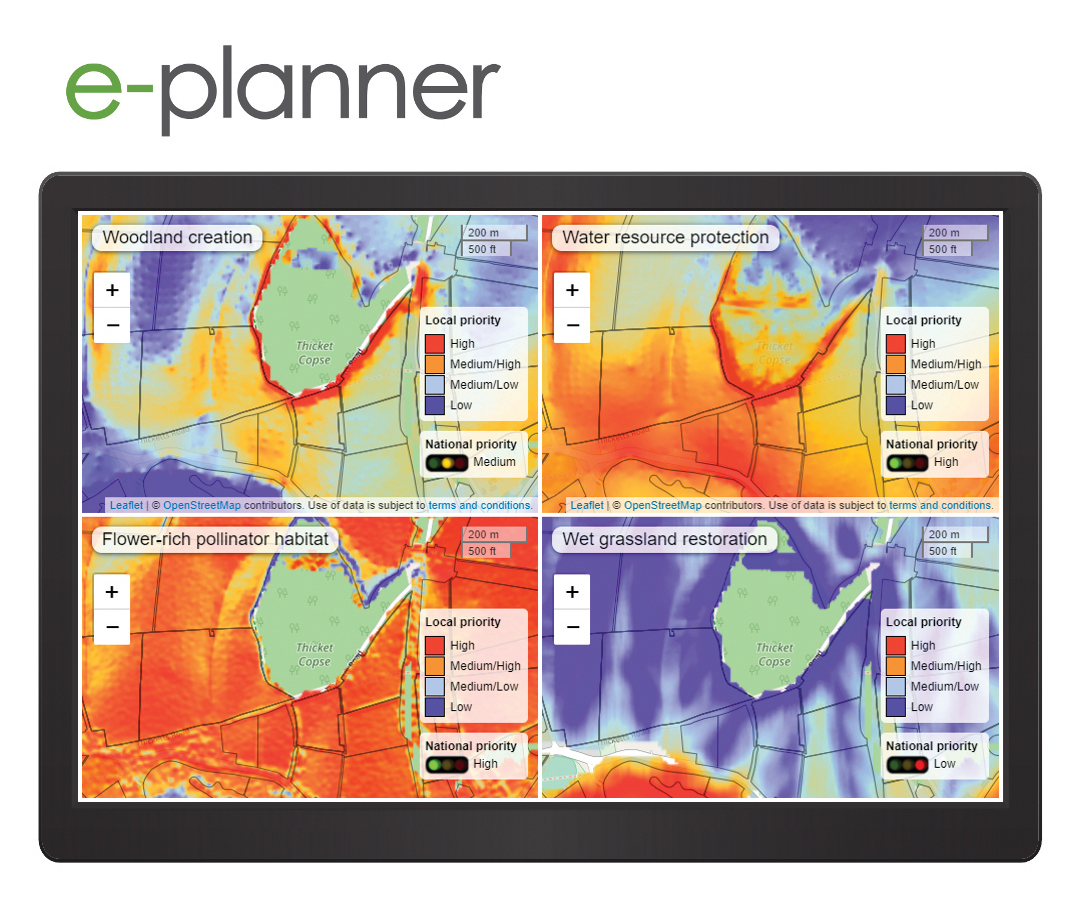 The tool calculates suitability based on factors including topography, soil type, shading, and the proximity to watercourses and other semi-natural habitats in the landscape.

“We’ve field-tested it with experienced agronomists and there’s a good relationship between how they rate the suitability of different areas and the rating the tool generates, so we’re confident it will save time for growers and agronomists by allowing them to focus attention on specific areas.”

Comparing E-Planner maps with crop productivity maps should allow farmers to quickly identify areas where there is the greatest potential benefit financially and environmentally, he says.

Mapping environmental potential in this way could also allow a more collaborative approach to stewardship planning on a landscape-scale across neighbouring farms, he adds. This will be particularly important for the next two tiers of ELMS, the Local Nature Recovery and Landscape Recovery schemes. 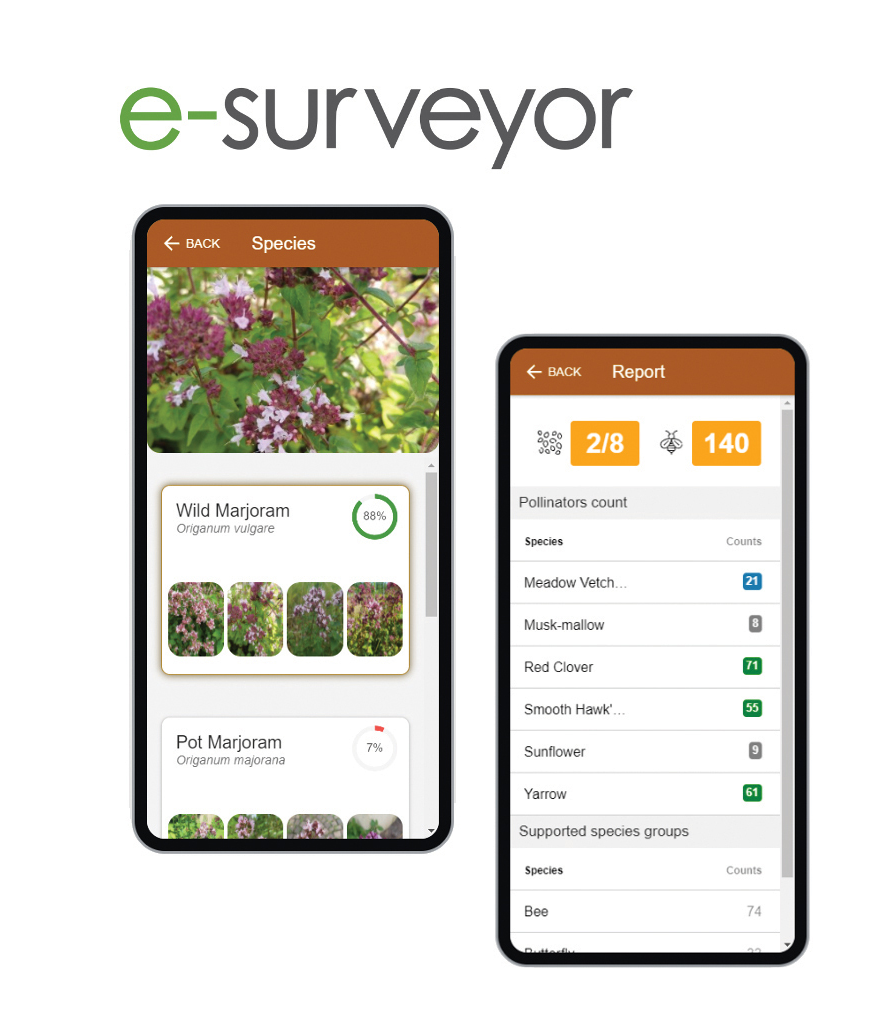 UKCEH will also shortly be launching a free mobile app (E-surveyor) that uses image recognition technology to
identify different plant species and help farmers monitor the effectiveness of stewardship measures. In future it hopes to extend this technology to include monitoring of beneficial insects and farmland birds.

Prof Pywell concludes: “The UK farming industry has been pretty advanced with adopting precision technology, so why not bring some of this precision to environmental management?” 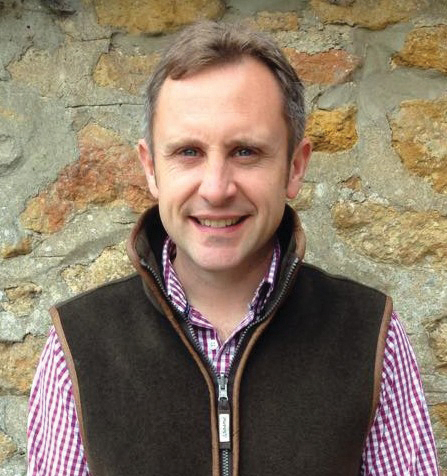 Environmental stewardship already accounts for around 10% of the 5,800 ha farmed by Sir Richard Sutton Estates and another 10% could go into new schemes as the business looks to offset BPS cuts.

“Long before ELMS was first discussed, we knew BPS would be targeted, so set out to create a farming model that would be sustainable without direct support. We’re constantly reviewing and challenging everything we do.”

Efficiency improvements and economies of scale are key to long-term sustainability, with greater integration of the two main farming units in Lincolnshire (3,600 ha) and Berkshire (2,200 ha).

“We’ve kept separate labour and machinery, but our farming strategy and approach to buying/ marketing is managed as one.”

Conservation also features heavily across the estate. When two large Higher Level Schemes expired two and three years ago, they were both rolled over into the Mid-Tier CSS as a transition towards ELMS. Stewardship options include 6 m margins around every field, woodland and hedgerow management plans, winter bird food and spring/ summer pollen & nectar mixes.

“It’s a complete holistic approach that works well operationally and has resulted in a significant improvement in wildlife,” Mr Baylis says.

However, he knows more must be done to mitigate the loss of BPS, so baseline biodiversity and carbon audits have been conducted, alongside mapping the estate’s natural capital. He is also using FieldView and Gatekeeper to develop five-year performance maps for every field to identify consistently lower-performing areas that may be better put to other uses.

“Some of the new [ELMS] measures could be quite restrictive, so if we’re going to take another 10% of land out of production, we have to be confident that land is genuinely underperforming, understand why that’s the case, and see if it can be rectified or not.” FieldView’s yield data, combined with crop input information in Gatekeeper allows gross margin maps to be generated, which when stacked together, can highlight performance differences that go beyond seasonal variations, he says.

He plans to take this further, by using FieldView’s application mapping with Gatekeeper’s costings to generate maps showing variations in cost of production within fields.

“FieldView has accelerated the way we can bring information from the outside back inside.”