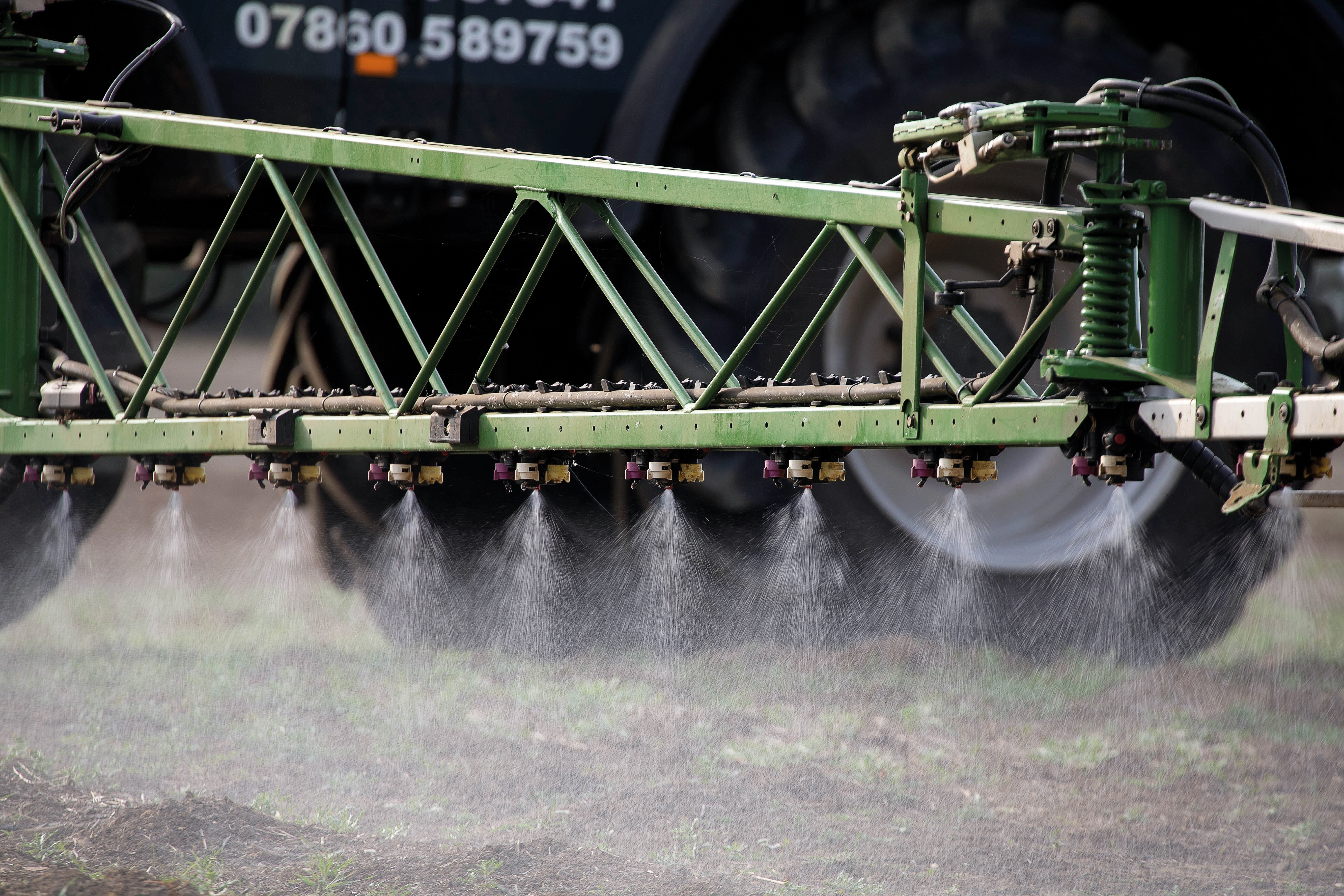 Maximising spray performance requires much more than just choosing the best product for the job – application is equally crucial.

To understand how sprayer operators approached common spraying activities across a season in cereals and oilseed rape crops, we surveyed them about the water volume, spray quality, nozzle type and forward speed they were using. From just over 50 respondents, these were the main findings. The charts below illustrate the responses for 12 different spraying activities listed.

Timeliness is a prerequisite for efficacy, and lower water volumes help speed work rates and maximise the area covered on spray days. So it is not surprising that for eight of the 12 spray activities in the survey, 100 L/ha was the go-to water volume, with cereal fungicide sprays and a second application of glyphosate to over-wintered stubbles having the highest proportion using that water volume.

Operators are more commonly using 200 L/ha for oilseed rape desiccation and pre-emergence residual herbicides in the autumn. While the typical label recommendation for pre-emergence residuals is 200 L/ha, independent sprayer application specialist Tom Robinson, suggests lower water volumes could be used for this task.

“There’s nothing wrong with 200 L/ha, but it’s a work rate issue. If they are missing spray timings because of it then I would recommend 100 L/ha, as in my own trials there has never really been a difference between the two.

“Where I would use 200 L/ha is if you are using 90% drift reduction nozzles as their performance can drop off significantly at 100 L/ha. With very coarse sprays you don’t get many drops per litre of spray, decreasing coverage. That’s why you compensate by upping the water volume.” 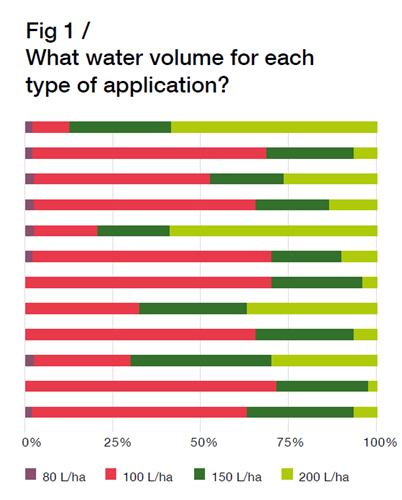 Air-inclusion nozzles are the go-to spray nozzles for most applications, with at least 50% of operators using them for each task. “I’m glad to see the influence from better nozzle technologies,” Mr Robinson says

“For most sprays, a smaller drop air-inclusion nozzle is the most effective choice, as well as being non-drifty,” he says. “It’s encouraging that many are using them when the labels suggest using fanjets.”

He suggests manufacturers should be thinking differently about registration trials to add small droplet air-inclusion nozzles to the label. 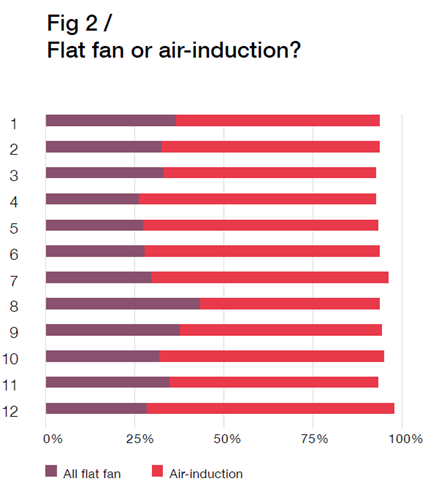 Angling nozzles can increase product efficacy, Mr Robinson says, so he is encouraged by the majority using angling for eight of the 12 applications surveyed.

“I wouldn’t normally recommend angled nozzles for T1 or T2 fungicides,” he says. “Many do use them success-fully though, with the key to have a clean crop at application.”

In the survey, 63% are using angled nozzles for one or both of these applications. “Angling is good when the crop is small, so up until and including T0, and very good in any broadleaved crops, like oilseed rape as it helps the spray get underneath leaves.

“But if you use them later in the season when you have a decent canopy, because they are angled they won’t squirt down into the canopy, so if you have disease in the bottom you’re not getting the chemical down there.” 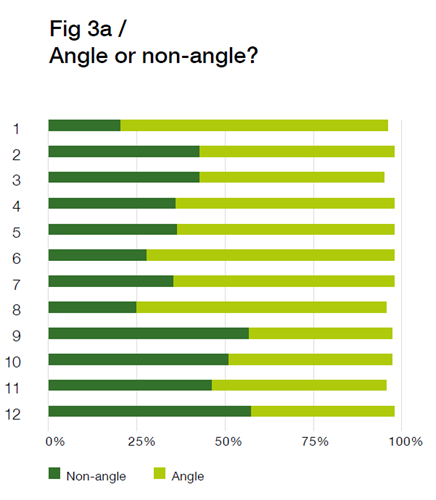 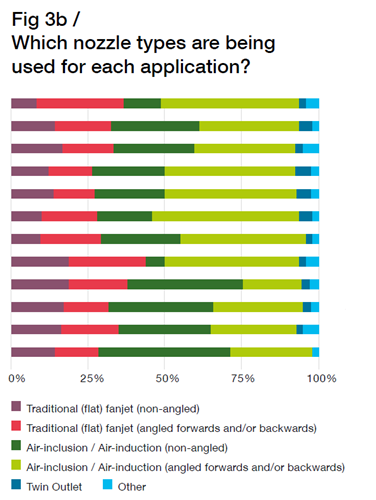 While most are using air-inclusion nozzles for each job, which typically produce a coarse spray, only 1% in our survey said they were spraying a coarse spray for each task, and just 12% medium-coarse.

This perhaps suggests a disconnect or confusion over spray quality, says Mr Robinson. “It’s very improbable those using air-inclusion nozzles are getting a medium spray quality or finer.”

But it probably does mean operators are choosing nozzles, such as the Guardian Air, that give finer sprays than some other air-inclusion nozzles, he suspects. “It is a good nozzle – you do get a lot of drops from it, they won’t cause you any trouble drifting off, and the air inclusion drops stick well to the target.

“When you do spray measurements, for almost all targets except tiny black-grass, you recover more spray with a ‘small’ drop air inclusion nozzle than you do with a fanjet.” 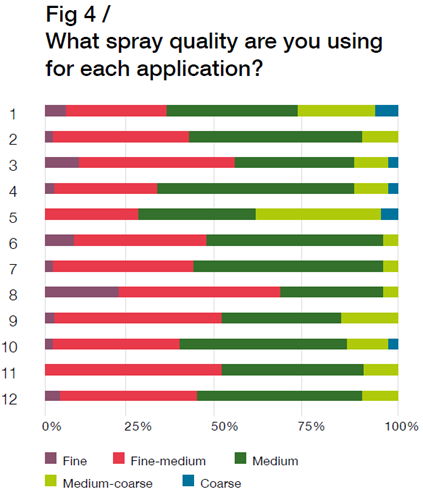 A sensible compromise between work rate and efficacy has led most sprayer operators to use 12 km/h, according to the survey.

“Herbicide performance can drop off the quicker you go,” Mr Robinson points out. “So, it’s good that operators have responded to the message of not going too fast for pre-emergence autumn residuals.

“The only reason to go faster is work rate. There is more flexibility with forward speeds for fungicide applications.” 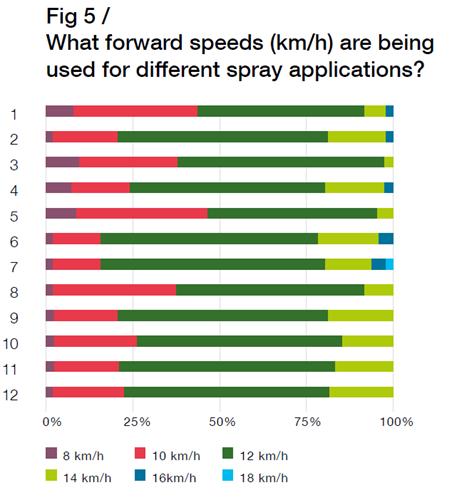