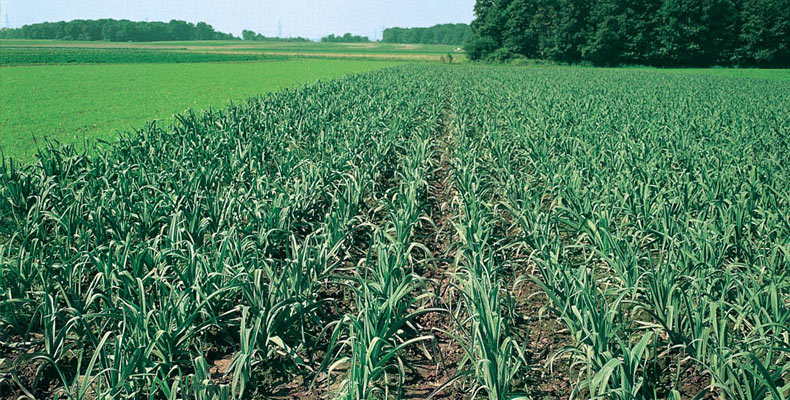 The inclement weather that has dominated the first half of summer 2021 has increased the disease pressure facing crops with reports of foliar infections in brassicas and alliums.

The situation facing growers is compounded by the late spring delaying planting and slowing emergence and establishment. Under less favourable disease conditions, crops could be left to grow on before needing protection but with repots of ringspot (Mycosphaerella brassiciola) in Brussels sprouts, programmes will need to commence earlier than typically planned.

Downy mildew (Peronospora destructor) is now starting to be found in some spring onion set and spring drilled crops. Late infections in set crops aren’t usually too much of a problem, however infection in spring drilled crops at this point, will mean fungicides having to work harder with more timely applications.

“The summer of 2021 could not be more different to that of last year,” says Carl Sharp of the Allium & Brassica Centre. “Across the east of England, ring spot is the dominant disease, but there are pockets of dark leaf spot (Alternaria brassicae) too.”

Although the two diseases can be found at the same time, they differ in the length of time needed for infection to occur.

“Dark leaf spot requires a longer period of leaf wetness – typically 12 to 24 hours – for infection to occur compared with ringspot – just 3 to 12 hours at the same temperature range. Fortunately, the products used for ringspot tend to deliver incidental control of Alternaria, so where spray intervals can be maintained it is often controlled through preventative action,” says Mr Sharp.

“It takes only three to five hours of leaf wetness under favourable conditions for disease to build and serious infections can result in a marked reduction in growth,” he says.

A disease of increasing concern is light leaf spot (Pyrenopeziza brassicae) which has been spreading south from Scotland where it is an established threat.

“We are seeing more of this with each season, and it can be a serious problem. While there are products that offer partial control with Rudis (prothioconazole) perhaps the best of those available, nothing delivers the level of protection needed to properly get rid of it.  Where it does become established, it leaves a blemish akin to a dirty thumbprint on the crop which can be unsightly,” says Mr Sharp.

Cultural control measures are often promoted as a means of improving the sustainability of intensive production systems but while progress has been made in some areas, disease control is distinct from other crop threats.

“Integrated strategies rely on effective cultural measures and while there are instances where bio-stimulants and foliar feeds have been shown to support the efficacy of certain fungicide products, cultural techniques used to control weeds or pests have minimal effect in managing diseases, but they do reduce some of the vectors,” says Mr Sharp.

Systems such as Brassicas Alerts, which uses weather data and spore trapping to inform application timing based on an analysis of the forecast risk, remain some of the best techniques available and can support timely fungicide applications while also justifying use.

“Forecasting tools have not only supported more targeted and appropriate use, but also resulted in a reduction of the volume of fungicide applied in a typical season,” observes Mr Sharp.

This has driven an evolution of sorts in how growers and their advisers approach disease control. There are fewer products available than was the case only five years ago and many of those that remain are based on either the same active substances or the same mode of action group, all of which raises the need to be mindful of loading limits and the importance of active resistance management.

A typical Brussels sprouts programme would begin in mid-July with fungicides applied every 14 -21 days. With spore trapping we can target sprays which gives us the confidence to drop applications from the programme.

“There have been instances where the same level of marketable crop produced under a conventional regime consisting of four sprays at regular intervals has been achieved with just two well-timed fungicides,” says Mr Sharp.

Using decision support systems to their full potential increases the need for appropriate application timing and use of the better-performing products as the basis of a programme.

“Timing is key but using strong products such as Rudis and Nativo 75 WG (tebuconazole + trifloxystrobin) in a smart way that targets disease when they are most needed, it is possible to achieve the desired results with less overall input,” he says.

In onions and other allium crops, downy mildew is the dominant disease of concern, but so too are fusarium basal rot (Fusarium oxysporum [onions] and F. culmorum [leeks]) and white rot (Sclerotium cepivorum).

“Fusarium and white rot are soil-borne pathogens that should not be overlooked. We have trials running at the ABC investigating various tactics, but these diseases are proving hard to control,” says Mr Sharp.

For downy mildew, Unicur (fluoxastrobin + prothioconazole) remains one of the most effective means of protecting crops.

“Unicur is the basis of a programme, but it can also be used in a tank mix, which brings much-needed flexibility, especially towards the end of the season,” he says.

Downy mildew is one of those diseases that you allow to establish at your peril as it has the potential to decimate the crop. Conditions in the summer of 2021 have so far been near perfect for sporulation. The protracted start to the season means crops will mature later and at a staggered rate.

“This means programmes will have to continue further into August and possibly into September. This will make for an interesting finish to the end of the season and is a stark contrast to last year when insects were the principal concern,” says Mr Sharp.

Despite a challenging season, Mr Sharp believes the mood among growers is reasonably upbeat.

“The biggest issue is labour availability and there is a fear among growers that this will lead to significant wage inflation as harvest approaches.  Those with big areas of broccoli and cauliflower are under the greatest pressure because the quality falls quite quickly if not harvested promptly, whereas Brussels sprouts and white cabbage are a little more flexible,” he says.

Protecting fruit crops against thrips and powdery mildew are the greatest concern of growers but finding a path to success that reflects the sustainability concerns of society and the residue limits of retailers, can be a challenge.

Bayer used the Fruit Focus theatre to emphasise the finer points of biological fungicides and insecticides and how growers should adapt practices to get the most from what they have to offer.

For Bayer, biological crop protection products are an important part of our commitment to promote the sustainable nature of food production while encouraging diversity in modern farming practices. Our collection of more than 125,000 microbial strains allows us to use genetic diversity to develop new and beneficial products for farmers around the world.