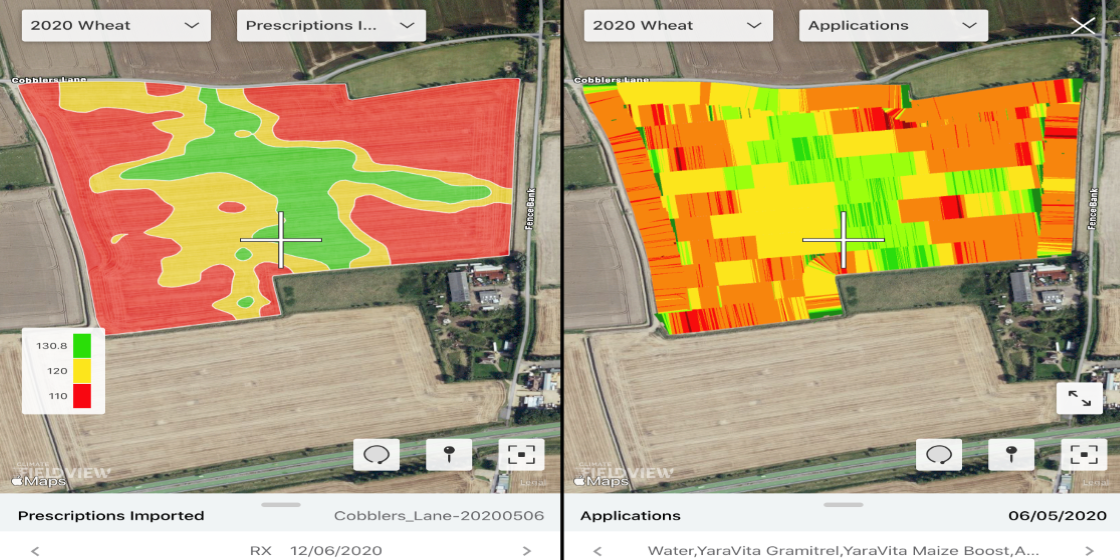 Like many farmers Andrew and Sam Melton have plenty of data, but it is putting it to good use that is important.

In the past, the ability to manage and evaluate data has been limited by incompatibility issues or complex system interfaces but digital technology is improving at staggering speed.

Andrew and Sam manage over 1400 ha, around Wisbech, Norfolk and have been using MyJohnDeere to collect machine data and Gatekeeper for farm records and now are evaluating ‘big data’ digital technology via Bayer’s Climate FieldView. By big data they mean the ability to collect prescriptive variable rate data but also analyse the benefits through overlaying it with yield data captured realtime from the combine.

It is early days but both feel it is relatively easy to get data on the platform and user friendly for farmers who spend as much time outside the farm office as in it. FieldView was first used to collect yield data from combines and Andrew and Sam were pleased that he could see field progress and yield results realtime.

That hasn’t changed any crop decisions this season but might do next, however, what it has done is demonstrate the potential. When evaluating variable rate fertiliser application from a field of wheat, the results were revealing. “The better parts of the field used 47-54 kg/n/ha to deliver a yield of 12.4 t/ha. For poorer areas, yield dropped to 10.8 t/ha but N use increased to 88-84 kg/n/ha,” notes Andrew.

Andrew and Sam like trialling products and agronomic systems and they are a AHDB network monitor farm.

They are currently in the middle of an establishment trial covering various cultivation methods including shallow or no-tillage strategies to a more conventional plough-based system. For good
measure, cover crops are being added in as part of the initiative.

The full results won’t be known until harvest, and one advantage of FieldView’s realtime connectivity is they can see yield data via the app as it happens.

But the data FieldView and MyJohnDeere will capture will give them a comprehensive picture of the different approaches. Biomass images will give an indication of trial differences through the season and it has already shown operation costs of £30/ha to £116.00/ha when machinery depreciation is factored in.

But any cultivation strategy has to work in the field in building crop resilience and yield. When the plots are harvested, they will have a complete picture to base any final decisions.

Big data also has a key role in their drive to advance precision farming further and they have just begun benchmarking field performance. Interestingly biomass maps from January correlate with yield maps the following august. Having seen the data, the question they pose themselves is how this could be used to improve poorer field areas.

What they like about FieldView is the ease with which regional field variable application data and yield can be evaluated. They can select a field area from a menu of area selection tools, or use freehand drawing to pinpoint a specific part of a field. They also like the split-screen functionality so different data can be viewed from the same field area.

But it also has advantages before any trial has commenced. “It is often the way that trials are organised on opposing tramlines but that means results can be compromised by soil variation. With FieldView we can select specific field areas to give better plot comparisons,” adds Andrew.

What has held some farmers back from trialling digital technologies is possibly the time needed to familiarise oneself with the technology.

Sam says that growers need to dedicate the time to set up systems and put aside time to find their way around any system, but he considers it worth it. “The data we get from the technology we are using will only help us refine our farm management approach, which is important with the move to more sustainable farming. But also, we’ve found data transfer from platforms like MyJohnDeere to
FieldView pretty painless.”

And he says the time spent now will pay time dividends in the future. “We’re not having to duplicate data entry so it is saving us time and going forward it will accelerate our ability to evaluate big data,
and speed up decision making,” he concludes.

The digital farming platform that helps you to maximise your productivity