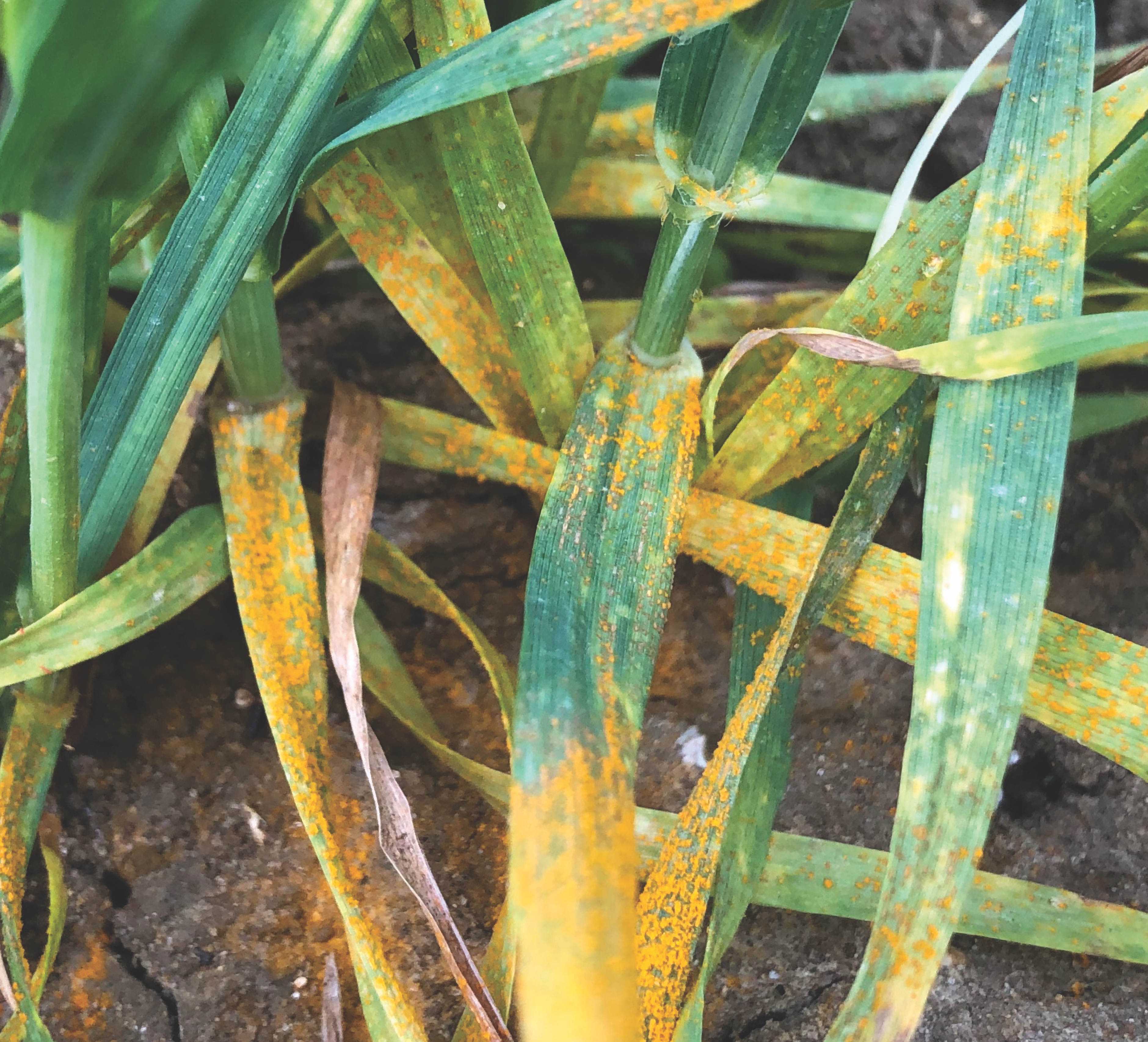 Last season provided many challenges for wheat growers, including high levels of yellow rust during March and April, after yet another damp and mild winter. This is reflected in more yellow rust samples received by the UK Cereal Pathogen Virulence Survey (UKCPVS), which totalled 306, up from 243 the previous year.

However, of most concern is the significant variability in how yellow rust interacts with the same varieties at different sites, says NIAB’s Lucy James, leader of the UKCPVS.

“The red Warrior group still dominates the UK population, but there is quite a lot of genetic diversity within that… This is reflected in what we are seeing in the field and is quite different from the past, when a particular variety might break down quickly.” 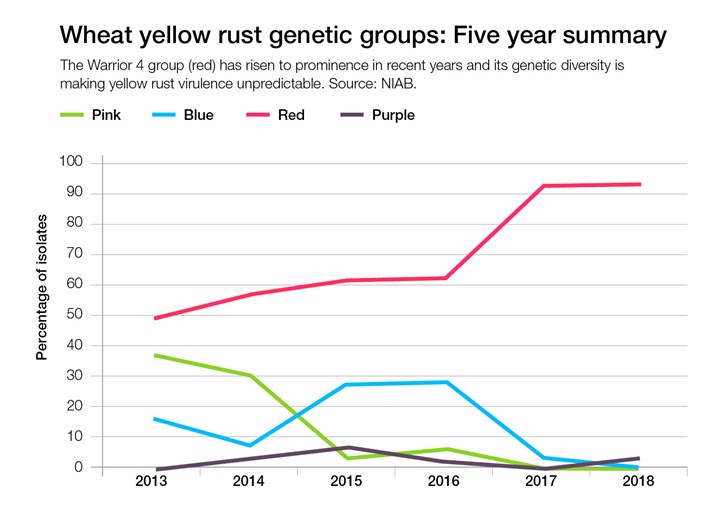 Could there be a new race of wheat yellow rust?

Understandably, there is a lag between UKCPVS receiving samples and testing data being analysed and published, so a race change had not been confirmed at the time of writing.

Also, yellow rust infection in Group 1 milling wheat KWS Zyatt, which had its resistance score downgraded from 8 to 7 in 2019 due to increased susceptibility, was much more widespread in 2020. That prompted them to warn their Agrii agronomists that any varieties in the ground with Hereford parentage were likely to become more susceptible, including KWS Zyatt, Gleam, Dunston and Shabras.

This hints at a new race, therefore indicating that growers need to be cautious when considering resistance ratings.

“The scores are an average of disease assessments across the country and designed as a guide, so shouldn’t be relied upon as an indication of local risk. You have to walk your crops,” says Bill Clark.

Is wheat with the Hereford parentage more susceptible to yellow rust?

Based on research, Agrii’s Colin Lloyd was prompted to warn Agrii agronomists that any varieties in the ground with Hereford parentage were likely to become more susceptible, including KWS Zyatt, Gleam, Dunston and Shabras.

Early warning signs indicated that yellow rust virulence might be about to change three years ago.

At each of the company’s 12 trials sites, from Scotland to Cornwall, disease is monitored on 35 handsown wheat variety tussocks. In 2017, Hereford unexpectedly showed susceptibility to yellow rust on a limited number of sites. By 2018, infection on Hereford extended to half of the sites, which attracted the attention of the company’s technical experts.

As a variety, Hereford never made the Recommended List due to poor brown rust resistance and weak straw, but was utilised by breeders as a cross for its good yellow rust resistance.

Is 2021 set to be more challenging for wheat yellow rust?

Arguably, the last big variety to break down to yellow rust was Oakley, which occupied almost a third of the British wheat acreage when a race change saw its resistance score quickly drop through the floor. Other breakdowns have occurred since – in KWS Kielder and more recently, Reflection – but these varieties only accounted for small percentages of the planted area and did not have the same dramatic impact.

Mr Simons sees a similar trend continuing, as the Warrior family of yellow rust pathotypes continues to become more complex and may catch growers of varieties with reasonable scores by surprise in some locations during 2021.

Growers should also be aware that a high Recommended List yellow rust resistance rating might be based on late-season assessments conducted once adult resistance has kicked in.

Scientists still don’t fully understand how adult resistance mechanisms work in different varieties. However, it is known that some plants can be very susceptible at the seedling stage before adult resistance manifests itself, but this varies greatly between varieties and can be as late as GS 39.

While this demonstrates genetics can eventually deal with established disease, Mr Clark warns against letting active yellow rust sit in any variety as late as the flag leaf stage, as it will rob the plant of photosynthetic potential and reduce yield.

“With such a dynamic population, you also have no idea what race it might be and the crop could be susceptible anyway, so if you see yellow rust early you have to react with a fungicide.”

Dr James says choosing a diverse range of varieties with good resistance will help reduce risk of wide-scale yield losses. However, fungicides play an essential role in managing the mixed yellow rust population which is constantly trying to overcome genetic resistance and becoming a more important disease than Septoria in some regions.

Availability of yellow rust-active fungicides has taken a dent recently, with cyproconazole’s withdrawal narrowing options at T0 and epoxiconazole – a long-term cornerstone of wheat fungicide programmes and strong on rusts – will be gone in October 2021.

Despite this, yellow rust remains relatively inexpensive to control if dealt with early and a level of protectant activity is maintained throughout the programme, AICC and Arable Alliance agronomist Andrew Wells says. Advising growers across the East Midlands, he has felt the slippage in yellow rust ratings in recent seasons, with KWS Zyatt and Skyfall notable examples.

Will using up over-yeared seed affect the levels of wheat yellow rust?

With many growers forced to use up over-yeared seed from 2019, there has been less scope to introduce more robust varieties in their place this year. Therefore, Mr Wells expects to see the disease this spring, barring a very hard winter.

Although genetics are a key component in controlling the disease, he agrees you can’t wait for adult resistance to help.

“If you see it, you have to be prepared to get on top of it. A low-cost azole like tebuconazole at T0 would be my choice where yellow rust is present. Without chlorothalonil, azoxystrobin is an option too, as it will have an effect on Septoria and takes out rust.”

The biggest responses to yellow rust control often come at T1, so rust must be factored into decision making in almost all varieties when final leaf 3 appears. It is unclear how much epoxiconazole will be available ahead of use up, but where stocks are on farm, it could feature as the primary azole where yellow rust is a concern.

“Where epoxiconazole isn’t available, prothioconazole is the obvious replacement at this timing,” he adds.

While AHDB fungicide performance data shows epoxiconazole ahead of prothioconazole on yellow rust control, the latter still offers good protectant activity against the disease, according to Mr Wells.

Adding an SDHI will improve rust control, and where he has recommended prothioconazole-based T1 sprays in the past, yellow rust has been controlled sufficiently to protect the crop through to the T2 flag leaf spray.

However, where faced with high levels of active yellow rust at T1, a cost-effective option would be to add tebuconazole to bolster eradicant activity with some products, says Bayer’s Gareth Bubb.

Strobilurins are also an option, but he points out they lack the same persistency against the disease as azoles and some SDHIs. Where spray intervals are stretched, this might result in a susceptible variety being left exposed to reinfection before protection is topped up at later spray timings.

“You can only use two strobilurin applications a season and I’d always prefer to hold one back for a T3 spray, where you get most benefit from their greening effects and it covers late-season brown rust… If opting for tebuconazole, be mindful of formulation. It’s a hard molecule to formulate and some SC (suspension concentrate) options are slower acting than EW (concentrated aqueous emulsion) and EC (emulsifiable concentrate) products.

How important is timing when applying fungicides against wheat yellow rust?

Agrii agronomist and regional technical adviser Will Foss says if the correct rust active fungicides have been applied at the right time and with tight intervals, there should be less need to chase yellow rust at T2.

Also, once the flag leaf emerges in the second half of May, conditions are usually becoming warmer and drier and less favourable for the disease. However, in very risky varieties or where brown rust is problematic, rust control should remain a key consideration at this timing, he believes.

Of the newer SDHIs, Mr Foss says benzovindiflupyr has performed comparatively well and is important in the East to protect against rusts and Septoria. However, it needs the correct partner product to optimise activity where there is active rust and/or high Septoria pressure.

This highlights the challenges wheat growers have with some of the current product portfolio, as they have to be familiar with their strengths and weaknesses on certain diseases. This can result in complex tank mixes to fill any efficacy gaps, increasing costs.

Could broad-spectrum fungicides be the answer?

Mr Foss is therefore encouraged by a pipeline of new fungicides with broad-spectrum activity, enabling growers to cover all threats with fewer products, avoiding complex and costly tank mixes.

Bayer’s Iblon will be one of the first of these new products to become available commercially, with a limited test market expected in 2021. Containing isoflucypram – a new class of SDHI that has a different Fungicide Resistance Action Committee (FRAC) classification to earlier SDHIs – it has good activity on Septoria and rusts.

Having no gaps in the armoury could see it feature at T1 or T2 in all regions and Mr Clark believes it comes at a good time, with chlorothalonil withdrawn and epoxiconazole on its way out. With a lot of talk about reducing fungicide spend by using older products, or eliminating sprays altogether, he dissuades growers from doing so, even on less responsive varieties.

The newer products coming through are very good, but they won’t always be, because fungicides will break down to resistance. You are better off using them now while they are highly effective, but adjusting the dose to the variety and disease risk to control cost.