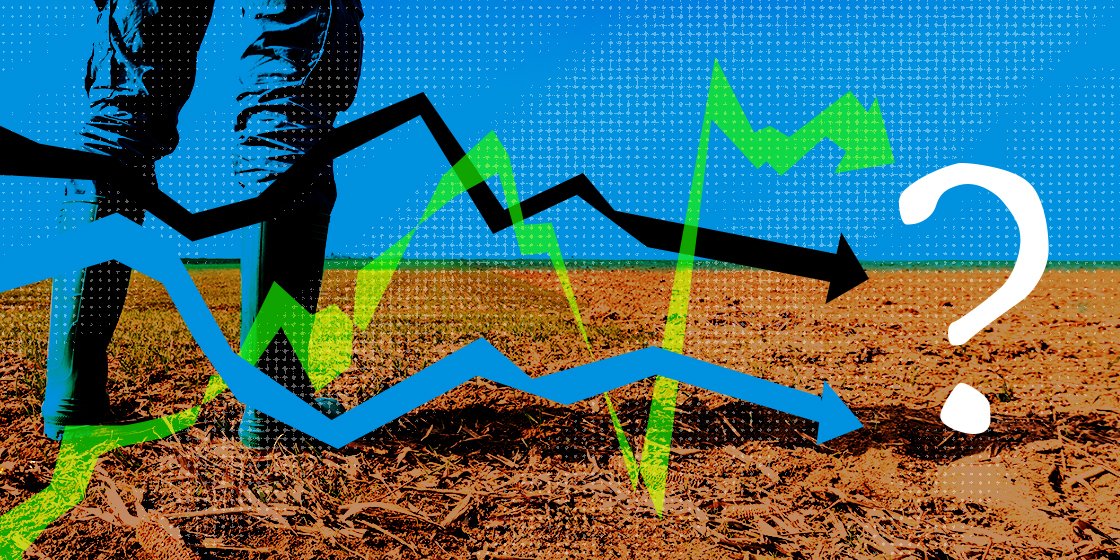 A domestic farm policy tailored to British agriculture was a tantalising promise for growers post-Brexit.

But one thing we’ve learnt since the UK officially left the EU, is the path to a new-look farm policy, and planning for long-term sustainability of the agriculture sector, is easier said than done.

Despite Defra hoping the UK’s CAP replacement would be passed by spring, the Bill made sluggish progress through parliament thanks to the general election, a change of Defra leadership, and the coronavirus pandemic.

When the Bill eventually went before parliament in May, it caused controversy as MPs voted overwhelmingly against an amendment designed to protect UK food standards from lower-quality imports.

With a trade deal still to be agreed with Europe or other global trading partners, uncertainty over how foreign labour might come into the country, and the looming threat of tougher pesticide regulation, UK agriculture’s future still feels uncertain. But amidst the uncertainty, there are spots of clarity about what the coming years could look like.

The biggest change for English growers is that direct support under the Basic Payment Scheme (BPS) will be steadily phased out from 2021, so by 2028 area payments won’t exist. 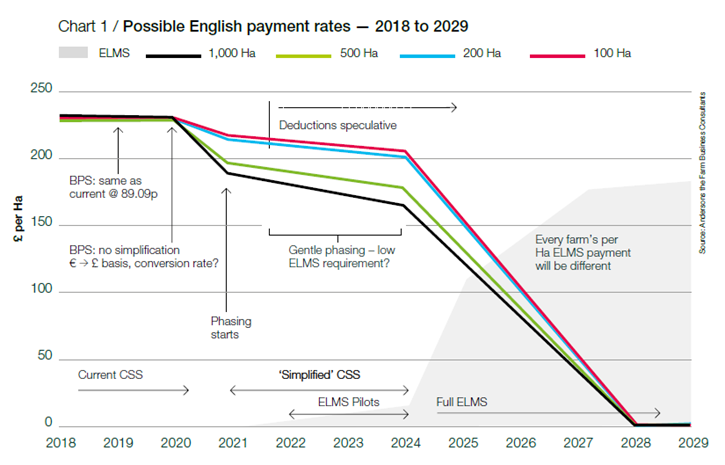 Providing value for money for the taxpayer has been a focus behind this change, but another important driver is a political ambition to develop a greener UK economy, with the government setting targets for net zero emissions by 2050 (something the NFU suggested agriculture should aim to achieve by 2040).

Aside from some pilot schemes, full details of ELMS are yet to be released. But one certainty is the schemes will create a very different business environment to that which growers have experienced for the last 10-20 years, says Andersons head of business research, Richard King:

“The coming decade could see tough times for some farm businesses, particularly those which have already been struggling with efficiencies.”

From an arable perspective, the impact of phasing out BPS on the economics of combinable crop production will be the biggest challenge.

“Everyone thinks beef and sheep farmers will be hit worst — which is true to an extent — but looking at the sectors most reliant on subsidy, combinable crops come pretty close behind grazing livestock.”

One big potential change caused by the loss of direct support and policy changes is likely to be around rents and contract farming arrangements, Mr King says. Many rent reviews have been put on hold while people wait to see the immediate effects of Brexit, but new focus on environmental measures could lead to a protracted negotiation period as land owners and tenants get to grips with the new policy landscape. “If some land doesn’t get some of the protection of a £200/ ha payment underwriting it [via the BPS], it changes what you can make from it,” he says. “From the outset, I think we’ll start seeing a greater variety in rents.

“The best land might not see much difference, but Grade three land might see some big changes.” Similarly, the introduction of ELMS could cause a land value shift, Mr King adds, with poorer quality land suddenly appearing more valuable due to the environmental payment it could receive by being used as flood prevention, for example.

“While some pilot ELM schemes are underway, the rules won’t be finalised until 2024, meaning producers face uncertain years while they wait to discover the BPS’s replacement in detail.

“We could be in for an uncomfortable time while landlords, tenants and contract farmers get to grips with what it means.”

Despite the uncertainties, Staffordshire tenant and contract farmer Clive Bailye is looking forward to the prospect of changing from direct support to environmental-focused payments. Mr Bailye switched to no-till agriculture 15 years ago to cut costs and drive profit on his rented land — land he cannot claim a subsidy for:

“I’ve always believed agricultural subsidies haven’t really subsidised farmers or food production. As a contract farmer who owns and rents some land, what we do enables a land owner to collect the payment.

“Going down the regenerative agriculture route was a financial decision for us. We needed to cut costs and grow produce with higher margins to be profitable.

“Better soil, using cover crops, increasing soil organic matter, reducing run-off and planting more legumes; all these things have been outlined in ELMS, but we don’t need to be encouraged to do them because they make sense to the system.”

Mr Bailye is concerned how new environmental schemes will be administered though, particularly if policy rewards change over long-term efforts.

“It worries me if policy might reward improvement, which penalises innovators. For example, if people are paid per percentage increase of organic matter, when that’s something we have worked on for 15 years. Payments should be action-based rather than based on results.” 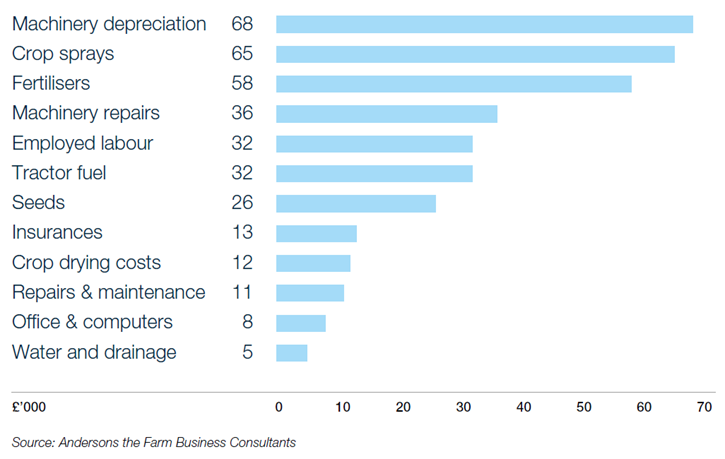 “ELMS may lead to a commercial market for carbon trading, which is exciting,” Mr Bailye says.

“The bill for the scheme might be paid for by taxpayers initially, but if you are genuinely creating something of value, it could evolve into carbon bonds, and payments could come from a commercial return.”

Mr King sees similar opportunities, but warns an agreed method for calculating carbon is needed before the public will support, and before farmers get behind it:

“The methodology around calculating carbon isn’t agreed, and until we do, there will be lots of arguments around whether it is provable.

“There’s a role for government, as a central authority needs to say ‘this is the method the UK is using’.

“Until that happens, it’s hard to know how things will move forward. Farmers will only make changes if they have a carrot or a stick. They won’t pay to make changes until they know what they are paying for in terms of carbon capture.”

Mr King says regardless which system the UK adopts, growers could find that in 5-10 years they are asked to do more carbon auditing by processors to reach certain greenhouse gas standards. This could help the arable sector prove its green credentials, particularly as more active ingredients are removed, he says.

Another area that could help growers in the battle to retain chemistry is the wider adoption of robots, Mr Bailye adds:

“I can see robots being used more widely so that agronomists are responsible for more area, but we will also have AI identifying pests and weeds with precision.

“It’ll take away any guess work and gut feeling people often go on when deciding when to treat a crop, and that’s good as it might help protect actives and defend their use.”

Essex grower Guy Smith believes the potential for robots is exciting, but the pace of future adoption will depend on crop returns:

“Even so, there’s no doubt automation will be disruptive to UK agriculture over the next few years.

“Increasingly, farm equipment will have to spread over more acres, which means more contracting, even for 1000-acre men like me.

To handle forthcoming changes, Mr Smith says his business must be able to react to change, which means mapping yields to identify less profitable areas, and potentially taking land out of production.

“This is very margin dependent, so I’m keeping flexible. I try to learn the lessons of the past by looking at the last decade, not just the last year.

“Wheat at £200/ tonne will see hillsides being ploughed, while at £100/ tonne land being cropped now will revert to grass.”

Mr King says another area where growers need to be flexible in coming years is cropping rotations.

“If we lose more active ingredients it could become too risky for some people to grow certain crops, something we’re already seeing with oilseed rape.

“The wet winter last year was the final nail in the coffin for many growers, and they’re switching rotations to make them more robust.”

Andersons has reflected this change in its Loam Farm model, which removed oilseed rape from its 2021 rotation after figures for 2019/20 budgeted for an overall loss for the 600ha model farm of £27/ ha. This was due to significant oilseed rape crop losses, and a revision of expected yields due to the wet autumn and winter.

“It’s human nature to carry on with what we are comfortable with until someone forces us to do something different, but the next few years will see more people throw out their production model to become more flexible,” Mr King adds. “It requires a different mindset.”

“We could also see more people deciding to take advantage of the government’s BPS lump sum to enable them to retire, as this drive for change might be the convenient excuse they need to withdraw from the industry gracefully.”

While the best businesses will find a way to survive the coming decade, Mr King says some operations will be forced to make difficult decisions.

“Not all businesses operating now will be operating in five or 10 years’ time, but that’s always been the case. The policy which arises out of the new Agriculture Bill might accelerate things, but within that process opportunities will be created.”