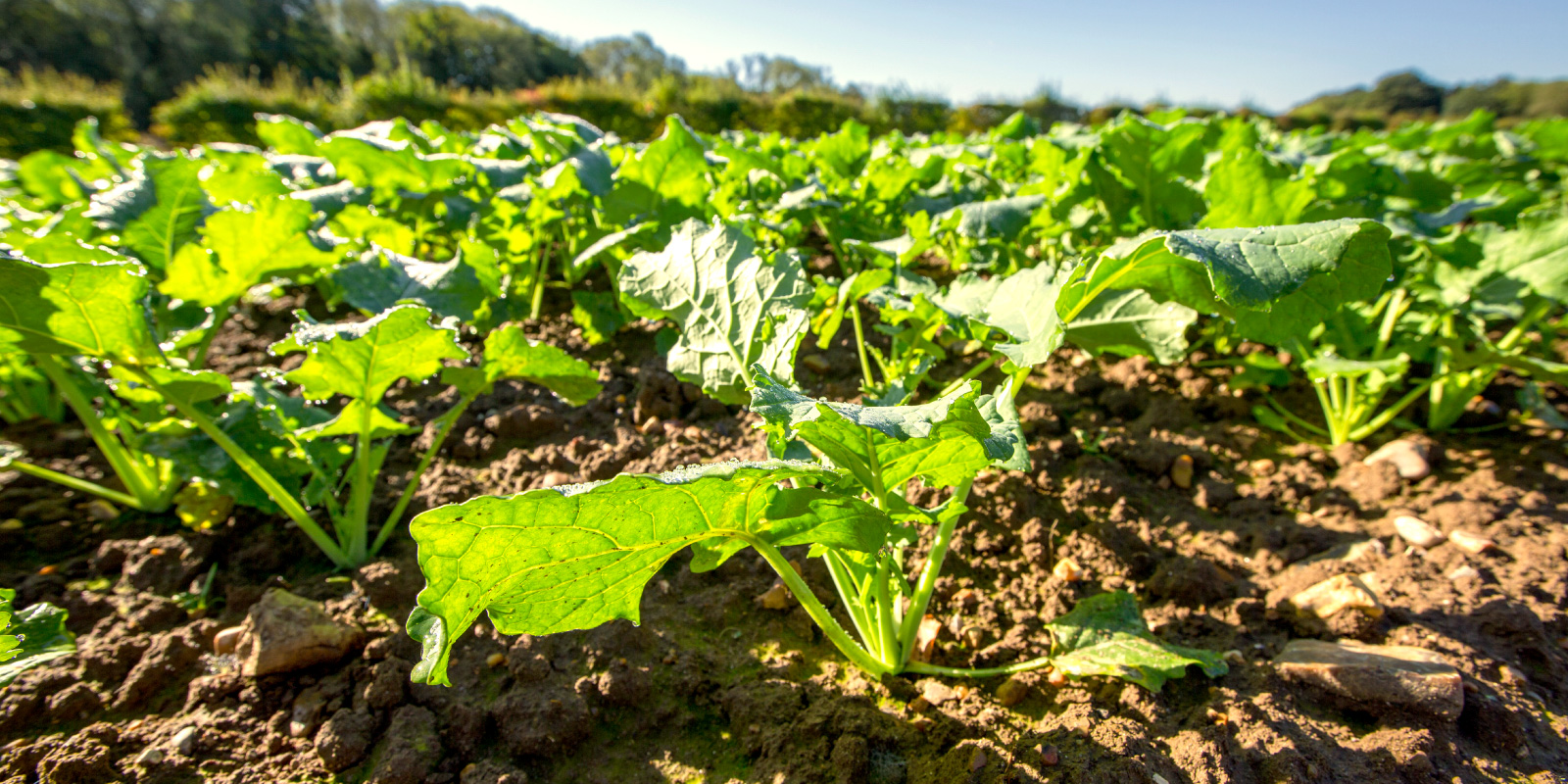 While OSR varieties resistant to cabbage stem flea beetle may be a way off yet, genetics have a valuable role to play alongside other cultural controls in tackling a problem that threatens the future of the crop for many, according to the latest studies.

The most reliable independent data on farm performance show the fastest-developing oilseed rape hybrids are coping better with cabbage stem flea beetle than other hybrid or conventional varieties.

This is supported by extensive commercial variety trials demonstrating a clear correlation between the level of larval damage and both the speed of autumn development and earliness of spring growth.

What’s more, as well as paving the way for breeding oilseed rape more resistant to adult feeding and less supportive of larval development, intensive work at the country’s leading genetic research institute has highlighted differences between existing varieties that could be exploited to more immediate effect.

“Since the loss of neonicotinoid seed treatments, CSFB has become an enterprise-threatening problem,” says James Howat, Bayer commercial technical manager in north England. “Made worse by increasing resistance to the remaining chemistry, it is spreading across the country with few signs of rapid resolution.

It’s important to remember, though, that it wasn’t so very long ago that many wheat growers were close to despair over the challenge of black-grass. Yet, the progress made in understanding how to manage this weed in a thoroughly integrated way means it no longer threatens the future of wheat-growing in some parts of the country quite as much as it once did.

“Just like black-grass, dealing with flea beetle will require a combination of varietal, rotational, agronomic and other strategies based firmly on understanding the pest. Encouragingly, we already have plenty of indications of how best we can do this and so maintain OSR’s undoubted value in combinable crop rotations.”

Vital intelligence on the role of current genetics in this respect comes from the industry-leading, 400-plus Kleffmann Group WOSR AMIS® farmer panel, carefully selected to be representative of British growers.

Based on the performance of more than 700 oilseed rape crops of 84 different varieties in 2018/19, the latest panel research shows two-thirds of harvested crops suffered notable pest damage. It also reveals the majority (59%) recovered reasonably or very well, delivering gross outputs 0.76t/ha higher than the 10% that recovered poorly.

Hybrids were found to recover noticeably better than conventional varieties to give an average 0.17t/ha gross output advantage at harvest, with the fastest-developing, most-robust Dekalb ‘Ex’ hybrids recovering best of all (Figure 1) to deliver the highest average gross output at 3.98 t/ha.

Figure 1: Where you suffered pest damage last year, how did your crops recover from it
on a scale of 1-9? (where 1 = very poorly and 9 = very well)

“The Kleffmann research found little or no differences in performance between the various establishment systems employed,” reports Edward Hagues, Bayer marketing manager for Dekalb OSR varieties. “However, hybrid recovery rates were consistently better than those of conventional varieties across plough-based, subsoiler seeding and direct drilling regimes.

“Hybrids also recovered from damage markedly better than conventionally-bred varieties across all sowing dates – from the first half of August to September.

“Not surprisingly then, growers were noticeably more satisfied with their hybrid crops than conventionally-bred ones last season, with Dekalb ‘Ex’ hybrids rated the most highly – 79% of crops scoring 7 or more on a 1-9 satisfaction.”

Despite higher levels of soil moisture at drilling, the research identifies nearly 60% of this season’s crops suffering a substantial or intense challenge from cabbage stem flea beetle at establishment.
Underlining their apparent advantage in tolerating adult grazing, the level of challenge suffered by DK ‘Ex’ hybrids (at 53% substantial or intense) in particular, was noticeably less than the 61% suffered by pure-lines.

“Despite the scale of this season’s CSFB challenge, almost half the crops surveyed were rated as establishing well and less than a quarter poorly,” notes Mr Hagues. “Again, hybrids were found to have established better than pure lines under most establishment regimes and at all sowing dates.”

The superior ability of fast-developing hybrids to tolerate flea beetle attack at establishment has been evident in extensive Agrii variety trials for several years now. The research-led agronomy company’s latest studies have, however, shown the varieties that develop more rapidly in the autumn and earlier in the spring suffer substantially less damage from larvae as well as adults.

“Across 40-plus varieties on four sites significantly affected by flea beetle last season, we also saw a very good correlation between the speed of autumn development and the level of larval damage. Interestingly too, we found the earliest varieties to grow away in the spring suffered the least stunting and main stem loss from flea beetle larvae – presumably due to their superior ability to compensate (Figure 2).

“Overall, varieties like DK Exsteel and DK Expedient stand out in both these respects,” he notes.  “We also see faster-developing Clearfield varieties like DK Impressario CL having a clear establishment edge for their tolerance to ALS inhibitor residues when grown in reduced tillage systems.”

Under these circumstances, it isn’t surprising the latest Kleffmann results show vigorous establishment, rapid autumn development and early spring regrowth as the three most important agronomic traits being sought by growers in their varieties these days.

Average scores of over 7.0 on the 1-9 scale of importance in each case put them ahead of the traditionally sought-after traits of lodging, light leaf spot and phoma resistance, not to mention increasingly desired pod shatter resistance (Figure 3).

Figure 3: What importance do you place on the following agronomic traits on a scale
of 1-9 (where 1= no value and 9=great value) 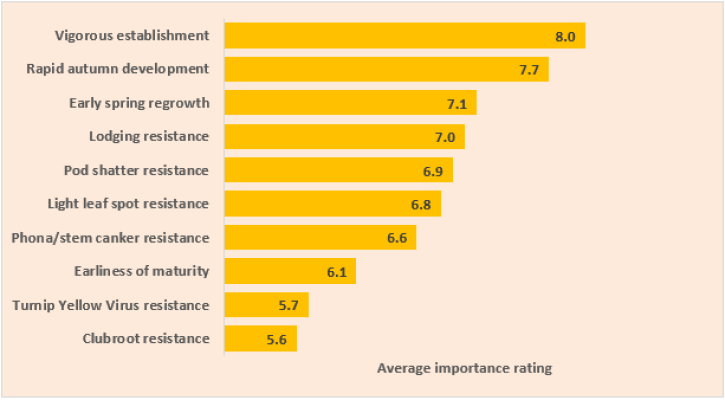 As well as showing considerable promise for future breeding, intensive genetic research at the John Innes Centre just outside Norwich has identified marked differences between OSR lines in both their attractiveness to adult flea beetle grazing and their ability to support larval development that could have more immediate value for UK growers.

“Our assessment of scanned leaf images shows the average degree of damage varying highly significantly from 2% to 20% across these lines where the beetles had no choice,” he reports.

“Regardless of adult grazing levels, we are also finding marked differences between the success of larval development across the same OSR lines,” he continues. “We measure this by placing a set number of eggs in the soil at the base of each plant isolated in its own chamber and maintained under precisely the same environmental conditions.

“Following the whole life cycle through, we’ve recorded a four-fold difference in the number of adults actually emerging among the lines tested. This indicates valuable variations in their ability to tolerate the larvae as well as their attractiveness to adults.

“Because the OREGIN lines have all been subject to high density DNA mapping, ordering a total of 225,000 markers, we are able to correlate the traits we see in both respects with specific areas of the OSR genome to provide a valuable resource for plant breeding.” 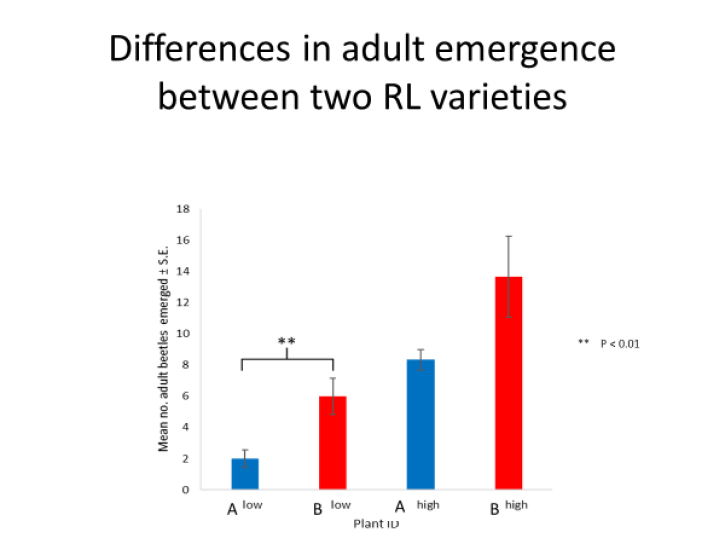 “With a determined industry-funded effort we could screen all current and emerging varieties as well as breeder’s lines and hybrid parents for tolerance to both adult feeding and larval success,” suggests team member, Dr Rachel Wells. “This would give growers a valuable head-start as far as genetic solutions are concerned.

“As well as genetics, our work with many generations of the pest over the past five years has given us a much better understanding of what makes cabbage stem flea beetle tick. It wouldn’t take much additional effort for us to develop a good initial model of flea beetle population dynamics based on key environmental variables. Continually refined with field experience, this could form a crucial resource in both predicting levels of local risk and testing management strategies.”

From establishment to harvest we can provide insight about crop management and protection to help maximise yields.

Together, our Dekalb genetics and the Bayer 2020 Establishment Scheme provide you with additional OSR growing support. Register here.