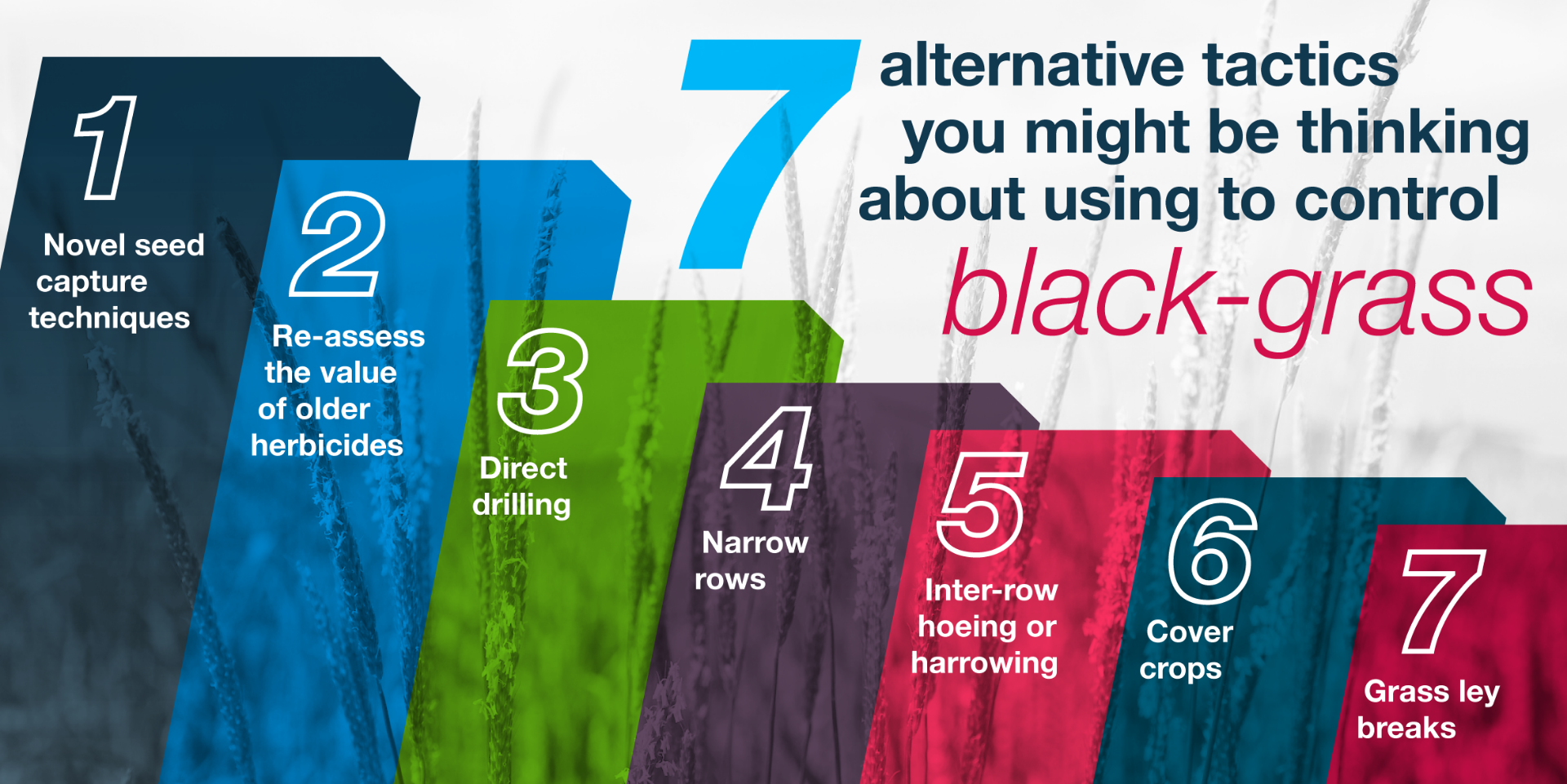 So here are the top 7 that growers were considering using, together with some thoughts about why they might help, and potential challenges to be aware of.

Harvest weed seed control is seen as the Holy Grail in Australia, where a number of techniques are being used to help minimise seed return primarily of rye-grass. Among these are adaptations to combines, such as the Integrated Harrington Seed Destructor or Seed Terminator, which pulverise 95% of weeds seeds in the chaff fraction.

Another option gaining popularity in Australia is separating the chaff, including weed seeds and dealing with it in various ways. Cheapest is just diverting the chaff into a single line behind the combine (chaff lining), while a more expensive modification puts the chaff into tramlines (chaff deck). The chaff is then left to rot / mulch. In trials, the more chaff diverted the lower weed emergence in the following crop.

Could these options help with black-grass?

The biggest is that black-grass, unlike rye-grass, tends to shed its seed before harvest, so will these techniques have the same impact in our conditions? But there’s no doubt that the concept of reducing weed seed return is a good one. Already chaff decks are being trialled in the UK with some positive results, so perhaps adaptations can be made to improve the success, or other options investigated to overcome the issue of early seed shed.

With the discovery of resistance to flufenacet in a small number of populations of rye-grass, this option could also be of interest to growers in this country with rye-grass control problems..

2) Re-assess the value of older herbicides

Older herbicides, which were discarded in favour of products such as Atlantis (mesosulfuron + iodosulfuron) when they were highly effective, still have a place in programmes for black-grass control. Chief among these is perhaps Avadex (tri-allate), which  has seen a comeback in recent seasons as part of the residual pre-emergence programme.

Control levels might not be on a par with Atlantis in its heyday, but with every percent counting in the battle against black-grass and reducing seed return, some of these older products are worth considering.

Just as with Atlantis, resistance has affected many of the older herbicides, such as the fops and dims. Once resistance is in the population, it remains there over time, so the effectiveness of some older products might not be that useful.

There’s also the law of diminishing returns. Stacking herbicides is definitely a worthwhile tactic, but ultimately the cost-effectiveness of such a technique needs to be assessed. At some point the cost will outweigh the benefit of adding further products to the mix, along with a much increased risk of crop damage in some cases.

Already quite widely used, moving to lower disturbance establishment can work very effectively, particularly where you know the population you’re dealing with. Following up good control in the previous crop, for example, with a direct drilled crop means you won’t be bringing up more seed from the seedbank, while any seeds left on the surface can be predated or degraded by fungal infections.

If you don’t control black-grass well in shallow non-inversion tillage systems it can proliferate more rapidly (around 10-fold) than in plough-based systems.

Deciding when to start using direct drilling is important. If you’ve had a disaster in the previous crop, direct drilling the next crop might not be sensible as you’re likely leaving a lot of work to the herbicides. It makes most sense to start or continue direct drilling after seasons where control has been good.

However, not all soils are suited to continuous direct drilling due to structural issues. In these cases, direct drilling should be considered just a part of an overall system, possibly incorporating the use of cover crops to help maintain suitable soil structure. Despite the potential benefits from a minimum disturbance approach don’t discard the plough as ploughing is a useful “reset” button should there be a failure in control. But remember not to bring buried seed back up again, ideally for at least 4-5 years to allow time for it to degrade naturally.

Narrow row spacing is just one of the tactics in cereal crops that can be used to maximise crop competition to suppress weed growth. Trials suggest around 20% fewer weed heads / plant in wheat sown at 6cm row spacings compared with a 12cm spacing.

For some it may not be practical to set the drill up to do narrow row spacings In addition narrow rows means greater soil disturbance at drilling, which may not be desirable for both moisture retention or stimulation of emergence of weeds.

Experience of very narrow row spacing in Australia has shown that it is not viable in high yielding areas, where the resulting crop residue can be difficult to manage during the subsequent seeding operation. Such studies have however shown that “every centimetre counts” and so even small reductions in row width can show a benefit.

Clearly, if using inter-row cultivations to help weed management, narrowing of rows may make such operations more challenging to achieve without increasing the risk of crop damage.

Inter-row hoeing is already used quite widely in some crops, such as sugar beet, but for cereal crops with much narrower row widths it hasn’t been particularly practical. But with the development of strip till systems using band sowing at 300mm widths and leaving an unseeded strip of 140-150mm between rows, using an inter-row hoe might be feasible.

Mechanical hoeing can potentially drastically reduce the number of surviving plants and so reduce the amount of weed seed being returned to the soil. A mechanical approach also helps reduce the risk of development of herbicide-resistant plants as no annual weeds have yet been able to develop resistance to steel.

Soil conditions and plant development have to be right for the hoe to work effectively and not damage the crop. Essentially in moist soil conditions uprooted plats may re-root and survive. Hoeing is also potentially more labour-intensive and relatively slow – Claydon suggests an operator might be able to cover 40ha a day with a 6m hoe.

The hoe also only takes out weeds between strips, and not those that come up within the plant rows, so the technique will likely need to be used in conjunction with herbicides to maximise effectiveness.

Again, cover cropping is a tactic that more growers have turned to, while equal numbers are looking at following suit. But it is important to understand what you are trying to achieve with the cover crop. Most experts are now suggesting cover crops should not look to suppress black-grass germination as the “cover crop” name suggests..

Relatively thin cover crops, potentially also containing deep-rooted species, allow black-grass to emerge before destruction of both the cover crop and the black-grass. In this situation the cover crops main role is to help re-structure the soil. That’s particularly helpful, when, as most cover crops are, it’s followed by a spring crop.

Agrovista’s Project Lamport, sponsored by Bayer, has proved over a number of years that this approach can be successful, even on heavy soils where spring crops have been traditionally avoided.

A lot is still being learned about how to make cover crops work most effectively, but one key seems to be around making sure seed rates are not too high so the cover crop out-competes the black-grass leaving it to come up in the following spring crop. It is also important to make sure the subsequent spring crop is drilled with minimal soil disturbance to avoid black-grass germination.

Timing when to destroy the cover crop is another area where best practice is being investigated. Go too early and you might not maximise black-grass control, go too late and nutrients are locked up decomposing the cover crop and hinder establishment of the spring crop.

It’s also a practice that needs practice to get right. It’s noticeable in the survey that 9% have tried this and decided to not continue. To get the best from a cover crop good management is definitely required and that might not happen first time round. In particular, for a cover crop to play its role in black-grass management, it needs to be established as a successful crop. This can be a challenge in itself given the range of species and the small seeded nature of some cover crop constituents.

Taking land with black-grass problems out of arable production can be very effective, but it needs to be at least two years and ideally 3 or 4 years to reduce high infestations to acceptable levels. Also there needs to be a local market or need for grass.

Managed correctly there is around an 80% decline in the weed population year-on-year meaning after two to three years populations will have greatly reduced.

The key is to success is to make sure grass weed seed isn’t shed, so silage cuts need to be timed to avoid this. Get it wrong and the benefits of having a grass ley will be much reduced. But that might mean compromising on silage yield.

Cultivations after the grass ley are also important – allowing enough time to elapse between destruction and the following crop can both help allow further germination of black-grass to be sprayed off, and minimise the risk of frit fly damage in the following crop for example.

Over the past few seasons a huge amount of added emphasis has been given to using cultural controls as the starting point for black-grass control strategies.