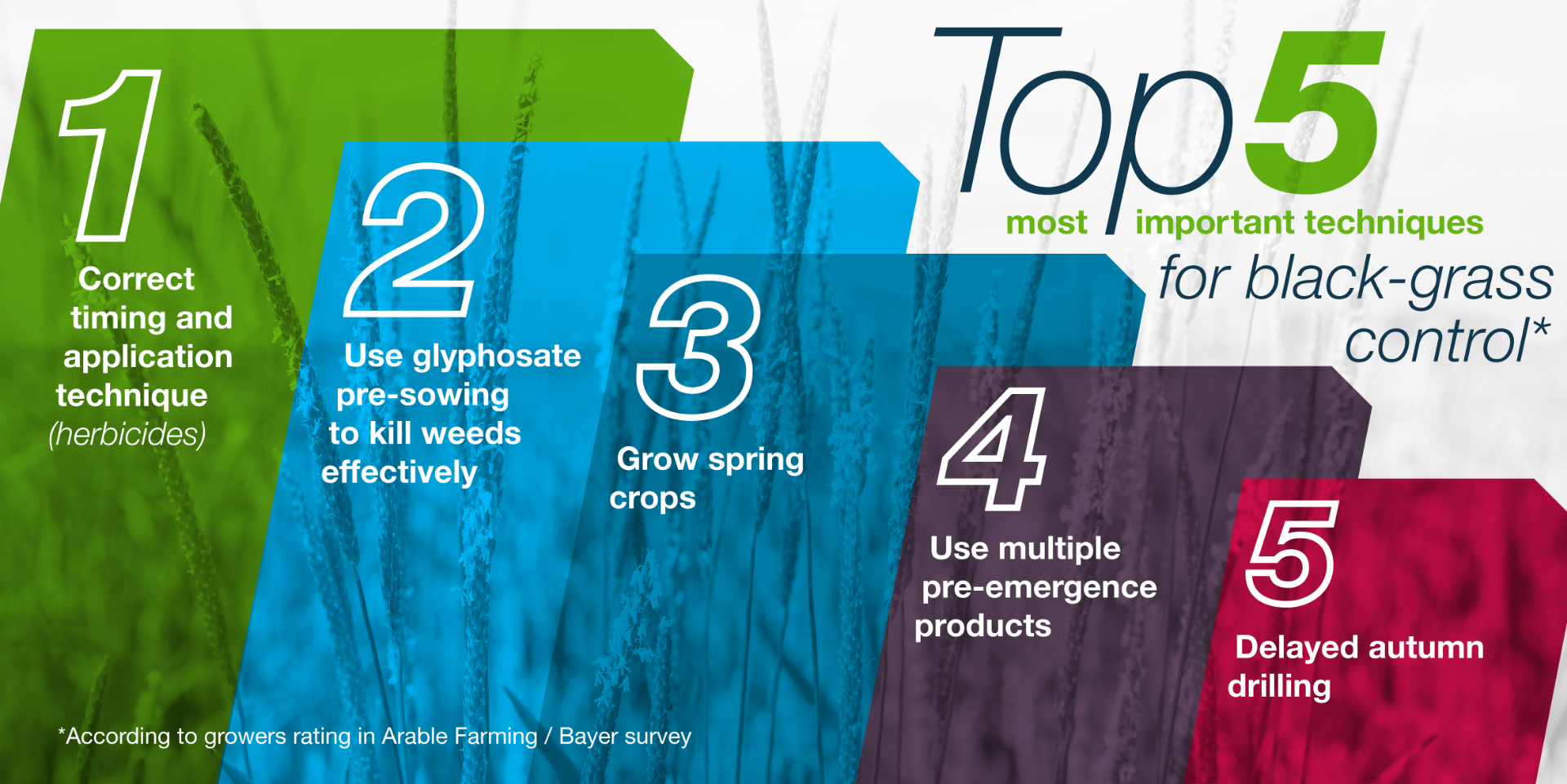 So it was somewhat surprising to find that three of the five most important techniques for growers in an Arable Farming / Bayer black-grass control strategy are related to the use of herbicides. Does that point to still an over-reliance on the chemical can for controlling black-grass?

The survey used Stephen Moss’s 5x5 black-grass control framework to assess which techniques farmers are using within their control programmes, which they have used and discarded, and which they might use in the future.

In total 33 different techniques were assessed, split across 5 different categories – cultivation, sowing date, stopping seeding, competition and herbicides. For each, a follow up question asked growers to rate out of 10 how important it was to the overall black-grass control programme.

So is this an indication that growers are still thinking chemical first, or an acceptance that herbicides are an integral part of any successful control programme? It’s obviously difficult to answer that just from the data obtained from this survey, but adoption rates would suggest that cultural controls are widely used, although the chemical options were obviously still very popular too (see Box 2).

As a chemical manufacturer, we would be lying if we said it wasn’t good to see positive acceptance of the role of our products, and there is no doubt all three techniques in the top 5 relating to herbicides are important parts of many successful programmes. It is doubly good to see an understanding that making sure products are applied at the best timing and using the right application techniques is vital. That the use of glyphosate is also high on grower’s lists is not surprising in the slightest.

So what else could be on the list? How about hand-roguing or improving drainage? Both have been proven to help reduce black-grass populations, but equally neither is necessarily practical for every farm.

One that should be doable on every farm is actively avoiding seeding by cleaning down machinery before entering a field – a good proportion of respondents were doing this, but is it making a bigger contribution to overall control than the use of glyphosate or a pre-emergence herbicide? Possibly not. And there’s the rub: for most growers it is the combination of cultural controls and judicious herbicide use that will likely bring success against that most pernicious of weeds, not one or the other. So as long as you’re not only reaching for the can, it is probably OK to recognise just how much herbicides are a vital part of your black-grass control strategy.

4 tips to working smarter this season

Seamless connectivity, technology and automation have all allowed us to work smarter by improving decision making and farming practice.