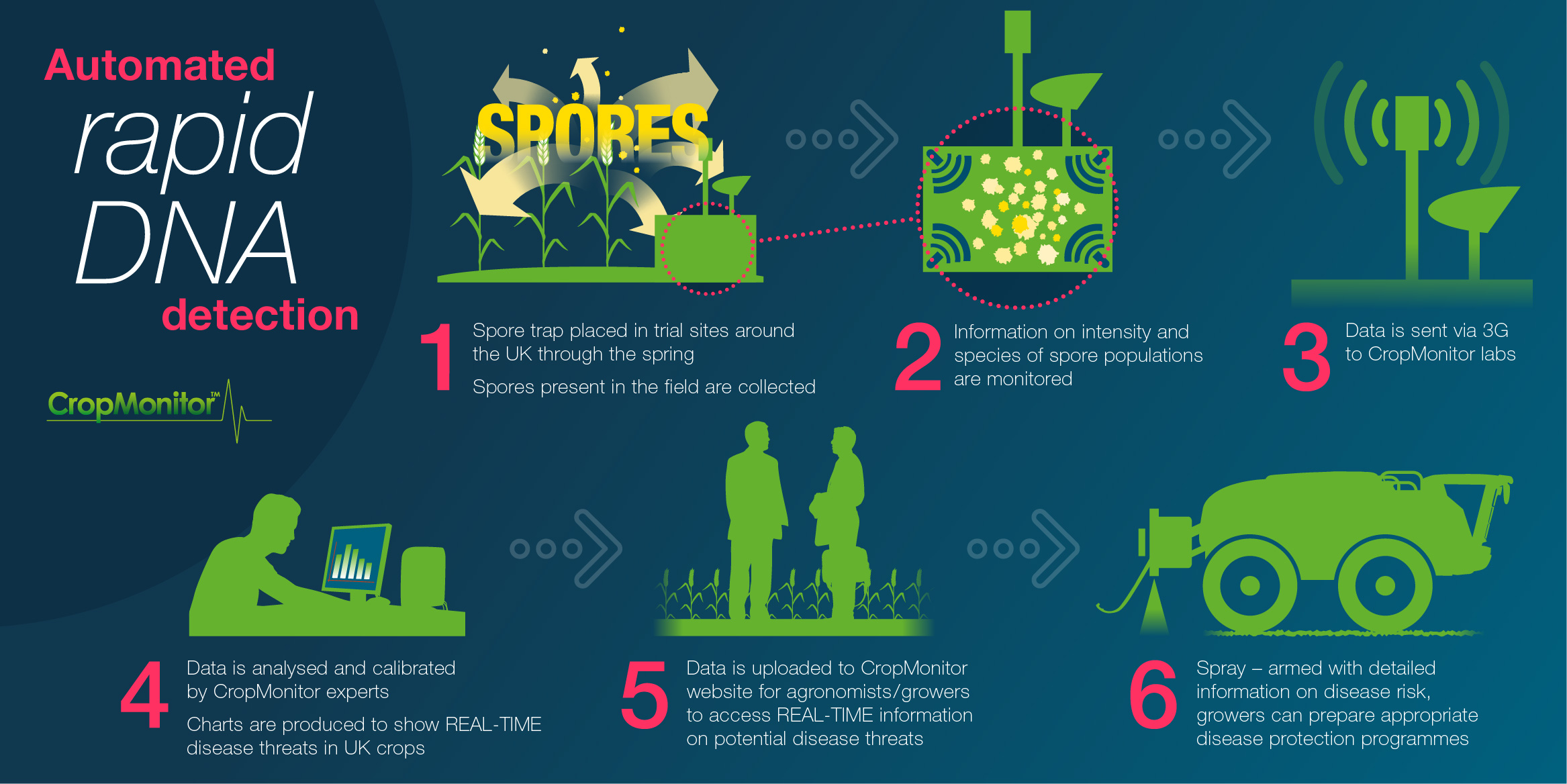 A ground-breaking research project has produced an automated fungal spore trap that will help growers make better use of fungicides across different crops.

The Innovate UK-funded venture began in 2014 with the aim of producing a robotic in-field device to trap and identify air-borne fungal spores of Septoria, yellow rust and brown rust in wheat

Led by researchers at the University of Hertfordshire and FERA, in conjunction with Bayer and remote sensing experts OptiSense, the initial research project finished earlier this year.

The result of the project is an automated fungal spore trap called Spore Sentry, which will be commercially available from 2019. The trap is placed within a cropped area and works by sucking in air at 100 litres/min, far more than traditional spore traps.

At the end of capture, a liquid reagent is automatically mixed with spores to release DNA, which is analysed using Loop mediated isothermal amplification (LAMP). Results are produced after about 30 minutes and sent wirelessly to a central database daily.

Spore Sentry can take air samples and conduct tests unattended for up to eight pathogens per day over seven days before the LAMP consumables need replenishing.

“We can now accurately predict when yellow and brown rust infection will occur and with the Spore Sentry’s wireless technology, we will gather information much quicker than before.” 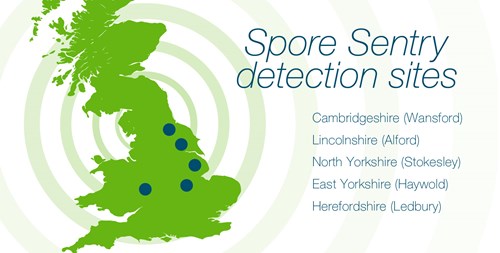 However, Septoria infection risk is more difficult to predict, as it is present throughout the growing season and spreads by wind-blown ascospores and rain-splashed pycnidiospores.

Rather than Spore Sentry directly influencing Septoria fungicide spray timing like rusts, it will be used to gauge inoculum “loading” and track disease development through the season and indicate risk at key GS32 and GS39 fungicide timings.

Bayer’s William Charlton says this builds on existing disease modelling and when complemented with agronomist and grower intuition, will improve the accuracy and efficacy of fungicide treatments.

“There is also potential for the spore trap to detect fungicide-resistant mutants in future, helping tailor product choice more effectively.

“Data will build year-on-year and improve the system’s accuracy.”

With a single Spore Sentry unit retailing at about £20,000 and running costs likely to be hundreds of pounds each season, generally only larger farms or agronomy groups may buy their own.

However, a network of devices providing a subscription-only service will provide a wider and more cost-effective option for the average farm.

This is happening at FERA, with a new and more robust decision support platform on its CropMonitor website, the result of Innovate-UK investment, as part of the Crop Health and Protection Centre.

Current CropMonitor weather-based risk models can identify conditions for infection, but don’t account for the presence or absence of fungal spores.

FERA’s Judith Turner says traditional spore trapping methods involve laboratory testing, which has been too time consuming and expensive to incorporate into the service.

However, the automation and comparatively low cost of Spore Sentry means spores can be detected in real-time and improve prediction accuracy.

The new platform goes live this year and in time will incorporate other diseases, including light leaf spot, Rhynchosporium and potato late blight.

Which wheat flag leaf fungicide has performed the best: See the results from 3 years of farm trials

How can you improve disease management, particularly Septoria this spring? We asked six experts for their top tips.