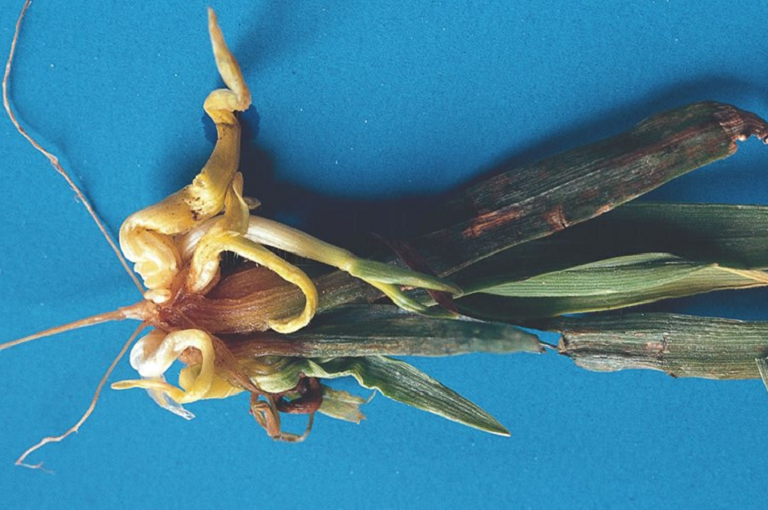 Stem nematodes are unsegmented worms that spend most of their time in the plant and a small amount of time in the soil. The adults are just over 1 mm in length, colourless and are not easily seen without magnification.

Stem nematodes are a very destructive pest of bulb onions. They feed within the plants on the stems, leaves and bulbs by injecting enzymes into the cells via their stylets. As the contents are extracted the cells collapse and die. Plants atttacked display symptoms of twisted and distorted leaves and a swollen base. Below ground roots are destroyed and where pest pressure is high plants can be lost. Early attacks can lead to loss of seedlings. Later attacks can be symptomless but result in bulbs rotting in store as a result of secondary infections by bacteria and fungi.

the nematodes live as parasites within the host plant tissue where they breed continuously. It has been estimated that in their lifetime females can lay up to 500 eggs. In wet soil conditions they can move over short distances (a few centimeters) to attack nearby plants. Under dry conditions they can become dormant until rain triggers a return to activity. In wet soils and in the absence of host plants they can survive for a year or longer and in clay soils persistence can be further extended. Other plants which are suitable hosts include common weeds such as bindweed, cleavers, chickweed, knotgrass, mayweed and speedwell. In the presence of host weeds stem nematodes can persist for many years.

Damage caused by stem nematodes starts as patches within fields which over the years increase in size in the direction of cultivation. They can also be re-distributed by flood water. Stem nematodes can also affect carrots and parsnips. Economic loss to both yield and quality can be severe.

As stem nematodes spend a lot of time in the plant it can be difficult to detect in soil. Soil sampling will identify fields of high risk attack if stem nematodes are found, but it will not prove if the pest is absent from a field and cannot guarantee that there will be no crop damage. The results of soil sampling can help growers to select fields with low/zero nematode counts or alternatively they can be used to make a decision on the need for nematicide treatment.