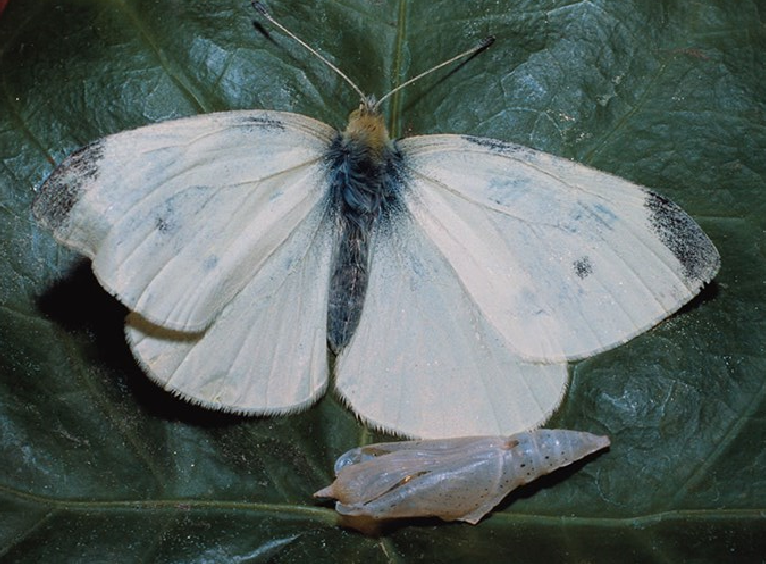 The small white butterfly can be identified by its size, a wingspan of 3-4.5 cm, and the male which has 1 small spot in the centre compared to 2 small spots on the forewing of the female. They also have a light yellowish colouration on the underside of the wings. The caterpillar is a light green colour, with thin feint yellow stripes along the length of the body, and is up to 3.5 cm in length.

With the exception of eggs being laid singly on the underside of brassica leaves, such as Brussels sprouts, cabbage, horseradish, kale, broccoli (and even wild relatives such as charlock and hedge mustard), the life-cycle of the small white is very similar to that of the large white. Again there are 2 main flight periods which are April/May and July/August and like the large white the UK population will be supplemented by new summer arrivals from the Continent

The damage caused by this pest (per plant) is not as severe as that caused by the large white on account of the eggs being laid singly, rather than in larger clusters, which leads to more individual grazing compared to the collective feeding as happens more commonly with the large white. The caterpillars of the small white are more palatable to predators than those of the large white and thus they depend more on camouflage and concealment for survival. Potentially small whites are a more important crop pest than large whites.

Small whites are an important pest of brassica crops and should be controlled when numbers first start to establish.