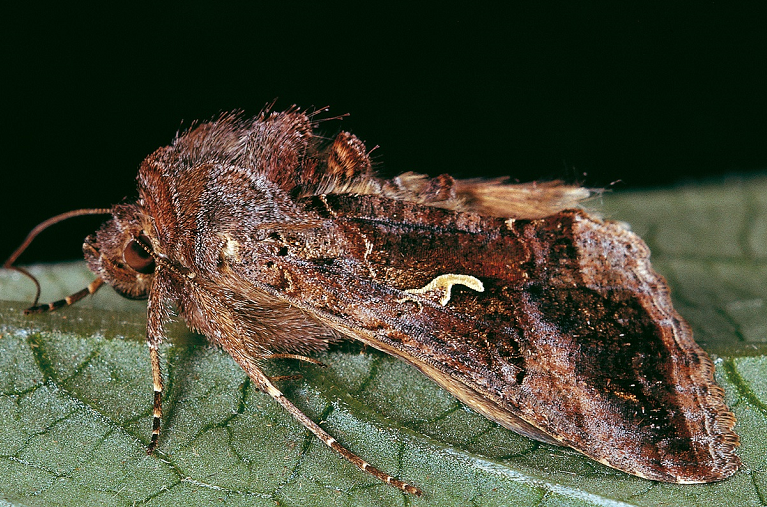 The adult moths are greyish/brown with a distinctive silver coloured 'Y' mark easily visible in the centre of both of the 'roof' shaped forewings. The hind wings are lighter in colour with a dark border giving a total wingspan of 30-40mm. The moths are active during the day feeding on nectar and can fly very rapidly. The caterpillars are 30 mm long, bright green with a white longitudinal stripe. Unusually the caterpillars have 3 pairs of prolegs (compared to the more normal number of 5) and consequently move with a distinct looping gait.

As the caterpillars mature they become increasingly more voracious and eat through the leaves whilst leaving the veins intact giving a stripped skeletal appearance to the plants.

Silver 'Y' moth are indigenous to southern Europe, north Africa and Asia. In the spring the adults migrate as far afield as northern Europe and in the UK the moths can be found from May onwards. Small round eggs are laid singly or in small groups on the undersides of host plant leaves. Caterpillars emerge 1-2 weeks later and feed for up to 4 weeks and when fully mature pupate in silken cocoons, green coloured darkening to black, attached to the undersides of the leaves. The adults emerge 10-14 days later and live for up to three weeks. There can be 2 or 3 generations per year until early autumn when they are unable to survive the onset of frosts.

The caterpillars are polyphagous and can feed on many cultivated crops including vining peas, cabbages, sugar beet, potatoes, tomatoes and lettuces. It has been estimated that the number of host plants for the silver 'Y' moth caterpillar is in excess of 200 species. Economic damage can occur when large numbers of moths invade cultivated crops, especially late in the season when third generation numbers peak in hot dry weather (such as in 2010 when damage was widespread). This pest tends to be more abundant in the eastern counties and the south of England.

If numbers reach epidemic proportions control measures should be considered. Pyrethoid insecticides will give control of silver 'Y' moth.