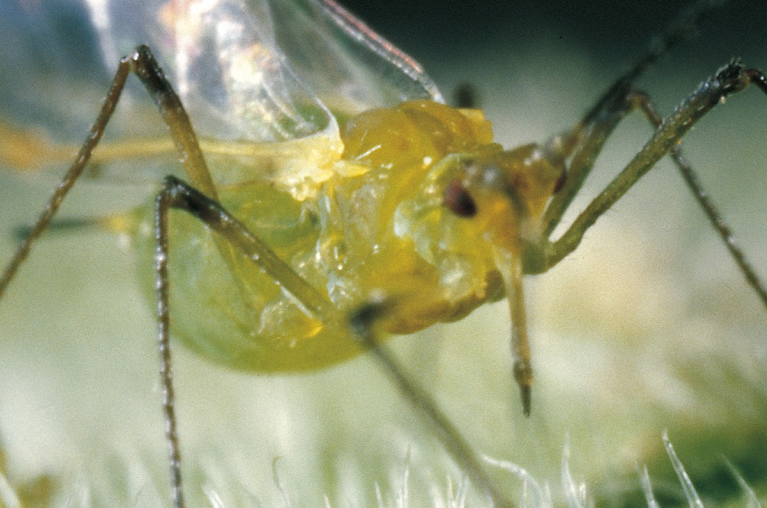 1.7-3.6 mm long and ranging from light green, yellowish green to pinkish red. Often has a darker subcutaneous stripe down the centre of its back especially in immature nymphs.

Early large infestations may cause the upper leaves to roll upwards and it has been estimated that it can transmit a range of over 50 plant viruses including potato leaf roll virus.

Can overwinter on Rosa species as eggs but more usually spends winter in the mobile stages on weeds, potato plants or lettuce plants under glass. In early summer the winged forms migrate onto potato and other crops. It can feed on over 200 plant species in more than 20 plant families. The Solanaceae are its preferred summer hosts. A second summer dispersal migration may occur in July if numbers are particularly high.

This species has tended to be more prevalent than others on potatoes in recent years and is an important pest of potatoes. Yield loss as a result of physical damage can occur where populations are high and losses due to virus transmission can cause substantial economic damage. High numbers can cause 'false leaf roll' in susceptible varieties. For this aphid species there is no known insecticide resistance.

The threshold should also take into account the presence of peach-potato aphids. In seed potatoes - A zero tolerance strategy. Ware crops - Recent research suggests treatment is needed during mid-late June if numbers are increasing rapidly.