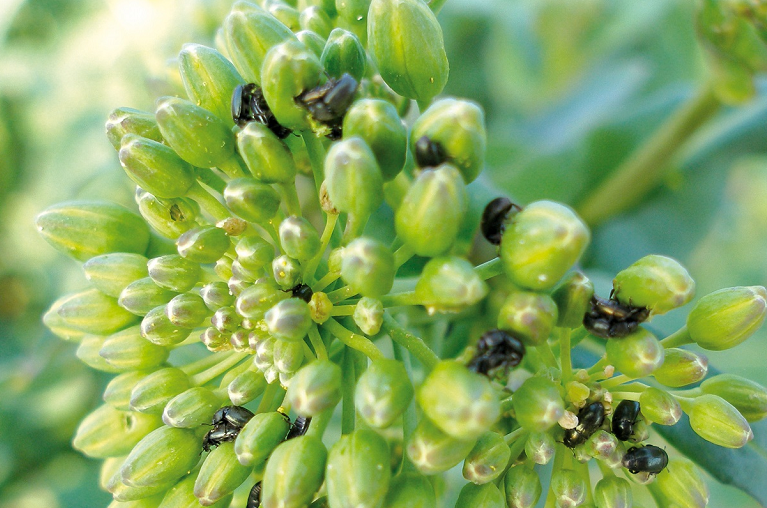 The adult beetles are up to 2.5 mm long, metallic greenish to blue/black. The larvae are creamy white, 3-4 mm long, with a brown/black head and 3 pairs of short brown legs. The uppersides of the body of the larvae are lightly coloured with dark brown spots and short bristles.

Both the adults and larvae feed on the developing buds and flowers in search of pollen. Holes can be found in developing buds where the beetles have eaten through the sepals to reach the stamens. This can lead to bud abortion and reduced pod-set.

Adults emerge during late March through to May. Initial feeding begins close to the overwintering sites and migration into crops occurs on warm days, they fly well when temperatures reach at least 15 C. Populations are commonly more numerous on the headlands of oilseed rape crops and movement into the main body of the crop will occur with favourable weather conditions. Eggs are laid in flower buds and these hatch after 7-10 days. When fully developed the larvae pupate in the soil and the adults emerge in mid-summer. Autumn flowering brassicas are frequently damaged by a second generation.

Pollen beetles are widely distributed throughout the UK and feed on the pollen of a wide variety of plants. Invasion into winter oilseed rape is often too late to cause serious damage and yield loss. Damage at green/yellow bud is more likely to be serious, particularly on backward crops, compared to later feeding on open flowers. In contrast, spring oilseed rape begins to flower when pollen beetle activity is peaking and is potentially more susceptible to attack. Accordingly, in conventionally bred spring varieties the threshold of beetles per plant is about one third of that for winter oilseed rape. In a recent HGCA project (RD – 2005 – 3242) it has been suggested that an individual beetle can destroy up to 9 buds or flowers. Calculating the number of excess flowers per m2 (those which do not produce pods), this work suggests that strongly growing crops could tolerate between 7 and 22 beetles per plant. Some resistance to pyrethroid insecticides has recently been found in the UK, particularly in southern and eastern areas, and severe resistance to pyrethroid insecticides is common on the Continent.