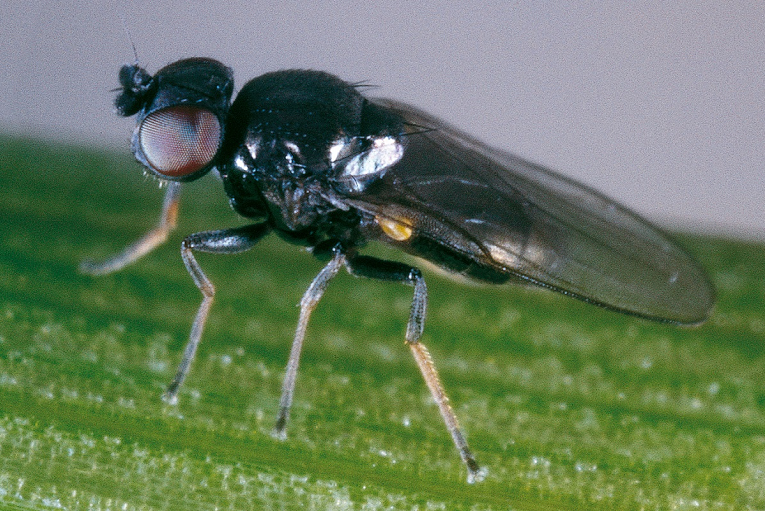 The adult flies are tiny, 2-3mm long, and black in colour. The maggots are white, pointed at the head end and rounded at the rear end, and 5-6mm long with no legs. On dissection both maggots and pupae can be readily found at the base of recently damaged tillers. The pupae mature to a dark shade of brown.

Tillers attacked by frit fly show the classic 'deadheart' symptoms of a yellow central leaf which can be easily pulled away from the surrounding green leaves. Frit fly maggots can move from tiller to tiller and attacks on very young plants can lead to plant loss. In severe attacks whole crops have had to be re-drilled where control measures have not been used.

In late summer eggs are laid on the underside of the leaf sheaths at the base of plant leaves and maggots rapidly hatch out to tunnel into the centre of the plant shoots to start feeding. This feeding activity on the developing tillers results in the characteristic 'deadheart' symptoms. Frit fly maggots can move from a grass crop which is cultivated and ploughed in the autumn, into a following crop of grass or winter cereals. The maggots are able to survive in the decaying plant debris and can migrate to feed on the newly sown crop. This generation of frit fly maggots feed on the host plants throughout the winter months until pupating within the plants from late February to March to produce a new generation of adults which emerge in May/June. These adults search for egg laying sites on spring sown crops of cereals, grass and maize. Second generation adults on the wing in late July have been known to attack the ears of crops such as oats. It is the third generation of adults emerging from pupae in late summer which presents a threat to autumn drilled crops. There can be up to 3 generations per year. Grass crops are an ideal habitat and reservoir for this species.

Establishing crops can be at risk if more than 10% of plants are attacked at the one to two leaf stage. Successful control can also be achieved by applying contact acting insecticides at the first signs of damage. Lengthening the interval between ploughing grass in the autumn, by a period of more than 6 weeks, before sowing a susceptible crop can help to prevent the maggots from moving from the decaying turf into the establishing crop. Some organisations offer a trapping service which monitors the emergence of flies from grassland. This gives an indication of 'in seasonal' frit fly activity and the potential risk of crop damage from this pest based on comparisons with previous seasons.