Although not a serious threat to early sown, vigorous crops downy mildew can be a problem for later sown or backward crops. 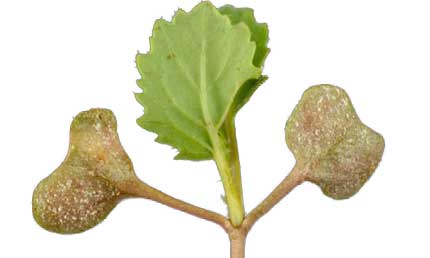 What is Downy Mildew?

Infection can be introduced by either airborne spores from volunteers and nearby brassicas or oospores produced by previous crops which are able to survive in the soil without a host.  Infection is favoured by temperatures between 10 and 15°C and humidity from rain or dew.  The spores germinate by producing germ-tubes that penetrate cell walls, often on the lower side of the leaves, and then the leaf tissue becomes colonised.

How to spot Downy Mildew

In infected plants the upper surfaces of affected leaves have ill defined, irregular, yellowed areas while the lower surfaces will have lesions which are covered in white to grey sporulating fungal growth.

Both cotyledons and the first true leaves can be killed by downy mildew if the lesions coalesce to affect most of their surface.

Downy mildew can occur on leaves throughout the year and often spreads through the canopy during stem extension and flowering.  It can also infect pods which will be covered in yellow or fawny brown lesions.  In humid conditions these are covered in white to grey sporulating growth.  If the infection is severe enough the whole pod will bronze and ripen prematurely.

How to control Downy Mildew

Early sown crops are able to grow through the vulnerable stages quickly and so are at less risk.  For later drilled crops, some fungicidal seed treatments can improve downy mildew control.  Foliar sprays are useful only as protectants and are often not required.