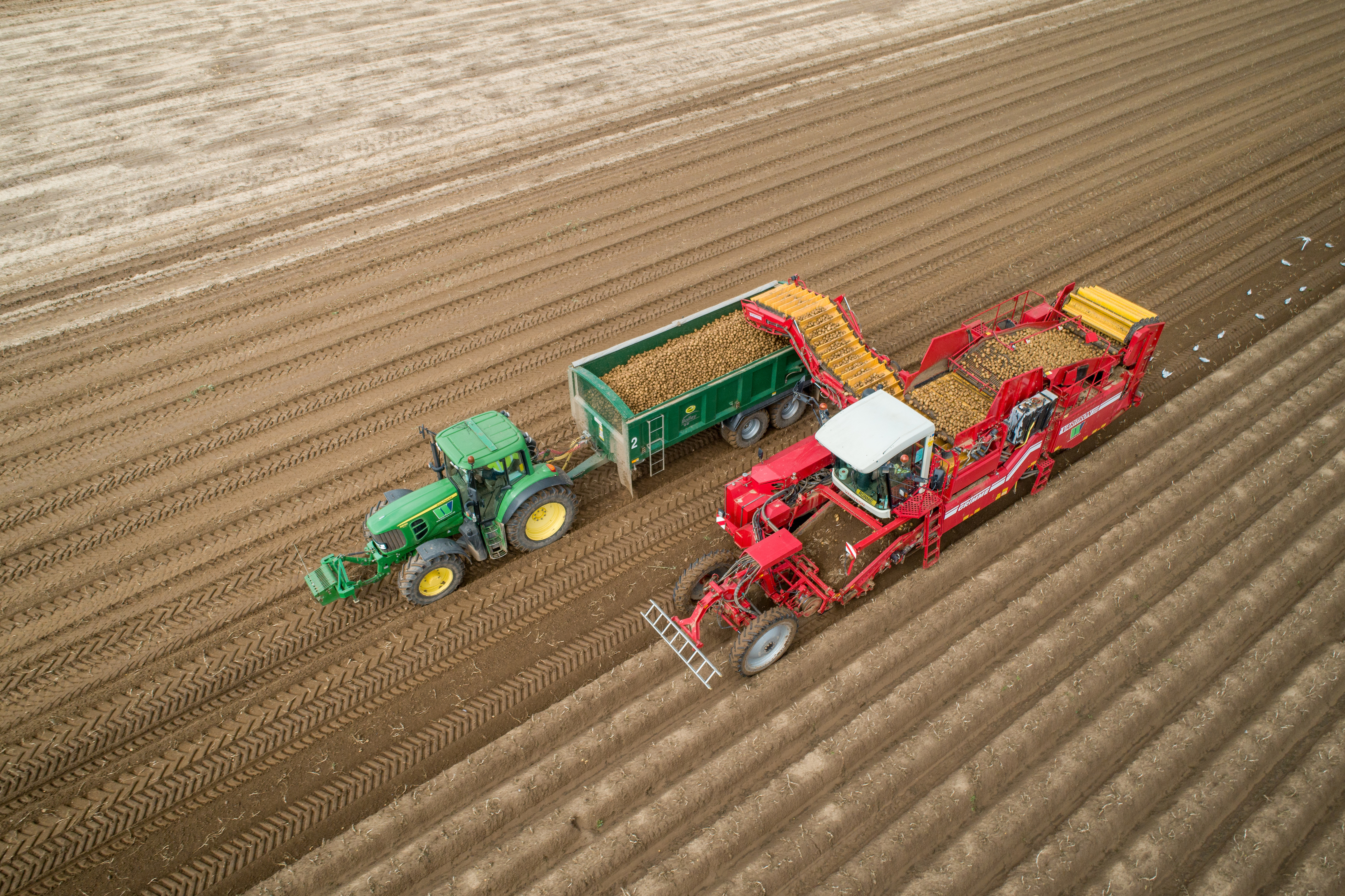 There is more to the long-term storage of potatoes than sprout suppressants. Here we examine five main considerations.

Good store hygiene does not need widespread use of disinfectants, in most situations basic physical cleaning will suffice.  Sweeping can disperse dust, but where floors are rough or cracked, vacuuming or power washing (with appropriate water disposal) are preferable.

“The focus should be on removing as much dust and dirt from stores and machinery as this is an excellent carrier of  bacterial and fungal spores. Growers will know from experience what diseases affect their crops so can use this knowledge to guide their actions and inform what level of cleaning is needed”, says Dr Stuart Wale, potato consultant and researcher at Scotland’s Rural College (SRUC).

“Disinfectant use on concrete floors has rarely proved effective.  However, a deep store clean involving disinfectant, such as a fumigation with peracetic acid or using an ozone generator, are worth considering occasionally,” he adds.

Good box stacking is the foundation of efficient air movement, and it is important to develop a system that supports optimum ventilation. This can be as simple as marking a layout on the floor to ensure minimal gaps between boxes and no obstructions to air flow.

Ensure boxes of the same height are used in each column. Stacks should be at the same height and ensure that there is enough room at the back of the store, about 1m, for the air to fall back down and pass back along pallet slots. Over-filling stores frequently restricts effective ventilation,” adds Dr Wale.

Poor air movement can lead to a loss of quality through uneven temperatures and condensation.  It also increases costs as more energy is consumed to attempt to keep temperatures uniform in those areas where air flow is poor, or boxes are poorly stacked.

“Ventilation is not just there to dry potatoes as they enter the store, but also to remove heat of respiration. When potatoes are moved, respiration rises and they give off heat; if this is not controlled it could lead to the build-up of temperature gradients and, ultimately, condensation,” says Dr Wale.

Air will always take the path of least resistance, so where boxes are poorly stacked the air will be able to exploit gaps to travel back to the ventilation unit without passing through or over the potatoes.

“Use of a plenum or an air divider curtain can help to prevent short-circuiting and make sure air is used to best effect in overhead-throw stores”, advises Adrian Cunnington, head of crop storage research at AHDB Sutton Bridge.

The AHDB store managers’ guide is a good source of information for those intent on improving ventilation in their stores.

Ensuring stores are well-sealed will not only support efficient air movement but support the performance of alternative sprout suppressants such as ethylene or mint oil.

“These volatile substances need good air circulation within the store to properly distribute through the crop, but air leakage from the building is a concern. On a windy day it is not uncommon to see two to four air changes an hour in a poorly maintained store which would make the cost of applying ethylene or mint oil expensive,” says Mr Cunnington.

“The best way to assess a store’s air tightness is to stand inside, turn out the lights and see where the light is coming in.  I have seen instances where the gaps add up to nearly three-square metres which is equivalent to leaving a door open.  In these situations, it will be very difficult to retain expensive chemical,” he adds.

Potato lifting is rarely completed in constant conditions and fluctuations in temperature and humidity between crops being harvested can lead to condensation and eventually soft rots.

“The first two weeks of storage are critical.  It is always worth monitoring potato temperatures as they move into store if problems with condensation are to be avoided. If the crop coming into store is close in temperature to that which is already in store then problems are often minimal,” says Dr Wale.

“It can help to reduce the temperature of the store by a degree or so below ambient to aid the cooling of crop potatoes coming into the store,” he adds.

Skin set is fundamental to maintaining a barrier against disease, but also preventing moisture loss. This is important to supporting the long-term storability of the crop, especially with processing varieties, where it is possible to go from weight loss of 5-6% to over 10% if skin set is less than optimal.

There is, however, scope to reduce temperatures to support storage and suppress sprouting though this depends on the variety being stored. For the fresh market this is less of an issue but is more critical with processing potatoes where low temperatures can stimulate the accumulation of reducing sugars which leads to darker fry colours in chips or crisps.

“We know that some varieties, such as Lady Claire and Royal and to a lesser extent Agria, will tolerate lower temperatures whereas others such as Taurus are less tolerant, so while there is scope, it is limited at present. With processing potatoes, it is also important to reduce temperatures at a controlled rate while with fresh market varieties it can be reduced more aggressively to control blemishing diseases,” says Mr Cunnington.

Tuber temperature is also a function of how long it takes wounds to heal.

The 2020 season is 10 to 14 days earlier than a typical season so there is a good chance that quality will be better than average, but it pays to monitor crops closely at intake if problems are to be avoided later.

“It’s worth understanding how much soil is present in the box or if there are any rots present. Hopefully, these will have been dealt with on the harvester, but if they make it into store then it pays to know at what level.  Is it limited or is there something to worry about? if there a lot of rots then the stock will either need to be monitored more frequently or put to one side so they can be cleaned up at later,” says Dr Wale.

Whether or not to apply a fungicide at intake will be a decision growers with seed crops will be pondering.

“If you have a persistent silver scurf problem then it may be that a fungicide treatment is necessary to preserve quality. Similarly, there are varieties that particularly susceptible to storage diseases for example, King Edward and skin spot, where fungicides are almost a routine application,” says Dr Wale.

Diseases such as dry rot, gangrene, silver scurf and skin spot can develop during storage leading to grading losses at unloading.  To control these growers can apply either Gavel (imazalil) or Storite Excel (thiabendazole) though there are resistance considerations that will influence which product should be applied.

“Thiabendazole is a benzimidazole fungicide offering systemic, curative and protectant activity. The issue with Storite Excel arises with benzimidazole-tolerant strains of silver scurf and skin spot which are common across the UK and resistant strains of dry rot have been reported. There are few resistance issues with imazalil,” says Dr Wale.

While the prospects for most growers look promising, some endured wet weather in August and with it will have come the increased risk of blackleg.

“The problem with blackleg is that it rots the tuber from the inside so is often not detected until the crop is in store. It is one bacterial disease to watch for this season,” says Mr Cunnington.

Quiz: Are you a potato tuber & stem disease expert?

Potato tuber & stem disease control is crucial for delivering top quality, high yielding potatoes. But what level of disease expert are you? Take our quiz to find out.

That's why we've launched Potato Monthly, a regular, in-season email newsletter to help you stay one step ahead in 2021.

Potato agronomy is changing, raising the need for new solutions to old problems. In an environment where pests, weeds and diseases have no regard for the pressure to meet tight market specifications Bayer is committed to helping you produce quality crops that are also profitable to grow.