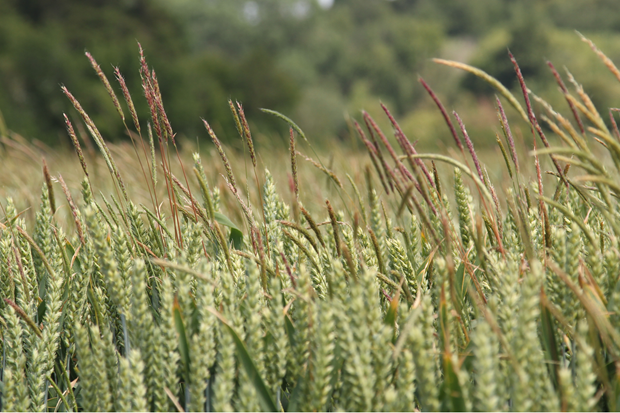 But are growers making enough of cultural controls in cereal disease management?

While new fungicides, are still being found to help growers with disease control, the loss of important options such as chlorothalonil and increasing Septoria resistance to some classes of chemistry, means the focus should continue to look at other ways of reducing or avoiding disease before using fungicides.

Incorporating cultural controls into disease control programmes as the first line of defence potentially not only helps reduce disease pressure, but will also reduce selection pressure on remaining fungicides and lower programme costs.

Here are seven integrated pest management (IPM) measures that could be used to reduce disease pressure in cereals.

Rotation is a key tool to avoid the build-up of pests and diseases, but it is for trash-borne diseases, such as net blotch, eyespot, take-all and Rhynchosporium where it has the most benefit.

Extending rotations to avoid second, third or fourth wheats is the most effective way of managing take-all, while avoiding any cereal as the previous crop reduces the risk from eyespot and Fusarium. Following maize also increases Fusariumrisk. Typically, a two-year break from a host crop is more effective than a one-year break.

While yield and marketability are key characteristics most growers will consider when choosing varieties, resistance to key diseases is (or should be) high on every grower’s list.

The AHDB Recommended List includes data on the resistance of each variety to most of the key diseases, as well as overall responses to fungicide programmes from treated and untreated plots.

Both are important pieces of information growers can use to their advantage. Choosing varieties with inherent resistance to the likely threats in the local region will reduce the level of disease needing to be controlled in-season.

For most that will concentrate on finding wheat varieties with resistance to Septoria, yellow rust and brown rust – probably in that order, as Septoria is the most affected by fungicide resistance and trickiest to control, although in some hotspots rusts might take priority.

Looking at varieties with a good overall disease resistance package will almost certainly also lead growers to select varieties with lower responses to fungicides. Disease-resistant varieties can provide growers with both greater flexibility over timing and over the intensity of programmes required, thereby helping to reduce selection pressure for resistance.

Joint Bayer and KWS trials in 2019 highlighted the potential for varietal disease-resistance to help reduce fungicide intensity. In the most Septoria susceptible variety, KWS Barrel, the best margin return came from using two SDHIs and a T3 in the programme. This held true whether wheat was priced at £60/t, £100/t or £155/t. 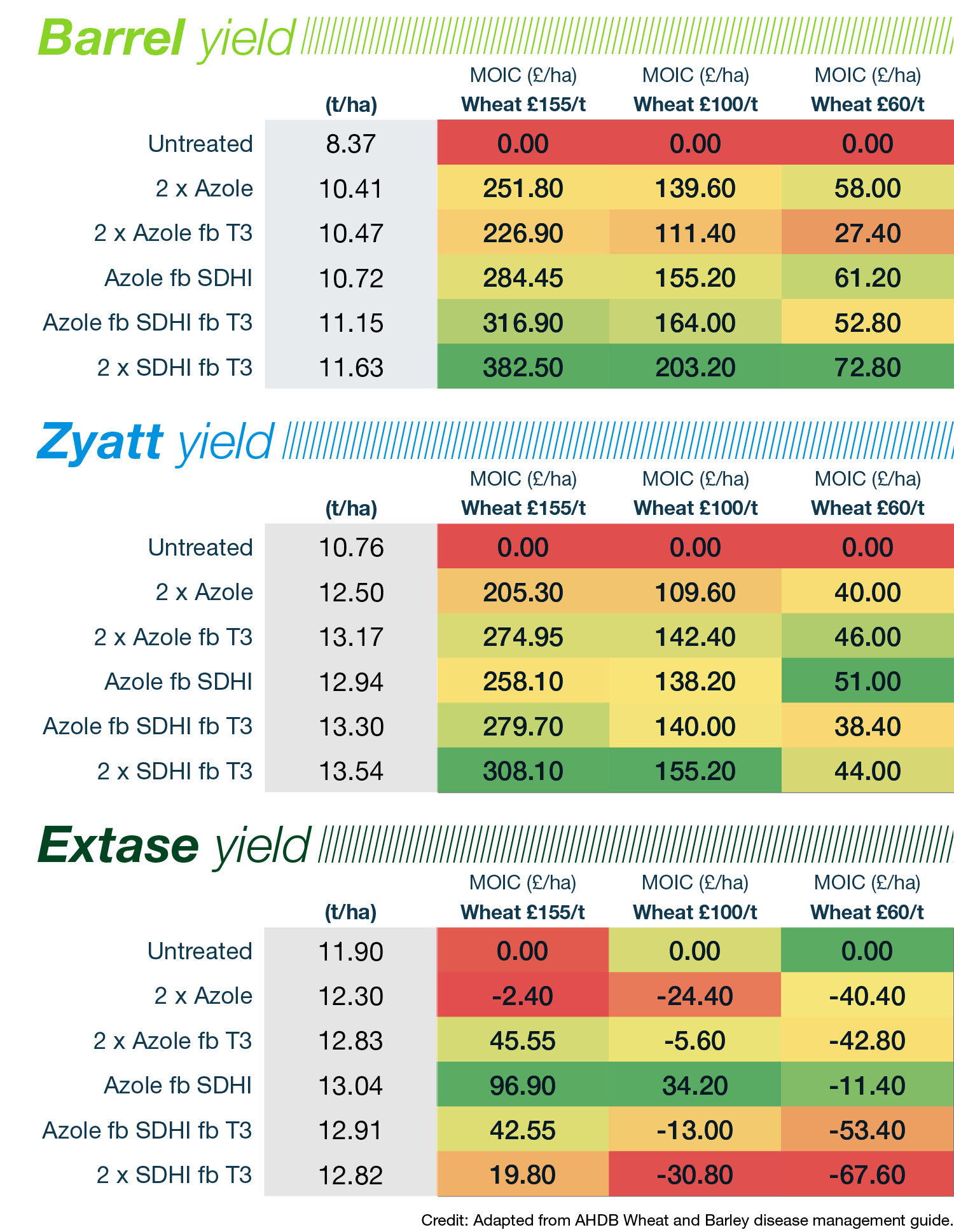 But using disease resistant varieties shouldn’t mean dropping fungicides altogether – most varieties will be susceptible to a number of diseases, even if resistant to one or two, and so will need a level of protection.  Importantly, using the two in partnership also helps protect the other, either from varietal resistance breaking down or resistance developing in fungicides.

Breakdowns in varietal resistance are fairly common for some diseases, such as the rusts, but less so in some others, such as Septoria, where resistance development to fungicides is much more likely. But recent research by Teagasc in Ireland has highlighted the potential for genetic resistance to be overcome by Septoria too, highlighting the dual role both varietal resistance and fungicide use should play.

That’s particularly the case with Septoria, where varietal resistance scores should be viewed in conjunction with drilling date. A variety with a resistance rating of 6, which is based on October drilling in Recommended List trials, may well only have actual resistance akin to a variety rated as a 5 drilled in September, for example.

With early drilling also increasing the threat from black-grass and barley yellow dwarf virus, growers can make a three-pronged attack on some of their most difficult agronomy challenges by delaying drilling as long as possible into October and November.  Of course, that comes with risk from both potential yield penalties and worse not getting the crop in the ground at all, as many found in autumn 2019, so the risk: reward balance has to be carefully weighed up.

One of the few diseases exacerbated by later drilling is powdery mildew, where early attacks can reduce tiller numbers. Late-sown crops are also likely to be more at risk from seed- and soil-borne diseases.

4. Destroy the bridges to new infections

For seed-borne diseases, such as net blotch, testing seed and treating or avoiding its use if infections are above threshold levels will reduce spread.

Volunteers or other hosts can also provide a bridge. These should be destroyed either mechanically or chemically, again to reduce infection sources.

For most diseases cultivations help reduce disease threats by either breaking up and burying infected crop residues, or reducing volunteer numbers. That’s obviously most likely where the previous crop is host for the disease, so employing a rotation that minimises that will help, as will using varietal resistance, and might avoid the need to plough or bury trash.

One disease which is perhaps counterintuitive in its threat is eyespot, which is trash-borne, but studies have found that inoculum survives better on ploughed-in trash, despite there being more trash in min-till situations.

Diseases that rely on living plant cells to survive, such as rusts and mildew, are particularly favoured by high nitrogen levels in crops, while well-fertilised crops can often produce lush growth, which is more susceptible to infection.

Risks can be reduced by carefully managing fertiliser regimes to avoid over-fertilising crops, especially early in the season when the greatest risk occurs.

Blends of different varieties can help slow or reduce disease spread in fields, especially when varieties are of different disease resistance profiles.

For diseases that spread via air-borne spores, the use of blends reduces the chances of a spore landing on a susceptible plant, and can also provide a physical barrier against spore dispersal. Researchers also believe non-pathogenic spores  can induce resistance against pathogenic spores landing on the same area of the host plant.

Recent Danish research suggests blends can reduce disease incidence by around 10% and increase yields by 1.4%, and there is also a suggestion that blends can reduce the development of resistance against fungicides.

The use of blends is not very common in UK agriculture, and care would be needed in choice of varieties and end-market acceptance.

In much the same way as growing a blend, another way of reducing disease pressure could be the use of intercropping, which involves growing two or more crops together.

This method is more common in organic agriculture, where growers intercrop cereals and legumes, for example.

In conventional agriculture, intercropping can be more challenging to manage both in terms of inputs, harvesting and planning rotations.

Black-grass control does not start with the pre-emergence herbicide programme. Doing everything possible to reduce the weed population before you drill the crop is key.

Each month our team of Commercial Technical Managers from around the country will keep you up to date with the latest agronomy advice from their region.

With the reduction in available chemistry, concerns around resistance and ever-increasing workload pressures, optimising spray timing and effective tank mixtures is more important than ever in enhancing disease control in cereals.