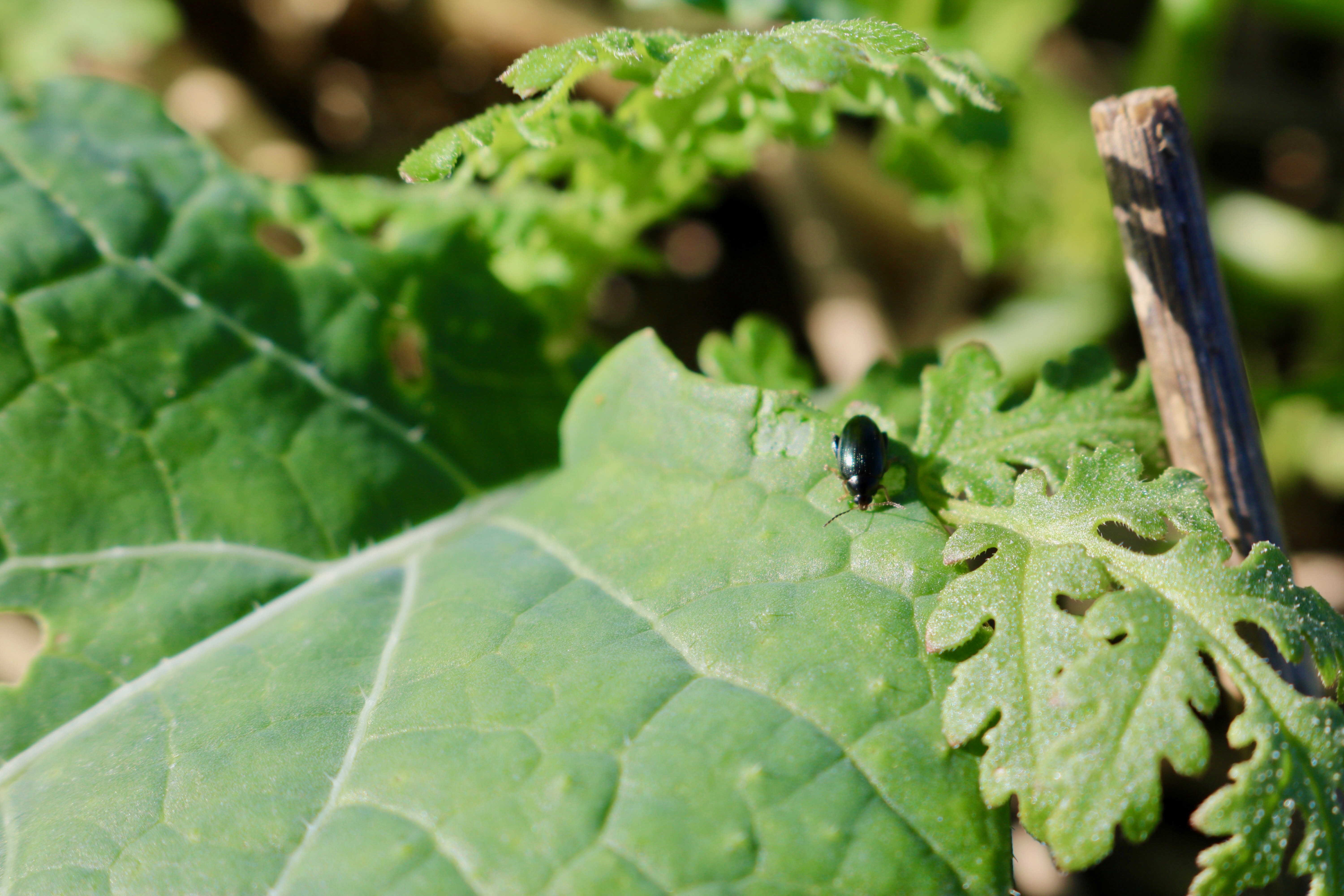 Flea beetle pressures have grown markedly at Dunkirk Farm, Birtley overlooking Gateshead’s Angel of the North in recent seasons. Yet David Hankey continues to grow crops of OSR that rival winter wheat in their margin-earning. And he does so without using any insecticides.

He puts this down to the direct-drilling regime they have developed over the past five years to improve soil biology and resilience; a recipe that includes an extended rotation, regular additions of local authority compost and horse manure from neighbouring stables; cover and companion cropping; and vigorous, fast-developing oilseed rape varieties.

Having given up cattle in 2002 to concentrate on arable cropping with horse hay and haylage production on his 140 ha family farm, Mr Hankey was finding the sandy loam soils becoming markedly more prone to slumping and surface water run-off. Things came to a head in the winter of 2012 when over 450 mm of rain between August and December necessitated a serious amount of spring re-drilling.

“We could see things were going downhill without farmyard manure from stock and grass leys in the rotation,” he explains. “So, we decided to move from our traditional plough and combi-drill system to direct drilling to try to get back to the first-class soil conditions we always had under our grassland.

“At the same time as buying our Claydon drill, we moved from a five year, all winter cropping regime to a six-year rotation involving first wheats after OSR and beans and both winter and spring barley. We also introduced cover cropping, initially with a proprietary mix and then with our own purpose-built combination of tillage radish, oil radish, phacelia and buckwheat.

“As part of this approach we gave-up spraying insecticides to avoid killing beneficials too,” adds Mr Hankey. “For the first few years we chopped all our cereal straw and left it on the surface for natural incorporation. But it’s too valuable around here. So now we bale it all for local sale and bring in green compost and horse manure instead.”

Around 25t/ha of compost is applied to around half the arable acreage each year. This season’s rape ground received it on the preceding crop of Sunningdale winter barley in late February, where it was rapidly incorporated by the ground’s thriving worm population – no less than 33 in a single spadeful at the most recent count.

Having baled and removed the straw from the impressive 11.4t/ha crop, Mr Hankey put in a mix of vetch and buckwheat with his Claydon on August 23, drilling his OSR at an angle to the companion crop the following day, with berseem clover spread from a Stocks seeder on the back of the drill.  A deliberately slow 4mph pass with a heavy set of rolls completed the process, enabling him to get the four separate species sown under the best conditions for each despite only having a single hopper machine.

“On the advice of our Agrii seed specialist, we moved from old favourite, DK Extrovert to newly-Recommended DK Exsteel this season, drilling it in at 32 seeds/m2,” says David Hankey. “Reliable establishment and fast autumn development is something we can’t do without in our varieties. But it’s important we don’t end up with overly-dense canopies.

“As well as a consistent top performer in their trials, Agrii research shows the variety is one of the most vigorous autumn and spring developers available – characters associated with much lower levels of damage from both adult beetles and larvae in their work.

“Supported by a little DAP in mid-September, the Exsteel took off every bit as well as we were promised with almost 100% establishment. And it needed to, with flea beetle causing a number of local crops to be pulled-up and our no-insecticide policy.

“The mustard we had as part of our cover crop mixture in the next-door field got badly hammered. And in the small area of the 10ha field where we ran out of companion seed, there was much more shot-holing. But the combination of very rapid OSR and companion crop growth meant the bulk of the ground was well-covered in short order and suffered remarkably little beetle damage.

“The buckwheat, which died off after the first frosts, did a particularly good early job here,” he points out. “It’s also known to be valuable in making phosphate more available and its flowers apparently attract a species of wasp that parasitizes flea beetle.

“The main flea beetle management value of our companion cropping, though, seems to be in making the field look unlike OSR. We’ve certainly found pigeons either don’t recognise the crop with a companion or are put-off landing in it, too.

“The vetch took over as the dominant companion after we lost the buckwheat and we maintained its pigeon deterrent value – as well as maximising its nitrogen-fixing contribution – for as long as we could by holding off on our Astrokerb until well into January.”

Despite an early winter paralleling 2012 for its relentless wetness, ground badly affected by surface erosion and waterlogging little more than five years ago showed none of its former vulnerabilities.  Indeed, it survived the challenge remarkably well, maintaining a great combination of firmness and friability, a level surface pock-marked with worm casts and a wonderfully humus-rich smell.

“Our direct drilling regime is working a treat,” reflects Mr Hankey. “Our soils hold much more moisture when conditions are dry and in the wet their carrying capacity is so much greater than it used to be. In many cases our headlands are now performing as well, if not better, than the rest of the field. We can drill much later into the autumn and get onto our land earlier than anyone else in the spring.

“It’s all about building-up the soil biology rather than disrupting it every year with the plough, like we used to. The Claydon does a fantastic job in moving the bare minimum of soil at drilling. Adding a spring crop into the rotation has taken the pressure off winter fieldwork.  Cover cropping ahead of both winter and spring crops has been a real revelation in breathing extra life into the soil.  We’ve measured oil radish roots down to 19” in places, and have found both beans and peas useful alongside more normal cover species.

“It’s been a steep learning curve and we still have a lot to understand about the science of soil improvement, though,” he insists. “That’s why we’re trialling different winter cover mixes alongside our own mixtures – which we call Jeremy (after Clarkson –  speed and power being critical to good covers) and Thor – across the farm this season.

“We’ve also deliberately left one field unplanted to try a summer cover ahead of next year’s OSR. Together with a companion crop, we’re looking to see how well we can maintain an active population of mycorrhizal fungi to benefit our following wheat crop.”

Putting Cover Crops to the Test

As part of the farm’s determined soil improvement efforts, David Hankey is exploring a wide range of cover cropping options across the farm this season in large-scale trials with Rhiza and Agrii.

The programme involves a total of nine different mixtures grown ahead of spring barley in areas of at least a hectare, together with a single field without any cover as a benchmark. The mixes extend from simple blends of forage rye, white mustard, vetch, oil radish and black oats to more complex soil structuring combinations also including phacelia, Asian radish, buckwheat, linseed and Austrian winter peas amongst other species. They have been selected to give a range of biomass densities, rooting structures, frost tolerances, nutrient mobilisation and C:N ratios

“Our overall aim here is to establish exactly what the covers are contributing to both the rotation and crop performance in soil health and structural improvement over a number of seasons,” he explains. “This will give northern growers a far better idea of both the practicality and value of cover cropping for their own conditions.

“Alongside it, we are also monitoring the growth and performance of David’s crop of DK Exsteel to provide a better understanding of the benefits of companion cropping in managing today’s particular OSR growing challenges.”