With less than two months to go until the fourth Youth Ag Summit, I spoke to one of the UK's three delegates Lauren Wheeler who is about to start her undergraduate studies at Imperial College London studying Biology.

So Lauren what motivates you to help achieve the huge goal of zero hunger by 2030? 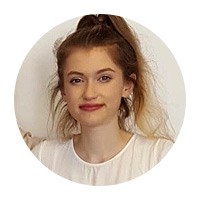 What really motivates me to get out there and play a more active role is sustainable food and the individual actions that we can take.

There are many things we cannot influence like the bigger governmental decisions but  there are many things we can actually do at an individual level that are in our control, like changing diets and reducing plastic use. It’s definitely about what we can do, and not what we cannot do because otherwise you can become pessimistic about the situation.

I’m also really invested in the intersection between sustainable agricultural practices and our health. If we can encourage more young people to understand and engage with more sustainable food choices and centre their diets around fruit and veg, whilst also learning how to cook with them, it could definitely make a positive difference and contributes towards a more stable food system.

When did this interest in sustainability first start?

I started out with a more general engagement with Girlguiding and social action which both showed me how anybody has the ability to voice what they are passionate about and make a difference. Through an interest in science and general knowledge of current affairs I quickly realised that the growing problem of climate change issues and the loss of biodiversity is a much bigger problem than many people . It is crazy to think how many people do not believe that climate change exists despite the vast majority of scientists having come to a consensus on what is happening. There appears to be a huge disconnect between science and public view on it.

Would you say then that studying the sciences was the turning point?

Yes, it was when I was studying Biology in particular at A Level that I really started to focus more on health and nutrition and how our lifestyle choices can also have a positive impact on the natural environment. For instance, walking more is good for your physical and mental health, but it also reduces your carbon footprint.

Education seems to be quite a theme for you as a tool to bridge those gaps in public knowledge on sustainability. What do you think the education system could do more of to generate greater awareness of sustainability?

There are lots of young people interested and willing to get engaged in tackling climate change but very little information produced by schools to show practical ways in which young people can make a difference. In England, we are not taught about climate change, the environment or our food either. I think there could definitely be a role for that in PHSE for example. It needs to become more mainstream in our education as they equip us for our future.

So what are some recent examples of what you actively raising awareness of the areas on health nutrition and food security that you’re passionate about?

I’ve been working with the I Will campaign which is all about youth social action in the UK. I am an I Will Ambassador for nature, recently working with DEFRA as part of the Year of Green Action. Alongside this I have also been working with SciTech, a science camp for 5-13 year olds for the past 6 years. Having been to the camp myself aged 8-13, it’s great to be able to inspire the next generation of scientists.

Finally I’m excited to have recently joined the Girlguiding advocate panel which speaks to the media and at political events on behalf of Girlguiding. They have a Girl Attitudes Survey to work out what young people are most affected by and care about changing. From that they identify key projects to develop and are currently working on a week on planet protection

Why did you apply for the Youth Ag Summit?

I became very interested in the global food crisis and in the fact that we will not be able to feed our planet as we currently do in the future without altering the way we currently go about food production. The food system is insecure and I wanted to know what we as individuals and young people can do about that at a global scale. This is what got me interested in looking at ways in which we can maybe educate young people on how they can eat in a way that’s good for their health and that of the planet which, in general, isn’t happening at the moment.

Is there anything that you’re particularly looking forward to?

Definitely meeting the delegates from different parts of the world. At the moment I am considering the problem from one specific perspective but I think attending the Summit will definitely widen my understanding a lot through being able to have all those different conversations. I love the idea of the potential for partnerships and alliances that we could make through those conversations too!

Who do are you most inspired by? Can be the UK or worldwide!

It may sound cliché but Greta Thunburg has really inspired me into action.

She was just one person on her own who saw a problem, had an idea and just went for it. Yet she has managed to spark a global movement. She didn’t go out with huge intention, she just saw something that was wrong and realised she could use her voice to change it.

If there’s one thing that you would say to someone interested in taking action what would it be?

Don’t be afraid to be the first one!

If you believe in what you’re doing and know what you stand for, just do it. Don’t wait for somebody else to do it first!

Finally, what are you most looking forward to about visiting Brazil?

I’ve never been to Brazil before so visiting a new country is really exciting! I’m also looking forward to finding out what the Summit holds and what I can learn from the experience.

Curious to find out more about the fourth Youth Ag Summit? Check out the website at https://www.youthagsummit.com/home/.