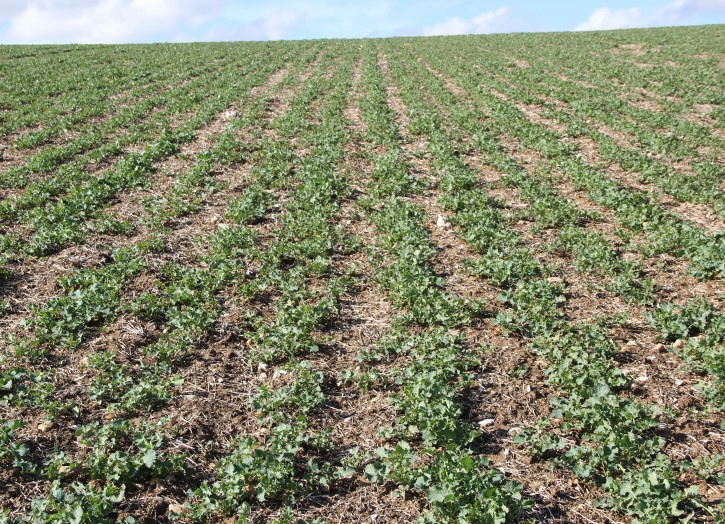 West Country grower, Chris Tanswell and his son, Ian are re-doubling their efforts to ensure reliable OSR establishment in the face of growing pressures from flea beetle.

Delaying drilling until September and moving to more vigorous, faster-developing Clearfield varieties are key elements in the determined programme they are implementing to do this with their Agrii agronomists, Mathew Hutchings and Todd Jex.  Based firmly on the company’s local research, they are also considering companion cropping, post-emergence slurry application and foliar garlic spraying to combat the pest.

They know that rapid and even establishment is essential to secure the consistent annual  average of just under 5t/ha at 46-47% oil they are achieving across the OSR that is such an important cereal break in Manor Contracting’s 850 ha arable business on the Somerset/Dorset border near Yeovil. So combatting the flea beetle threat is crucial.

“We have done well over 5t/ha from only 120 kg/ha of N in the past,” pointed out Chris who is currently growing around 160ha of OSR on four separate farms under a variety of tenancy agreements. “But keeping up the 4.5t/ha-plus performance we need for the crop to deliver at current prices means we have to do things differently – and better. Especially as far as our early crop management is concerned.”

Switching around 40% of the crop from an all-conventional variety mix into Clearfield OSR has been a real eye-opener this season.  The move was primarily undertaken to combat growing problems with charlock, runch, hedge mustard and swinecress on one of the farms. However, the DK Imperial CL that forms the bulk of the crop has shown such impressive establishment abilities that the coming season’s crop may well be 100% Clearfield.

“We’ve been seriously impressed with the vigour of DK Imperial, in particular,” said Mat Hutchings. “Especially because we are deliberately delaying drilling from mid-August to early September so the crops only emerge after the peak of flea beetle migration. Our Dorset iFarm work over several years shows this really helps reduce problems from both adult beetles and larvae.

“The Imperial came through the ground and grew away from the cotyledon stage noticeably quicker than anything else from the later sowing, with tremendous rooting.  This is just what we need to keep well ahead of the beetle, not to mention slugs and pigeons.”

“In fact, it had a GAI of nearly 3.0 ahead of Christmas, so we gave it some metconazole to calm it down,” added Todd Jex. “It went on to produce one of the best structured, most even flowering, high potential crops I’ve seen this season.

“As well as increasing our Clearfield growing substantially next season, we plan to move to the DK Impressario CL our trials have shown to have even more early get-up-and-go, together with better light leaf spot resistance and verticillium tolerance.”

They are also finding the Clearfield system valuable in allowing herbicide spend to be held back until the rape is well-established, and targeted at the weeds actually present.  They do, however, continue to use a low rate of clomazone pre-emergence to prevent early chickweed and cleavers growth compromising crop establishment.

“Even though we drilled the DK Imperial at 35 seeds/m2, almost every seed must have established, because we know the Clearfield system will have removed any volunteers from the past. This really helps our canopy management.”

“As well as helping us deal with the flea beetle threat, the combination of vigorous, fast-developing CL varieties, Chris’ tried-and tested cultivation and drilling regime and seedbed DAP means we have been able to save a good 50kg/ha of spring nitrogen this season. We may have needed a little early PGR. But this is a small price to pay for the N savings, let alone the confidence of knowing we can establish such a high potential crop despite the increasing autumn challenges.

“We only had to use a single insecticide spray and lost none of the crop.  In contrast three sprays were required on other ground which Chris only took on late last season, preventing all these essentials being put in place; and we lost a quarter of that crop.”

Based on Mat and Todd’s extensive trial work at the Dorset iFarm, they are looking at drilling a companion crop like buckwheat or berseem clover with their rape, and applying either cattle slurry or a garlic spray as the crop emerges.

“We have found all three methods can help,” reported Todd Jex. “They seem to confuse the pest by disguising the crop – either in appearance or smell. They only provide a respite of up to two weeks. But this can be critical in allowing the crop to get away. Especially with as much insecticide resistance as we know we have locally.

“The great thing about Chris and Ian is that they are always open to new ideas and are never afraid to give their crops extra support when they need it. Providing, that is, they can see a both a need and financial return.  It’s not for nothing that their OSR was the second highest margin earner in our whole MAP farm benchmarking service last season; something we are determined to improve upon this time around.”