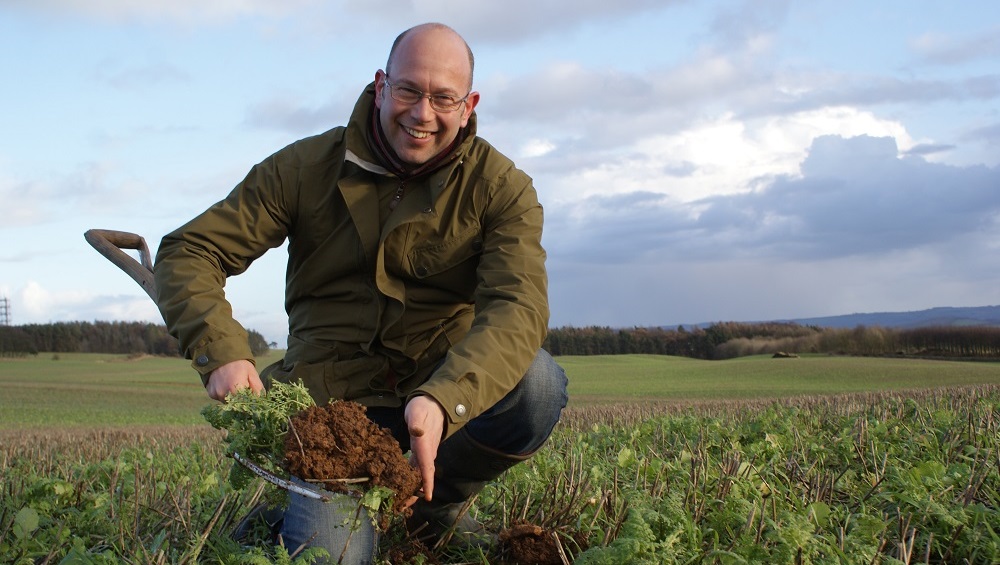 His decision was inspired after seeing the stark contrast between a no-till field and an over-cultivated one while travelling to Oklahoma for his 2013 Nuffield Scholarship.

This convinced him soil mismanagement was contributing to yield stagnation, with over-cultivating identified as a major cause of the problem.

On returning to Overbury Enterprises, Mr Freestone arranged a demonstration of a very low disturbance Cross Slot drill, initially trialling it on a few fields of very different soil types to see what could be achieved.

The 1,500 ha farm now has some fields that have been no-tilled for five years. On those, fuel use has been reduced, phosphate and nitrogen fertiliser inputs are down, biodiversity has benefitted and soils are in much better shape.

“They are carrying machinery better, the organic matter content has increased, water infiltration rates have improved and earthworm numbers have risen,” he says.

“But it’s more than a nice feeling, we are also achieving greater efficiencies and better timeliness.”

Worm counts are an easy way to measure soil health and see an immediate effect, Mr Freestone says. “A spade full of soil should contain 16 worms. If it does, you know you have around 400 worms/m3, which is a good sign.”

For a no-till system to work well, experience shows crop nutrition has to be right, especially if soil pH is high, as nutrient lock-up can happen very quickly and may need correcting with foliar applications. In addition, soil compaction has to be removed before the start of the new regime.

“Cover cropping is essential,” notes Mr Freestone. “There must be continuous green cover in the system so you can capture sunlight and grow carbon.”

Diversity is key with a cover crop, so he aims for at least four species in any mix. They are sown ahead of spring crops, but are also planted if there is going to be bare soil for five weeks or more, such as between oilseed rape and wheat.

Where a cover crop cannot be sown before September, he opts for a cheaper seed mix, so there is still green cover over the winter.

“It also gives me flexibility. On heavy land, if the weather breaks and we can’t get on to drill until spring, it doesn’t matter.”

Home-made compost is also applied across the farm, using straw from the estate’s stud farm and sheep enterprise mixed with purchased poultry litter, at 5 t/ha every 2-3 years.

Other soil health measures include replacing subsoiling with mole ploughing where necessary, and chopping all crop residues.

His main challenges have been accepting that soils behave differently as they re-structure themselves and getting all the elements to fit together, so cover crops can pay their way and be used for sheep grazing.

Despite the EU granting a new five year licence, glyphosate faces an uncertain future. “That’s a worry, because there’s no alternative for destroying cover crops, apart from cultivations, so it is a key component of our system,” Mr Freestone says.

“If we have to go back to cultivating, we will destroy the biological activity in the soil and increase weed pressure. It would be a major setback.”

Improving soil health has become a priority for the farming industry following a series of bleak predictions about the future of UK soils.