Some oilseed rape crops are at cotyledon, while others have reached 5-6 leaves. The most noticeable issue at present is the level of winged and wingless peach potato aphids I’m seeing in crops. Growers need to think about treatment to prevent turnip yellow virus infection. Bear in mind that most of the UK Myzus persicae population has Kdr or super Kdr resistance to pyrethroids, so an alternative mode of action such as thiacloprid or pymetrozine will give best results. 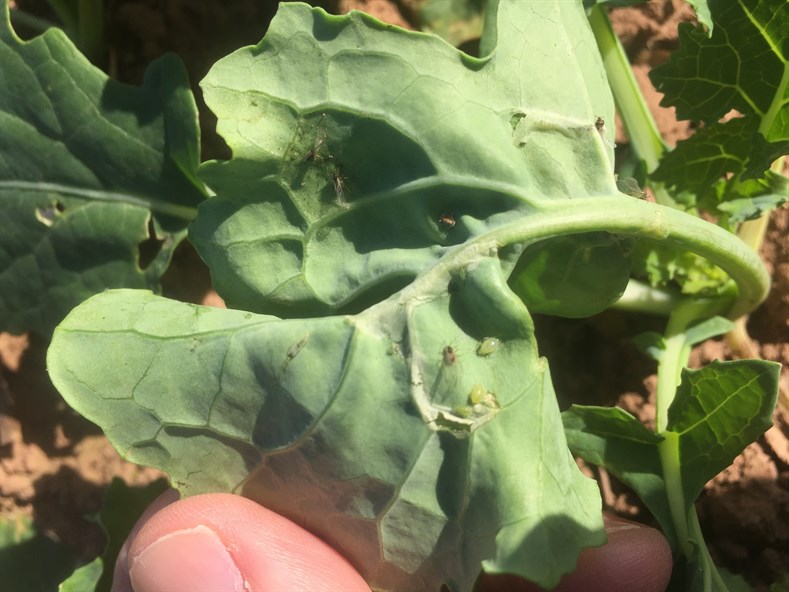 The smallest crops should be the prioritised, but even the biggest plants can suffer if infected with turnip yellows virus early enough. Average yield loss is about 15%, but if left unchecked it can be as high as 40%.

I’m starting to see early signs of Phoma and if a spray is required now, you will need to employ an autumn two-spray strategy. If going in early for Phoma, it’s best to choose a product that gives you light leaf spot protection too, as we know it is infecting crops at an early stage.

There is plenty of leaf miner in rape crops and while it looks awful, crops should withstand the damage without suffering yield loss.

Cereal drilling progress varies from those with 70% in the ground, to those with just 40%. Some will have delayed planting wheat where grassweeds are an issue. The most advanced crops are now at 3-4 leaves.

The biggest question I’m being asked at present is what to do if pre-emergence herbicides haven’t been applied on time. My advice is to get some residual on as soon as possible, as you might not be able to get on with a later post emergence spray if the weather breaks.

Consider product choice carefully, as there are potential crop safety issues. Using Liberator (flufenacet + diflufenican) with extra diflufenican or pendimethalin would be the safest option. Prosulfocarb is a bit hotter, so where it was planned pre-emergence, you may want to consider taking it out the mix. Risk will depend on soil type and applications to light, stony soil when rain is forecast is the biggest gamble. Application on heavier soils will be less of a problem.

There is the potential for cereal aphids to move into crops and spread BYDV and will require vigilance. Where seed is not treated with Deter (clothianidin), a pyrethroid application may be required. Where Deter has been used, you will get six to 10 weeks’ protection from emergence, depending on seed rate.

As a rule of thumb, a low seed rate will give you six weeks, 120kg/ha about eight weeks and higher seed rates up to 10. A follow up pyrethroid spray is advised if aphids are still active as the seed treatment runs out of steam, but think carefully about whether it is really needed.