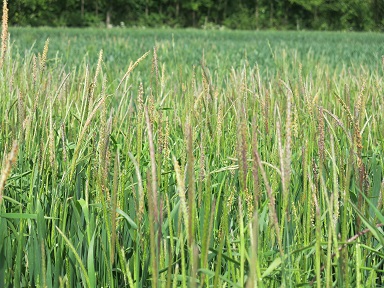 South Lincolnshire farmer Mark Tinsley was satisfied with the result when he used Hamlet on the most challenging areas of black-grass in winter wheat last autumn.

Growing cereals, roots and field veg on around 600 hectares of grade one and two soils, black-grass is a problem on the grade two silty loams that have cereals, oilseed rape and sugar beet in the rotation.

“As long as I can remember we’ve been dealing with black-grass, the moisture retentive silty loams are ideal for it,” he says. Like many farmers, herbicides used to do most of the work for black-grass control but now he is integrating herbicides into a rotational programme to get control. “We’d prefer to be growing winter wheat as it usually gives the best margin but the black-grass means we grow more spring barley in the rotation.”

The worst black-grass land is put it into spring crops, while a robust herbicide programme including a post-emergence is used on the land deemed clean enough for winter wheat but still suffering from black-grass. Last season, Mr Tinsley decided to try Hamlet instead of Atlantis on some parts of farm and was pleased with the result.

Mr Tinsley applied Hamlet in late autumn following the usual strong pre-emergence herbicide stack typically based around Liberator (flufenacet + diflufenican) or Crystal (flufenacet + pendimethalin) plus partner products. “We see significant black-grass populations in November so we prefer to get the post-em on early before soils and weather conditions cool down too much.”

Winter wheat crops are typically drilled at some point in October but he admits it is a case of holding your nerve particularly when conditions are fairly wet like this year. “The game is how long do you dare to wait into October? On the heavy silt, I know that about one year in three late drilling will be a real problem due to wet conditions.”

Delaying into October is not easy and the full herbicide programme isn’t cheap but Mr Tinsley recognises that they are the most reliable way to reach 10 ts/ha wheat yields which typically is enough to recoup the investment in agchem with a decent margin on top – depending on the grain price.