A new survey commissioned by Bayer and carried out by the independent agricultural research agency, Kynetec, has demonstrated the depth of concern shared  by UK arable farmers regarding current European Commission proposals to ban all outdoor uses of neonicotinoid seed treatments in the EU.

Of the initial 1260 arable farmers surveyed, 60% (760 growers) used the neonicotinoid seed treatments, Deter or Redigo Deter in cereals this harvest year. These product users were then asked about the impact of a potential ban on their cereal cropping.

As can be seen from the graphic below, 80% of those farmers believed that such a ban would have an impact.

Spokesperson for Bayer’s Crop Science division in the UK, Dr Julian Little said,“The results of this survey underline the serious repercussions that would result if the European Commission’s proposals to ban neonicotinoid seed treatments come to fruitition. At a time when we are discussing the need for UK farmers to become more competitive post-Brexit, these proposals threaten to seriously impede their ability to grow a high quality wheat crop with a yield that could help them compete with farmers from the rest of Europe and around the world.”

“The UK Government should vote against these proposals at the forthcoming EU Standing committee outright  as wanton vandalism of UK agriculture. The cereal farmers in this survey have shown very clear concerns but these proposals also threaten sugar beet growers farmers and vegetable producers.”

Currently neonicotinoid seed treatments are used on around 50% of the UK wheat crop to control aphids that spread pathogenic diseases such as Barley Yellow Dwarf Virus (BYDV), and deter slugs from attacking planted seeds.

In the absence of such seed treatments for BYDV, farmers will turn to foliar sprays of broad spectrum insecticides such as pyrethroids. Not surprisingly therefore, 82% of the farmers confirmed that they would need to spray more and 74% of them felt that pest control  would cost them more as a result.

Around 50% of farmers who use neonicotinoid seed treatments such as Deter use them as an alternative to slug pellets, especially in situations where the slug pressure is low. Two thirds of farmers felt that losing Deter or Redigo Deter would lead to them applying more slug pellets and 72% feared adverse environmental impacts.

Perhaps most significantly given that there are alternative foliar sprays, over 50% of farmers believed that their loss would result in decreased cereal yields. 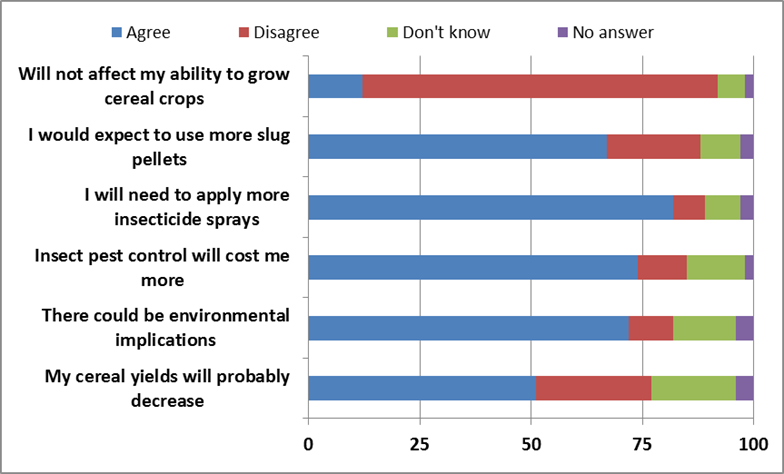 More information is available at http://cropscience.bayer.co.uk/about-us/save-our-seed-treatments/act-now/