So Thursday 29th June was when the Centre of Ecology & Hydrology finally published their pan-European field study on the impacts on bees as a result of foraging on neonicotinoid seed treated or untreated oilseed rape. Carried out in three countries – the UK, Germany and Hungary, the study was published under the title “Country-specific effects of neonicotinoid pesticides on honeybees and wild bees”. It then goes on to point out that the research showed that neonic seed treatments harmed honey bees as well as the ability of bumble bees and solitary bees to establish new colonies in the subsequent year after the treatment. Pretty damning stuff on the surface?

But looking at the paper, and the supplementary data associated with it, a very different story emerges. For the honey bee part of the project, incidentally which Bayer and Syngenta funded, of the 258 honey bee analyses reported by CEH, 238 had no effect, seven were positive and only nine were negative the remaining four could not be reported on due to the poor quality of the data.

And this is where “statistical significance” rears its head. At no point did the authors report on the 238 analyses where “no difference” between bee colonies foraging on treated or untreated oilseed rape was seen. The fact that you can find small negative differences in honey bee colonies in the UK was highlighted but the fact that the equivalent data for Germany showed the opposite, ie that bees in this part of the study did better on neonic-treated oilseed rape was glossed over.

So the paper was entitled “Country-specific effects…” yet in the case of the wild bee studies, the authors decided to focus on aggregated data from all three countries to present their data in the scientific paper. I thought this a little strange so I looked at the data for just one of the countries – not surprisingly, I chose the UK.

Below is the data straight out of the Science paper but with the German and Hungary data removed. Remember, I have not manipulated the data in any other way. For queen production in the bumble bee studied, the data for the UK showed no correlation with neonic residues in the bees’ nest. 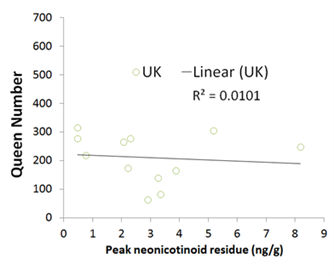 Likewise for egg production by the solitary bee, Osmia, there is no negative correlation with neonic residues in the nest. 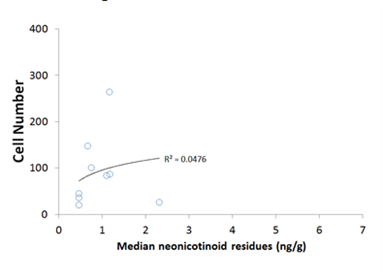 I explain the wild bee data in a much clearer way in another blog article that I have put together http://cropscience.bayer.co.uk/news-and-opinion/articles/2017/06/do-the-neonics-in-the-ceh-study-actually-impact-on-queen-or-cell-production-in-bumble-bees-and-solitary-bees/.

In the end, I am left with the feeling that a scientific paper has to focus on what is statistically significant, irrespective of whether it makes sense when you look at all the data.

So do I think this paper improves our knowledge about whether neonicotinoid seed treatments are harmful to bees? Yes I do but probably not in the way it has been portrayed in this paper!