In the Science paper two graphs are included, apparently showing a statistically significant impact of the levels of neonicotinoid seen in a bumble bee or solitary nest with resultant queen or cell production in their respective nests, and this has been used to suggest that there is a potential for neonic seed treatments in oilseed rape to impact negatively on the provision of new colonies of wild bees in the year subsequent to the treatment. 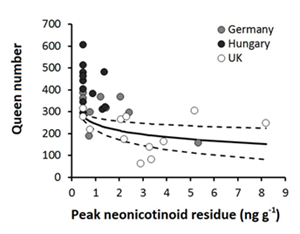 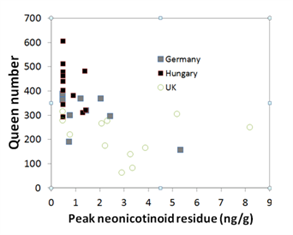 As can be seen from the UK data in Figure 3, and for Hungary and Germany in Figure 4, there is no correlation between the peak amount of neonic residue found in the nest and resultant queen numbers. 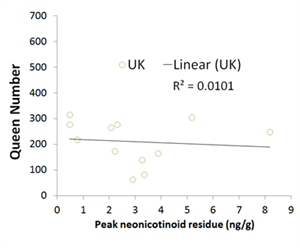 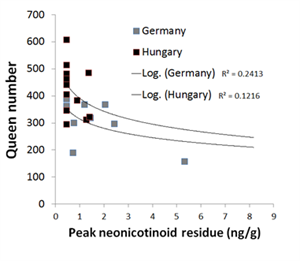 Indeed, upon closer inspection of the original data cited in the paper, it becomes evident that the “apparent” correlation seen in Figure 1 is due to the high numbers of queens found at the limit of detection of neonics (=a functional zero between 0.5 and 0.6 ng g-1) in Hungary and the data from the UK at higher residue levels. Note the critically low R2 values for the plotted lines highlighting the lack of correlation between neonic residues and queen numbers. Perhaps the clearest conclusion from this data is that Bombus colonies deliver fewer queens in subsequent years in the UK than Germany irrespective of whether they are exposed to neonicotinoids.

Turning attention to the Osmia data, a similar re-analysis of the data for this solitary bee was made to see if country-specific effects could be seen. 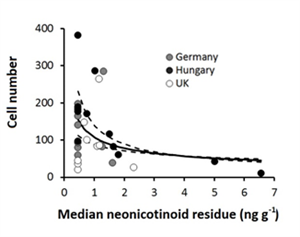 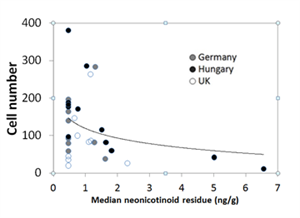 As can be seen from Figures 5 and 6, it was possible to reproduce the Osmia data, allowing confidence in looking at the data for the UK (Figure 7). Clearly there is no negative correlation between the amount of neonicotinoid residue in an Osmia nest and the number of cell numbers it can produce in the UK. The data for  Germany and Hungary has yet to be analysed. 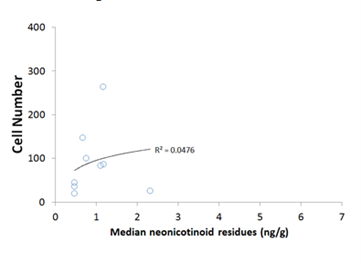 Conclusion: The Sciencepaper suggests that there may be correlation between exposure to neonicotinoid residues found in a nest of a bumble bee or solitary bee and its subsequent ability to produce queens or new cells respectively, yet the data is aggregated from what looks like very different situations. Upon disaggregation, the data, especially for the UK appears to indicate no such correlation – ie, the levels of neonic residue in a wild bee nest has little or no influence on bee colony viability in subsequent years.