A combination of varietal resistance and a well-timed fungicide programme will provide good control of yellow rust, despite recent genetic shifts in the pathogen’s UK population.

Yellow rust is perhaps the most dynamic disease wheat growers face, having the ability to sexually recombine – which only occurs in Asian populations – or genetically mutate.

Airborne fungal spores also have the ability to travel vast distances across countries and continents.

This means it frequently overcomes varietal resistance, either by the arrival of a new race from overseas or the pathogen
overcoming a variety’s resistance gene or genes through genetic mutation.

The disease has posed a particular problem in the past two seasons, with higher levels seen outside typical hotspots in eastern England and in varieties with high resistance scores and it is now evident that new races were responsible.

Sarah Holdgate of NIAB, who leads the UK cereal pathogen virulence survey (UKCPVS), says before the arrival of the now-dominant Warrior race from Asia via Europe in 2011, changes in races were relatively predictable.

However, researchers have picked up two new races in the past three years, with the discovery of the “Kranich” race in 2014
and what is set to be confirmed as the “Invicta” race in 2015. These races were much more widespread in the following year after first detection.

“The Kranich race is broadly related to the Warrior race but in tests last year we saw some unexpected susceptibility in varieties such as Graham and Spyder. 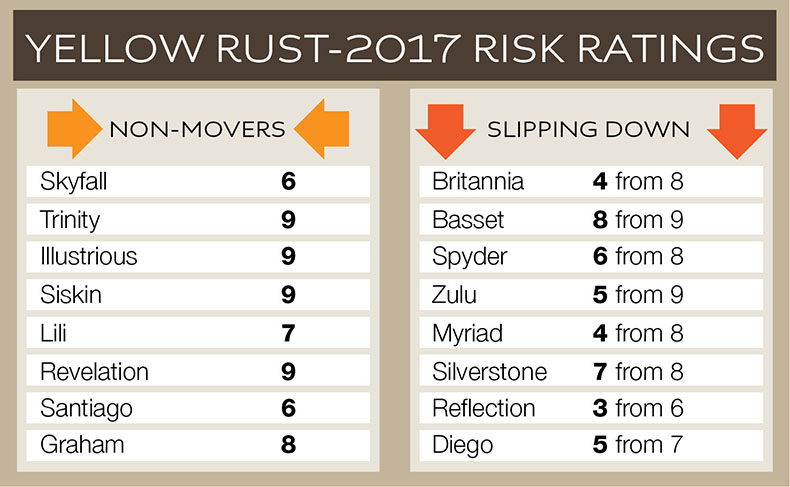 “I’m sure we will see it again this year [after sample testing is complete], but it isn’t yet clear how widespread it is,” explains Dr Holdgate.

Another variant was detected in the field during 2015 and is thought to be responsible for unusually high levels of the disease in Lincolnshire that spring.

It resembles the old Solstice race, but was found to be genetically unrelated.

Instead, like Kranich, it is broadly related to the Warrior race, but not virulent on the variety Warrior, hence the requirement for a different name.

As it was found to be damaging the usually-robust variety Invicta, it has been provisionally labelled the Invicta race.

This shift in the UK yellow rust population has resulted in an unprecedented move from the AHDB to downgrade resistance
scores of 16 winter wheat varieties on the Recommended List before publication of the 2017/18 edition.

Typically, yellow rust scores are based on a three-year average, but it was thought a disservice to the industry to stick with that policy, as it would have diluted the impact of the new races and provided growers with an inaccurate indication of disease risk.

Dr Holdgate expects the Recommended List board to go back to using a two-or three-year average, but much will depend on how the disease behaves during the upcoming spring.

“We need to be reactive to any changes so we can provide the best information to growers and agronomists,” she adds.

NIAB cereal disease expert Bill Clark says he was pleased and relieved the AHDB took the decision to drop ratings to reflect what was happening in the field. 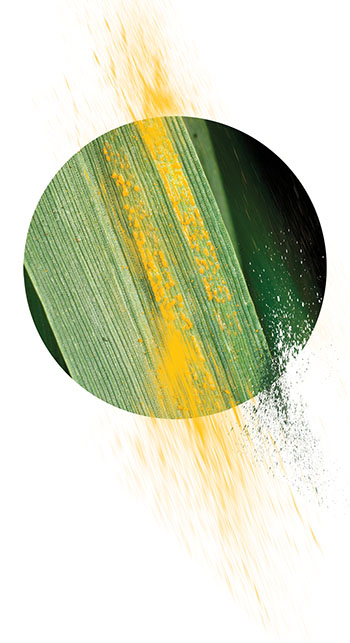 However, he believes that with the increasingly unpredictable nature of the disease, growers should not be complacent, even with varieties that have higher resistance scores.

“There are a number of varieties with a score of 8 or 9, but don’t expect not to see yellow rust on them.

“The ratings are very good and generally reflect what you might see, but they are a national average and there will be regional variation. That is particularly the case in varieties with 6s, 7s and 8s,” he explains.

This is backed up by the experience of last season, where varieties Reflection, JB Diego and Britannia, among others, saw higher-than-expected levels of yellow rust, despite ratings between 6 and 8 at the beginning of the season.

“Growing varieties with 4s and 5s, you know you have to take it seriously, but with 6s to 8s, you still can’t afford to relax with
these changes going on. They still need to be carefully looked at and managed for yellow rust,” says Mr Clark.

The untreated wheat plots carried some autumn infection into the spring after a mild winter, but a dry spell in early March stopped the disease in its tracks.

“It popped up again at T1 and shows that it’s a disease you can’t take your eye off. There must have been latent infection there and it can flare up so quickly given the right conditions,” says Mr Adkins.

The good news for growers is that the race changes will not impact on fungicide performance and very effective products are
available to control yellow rust throughout the programme, but Mr Clark says it is imperative to stamp out infection early.

He adds that a T0 is a must on varieties with a resistance score of 5 or below, unless temperatures plummet and kill off any disease ahead of spring.

“It’s a cheap spray and not applying it is a risky strategy. Using something with activity on Septoria and yellow rust will give you flexibility at T1 if conditions are catchy.”

Mr Adkins also urges early eradication and the inclusion of a rust active azole or strobilurin at T0 if yellow rust is active and
sporulating in the crop.

Following T0 sprays, he says a Septoria focused programme at T1 and T2, with products containing at least a 75% dose of
azole and a SDHI will keep a lid on yellow rust in most years.

Bayer’s recommendation for 2017 is Aviator at T1 and its new three-way SDHI-azole co-formulation Ascra at T2, both of which contain an 80% dose of prothioconazole to meet that criteria.

“When gathering the fungicide performance data, only one application is used in a high-risk situation to pull products apart, but after a two azole SDHI programme at T1 and T2 you would struggle to separate epoxiconazole and prothioconazole products for yellow rust control.”

If yellow rust is established in the crop at these timings, Mr Adkins does advocate the addition of pyraclastrobin to boost knockdown, with SDHIs adding little other than protection.

“Brown rust should also be well controlled with a similar programme, as you get more activity from the SDHIs on this disease,” he says.