Underestimate Ramularia leaf spot at your peril. While Scottish growers have been battling it for nearly 20 years, it’s a disease all barley growers need to be wary of.

First identified in Scotland in 1998, Ramularia was initially considered just a northern problem costing the Scottish barley industry an estimated £10m a year, but incidence has takenoff, putting crops throughout the UK at risk.

Yield losses can be up to 0.9 t/ha, but average around 0.5 t/ha, while quality can be reduced by more ‘thin’ grains and
therefore higher screenings. Incidence is often sporadic and detection can be tricky, complicating management.

Ramularia is predominantly a seed-borne disease residing deep within barley grains, but can spread by wind-borne spores too, explains Neil Havis of Scotland’s Rural University College.

It has a long ‘asymptomatic development’ phase, which means disease can be present without visible symptoms for long periods, only expressing itself when conditions are conducive, particularly after flowering.

Ramularia can therefore lie undetected on farm-saved and certified seed and seemingly ‘clean’ crops may harbour disease, he warns.  “It’s a late-season disease with spore production peaking in July and August which is why symptoms may be less
noticeable in drier regions where crops senesce earlier.”

“In the past it’s been misdiagnosed as abiotic stress or the spot form of net blotch, although recognition is improving.”

Ramularia research is ongoing, including a new AHDB risk assessment for growers that should be ready in 2018. Graham McGrann, formerly of SRUC, says understanding Ramularia genetics is key to future diagnosis and control.

But biologically Septoria and Ramularia are very different. “Ramularia doesn’t spread up the plant like Septoria, so is not
relying on splash events to move spores. The disease grows in spaces between plant cells and needs free moisture to
facilitate growth and later spore release.”

T2 fungicides are the main control option in spring and winter barley, with the optimum timing being GS 45-49 (booting). Sprays applied after symptoms develop on upper leaves post-flowering will be ineffective.

Proline is the most effective triazole, while Siltra is the stand-out SDHI, as demonstrated by AHDB dose response trials 2012-15 where it outperformed Bontima and Adexar.

This was highlighted in 2016 trials by Prime Crop Research (PCR) on KWS Cassia winter barley at Woodbridge, Suffolk.

Siltra (0.4 L/ha) at T1 and T2 reduced Ramularia incidence from 60% on untreated leaf two in mid-June to 19%, giving a 1.0 t/ha average yield benefit over the untreated. Including CTL with the Siltra treatment at T2 reduced disease severity to 3% in this trial and added another 0.5 t/ha.

PCR’s Dr Tom McCabe comments: “Cool, wet weather created high Ramularia pressure, but the results were consistent with previous trials in Ireland showing the benefit of including CTL at T2 where there is a moderate - high risk of late-season
Ramularia infection.

“Where Siltra is used at modest rates Ramularia pressure is high, it’s worth including CTL. It’s also a good antiresistance strategy as Ramularia is a highrisk pathogen.”

Dr Havis says the T1 spray helps reduce Ramularia infection, but control is less effective than at T2. “Where Rhynchosporium is a problem, growers may prefer to target their best SDHI at the optimum time to control it, which is usually T1.”

Varietal resistance helps control but cannot be relied on, says Dr Havis. Winter varieties offer the greatest differences in
resistance and although there is no official RL rating, AHDB has published ratings for ‘Informative purposes’ in Information
Sheet 47.

Resistance ratings for spring barley were in the Recommended List for the first time in 2016.

Research is ongoing to find a genetic marker for resistance against Ramularia, which breeders could use to develop future
varieties, says Dr McGrann.

Ramularia affects oats, wheat, rye and other grasses without visible symptoms, and work is ongoing to see if these act as a
‘bridge’ for cross-infection. 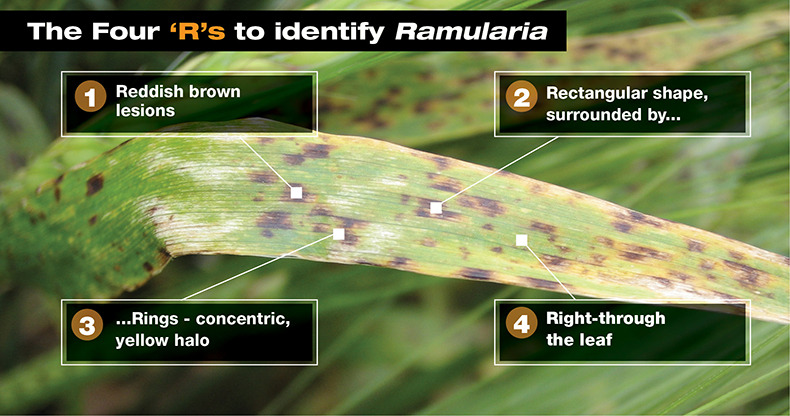