Barley was one of the very first grains to be cultivated over 10,000 years ago. These days it remains an important crop, ranking fourth highest produced cereal in the world after wheat, rice and maize. In the UK, barley feeds our livestock and is an essential component of the multi-billion pound malting and brewing industries. It’s tough too, and has a higher tolerance of poor soils, drought and cold than other cereals.

Despite its resilience, the success of its growth is still very much hampered by diseases, and farmers have a perennial battle with fungal pathogens to try and deliver quality grain (particularly for the malting industry) and high yields year after year. As if this wasn’t enough to contend with already, the farming industry is also under pressure to increase crop yields while simultaneously reducing the effects of farming on the environment. 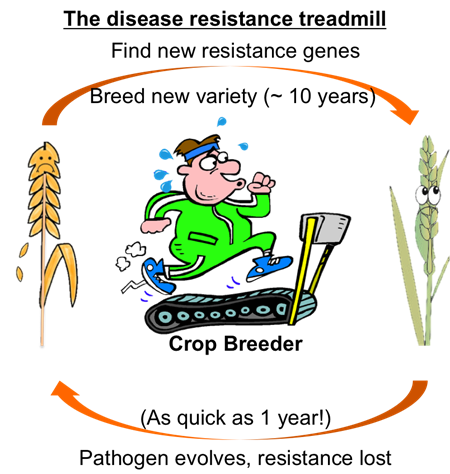 One way to tackle these issues is to make genetic improvements to our existing crop varieties. If we can increase the innate ability of our plants to resist disease this can improve yields and grain quality and reduce losses and negative effects on the environment.

But there’s a catch. A well-established problem with crop disease resistance breeding is that pathogens quickly evolve to escape recognition by the plant. This means crop breeders are constantly looking for new resistance genes to combat newly evolved pathogen strains.

At the Sainsbury Lab in Cambridge we’re trying to break the cycle by searching for genes in barley with potential to provide longer-lasting resistance. Instead of looking for genes involved in recognizing an invading fungus, we are trying to find those that are actually required by the fungus to be able to cause disease.  Small changes in these plant genes can render them non-functional and prevent fungal infections, hopefully without impacting the normal growth of the plant. A good example is the non-functional version of the Mlo gene, which has provided resistance against mildew causing fungi in barley varieties for over 40 years and continues to be effective!

By making genetic improvements we are aiming to achieve the maximum natural potential from our crops. And, although we will never be able to fully eradicate crop disease, we can definitely soften the blow by making sure our plants have the best possible defences