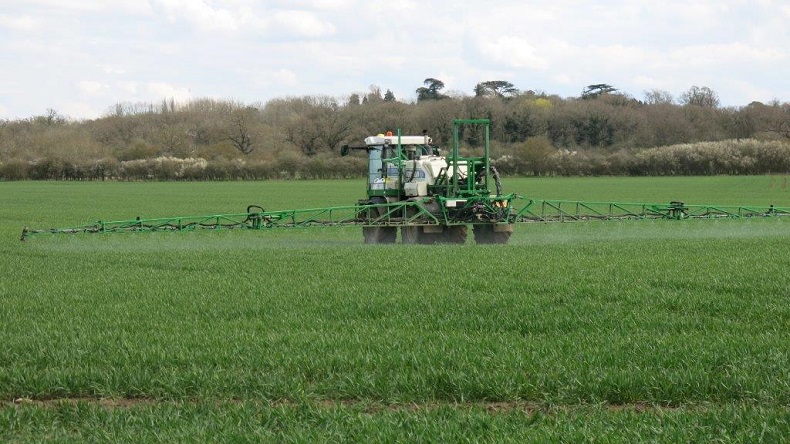 With many T0 sprays hampered, highly variable crop development and Septoria coming through another mild winter the season ahead looks challenging. And there is the matter of low wheat prices to contend with.

Mr Sparling expects T2 sprays to be robust and warns of a possible repeat of 2014. “I’ve been seeing Septoria since November, and we didn’t get a winter to check it. We now have forward crops with plenty of biomass, especially those drilled in good time.”

That biomass could create the perfect conditions for disease this season, he says. He has noted in the past how the disease has continued to cycle in the lower part of the crop. “In 2014 we had these lush, forward crops and it intrigued me how the disease kept cycling. Ahead of flag leaf sprays,T0 and T1 applications protected leaf 3, but latent disease in the upper canopy was present.With more favourable conditions in the bottom of crops it just keeps going. In such situations robust T2 sprays are essential.”

As a result Mr Sparling will be considering full rates of SDHIs this season. “Throwing money at a problem is not a solution but  with wheat at just over £100/t we have to protect yield potential. Even a moderate Septoria infection will cost a grower more than upping the dose of Aviator235Xpro from 1.0 L/ha to 1.25 L/ha.”

Regardless of what SDHI product Mr Sparling uses it will be supported by an 80% azole dose. “Some growers might be a bit weary of the repeated calls to protect azoles and SDHIs but its importance cannot be over emphasised. If we lose the ability to control Septoria it could make profitable wheat production extremely challenging.”

Another given is that azole partner will be prothioconazole or epoxiconazole.He feels that SDHIs need to be partnered with the most Septoria active options. “We must be supporting SDHIs with the most efficacious azoles. Prothioconazole is the better Septoria protectant, epoxiconazole a tad stronger against yellow rust. But when used in a four spray programme there is little between them. I might include CTL for a bit more Septoria protection or a strob if I need some yellow rust kick back,” he adds.

Mr Nicholson says a move to full rates of SDHIs should be considered this season. His worry is where T1 applications have  been brought forward to deal with compromised T0 sprays. “I can understand the desire of growers to get back in where T0  sprays have been hampered, but the danger is that leaf three might not be fully protected. Even with highly systemic formulations such as Leafshield in Aviator235Xpro active movement through the xylem is more towards the leaf tip. In such cases the chances are that Septoria will be present or in an advanced latent stage on the lower part of leaf 3 come GS39.

“Even the more resistant varieties will only slow the development of the disease rather than stop it, so timing and dose will be vital for T2 applications. The curative punch of SDHIs will be very welcome, and for the more susceptible varieties I’d also  consider upping rates of Aviator235Xpro to 1.25 L/ha. With wheat at just over £100/t there is no margin for error.”

Nothing surpasses Aviator235Xpro when it comes to Septoria control he adds. “Nobody minds spending a bit more if you’re getting something for it, but that isn’t the case here.When you look at the wealth of data it is clear that Aviator235Xpro and Adexar are the stand out products. But try and split the two and you cannot.

“For the last four years our trials, and those with independent collaborators, it has been impossible to pick them apart. From 73 separate trials the yield data for both is the same – final yield of 10.79 t/ha. In some trials we see 1.0 L/ha dose of  Aviator235Xpro come out top, others it is Adexar at 1.25 L/ha, in some we get a neutral result. The only real difference has been the cost of the chemistry which shows Aviator235Xpro costing £5/ha less.”

73 Bayer and independent trials with NDSM, NIAB TAG, ADAS, SRUC, OAT and SA. Overspray applied at T0 and T1 with T2 spray targeted at GS39. Septoria was the main disease in all trials. *Source: Kynetec 2015.

In protectant situations such as T1, Mr Nicholson endorses that the inclusion of CTL or folpet will boost protection but is cautious at T2 where the curative properties of SDHIs are needed. “The surface binding properties of the multisite protectants will impair the movement of most modern fungicides. If you have Septoria in the leaf the last thing you want to do is slow down the movement of curative actives.”

The variable state of winter wheat development means in some cases cereal disease defence has started late. Here Mr  Nicholson is more relaxed but warns growers not to delay T2 applications and that timing is critical. “Of course control will again be compromised and leaf three in particular could have been exposed, however, azoles are still giving some curative activity as well as the SDHI. Provided you come back in as the flag leaf is just fully emerged with a well-timed minimum 80%  dose of a highly active Septoria azole + SDHI coform you will achieve the necessary flag leaf protection.”