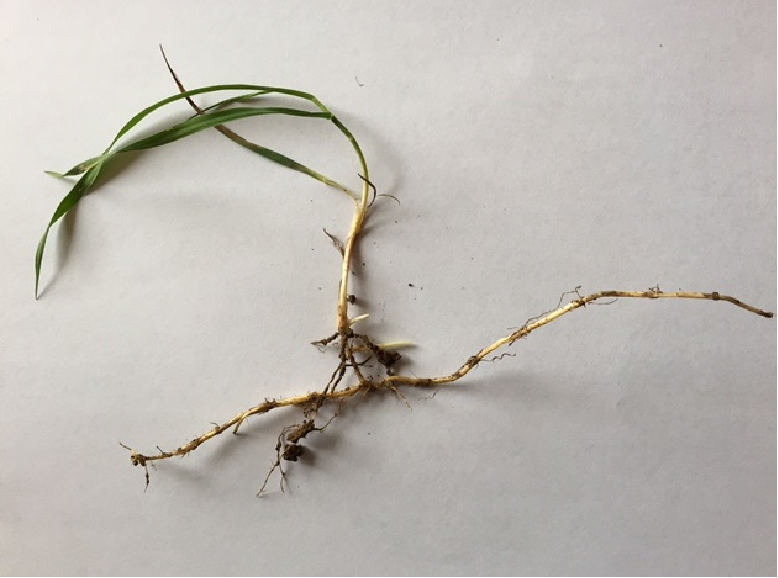 Sometimes you have to remind people that farmers are not recreational sprayers of pesticide – controlling pests and diseases is a critical part of providing consumers with food. And so to couch and potatoes…is is couch grass (pronounced coo-ch), also known as twitch or scutch. It has long thick underground stems called rhizomes that quickly spread out and it only takes a tiny piece of rhizome for a new plant to grow and form a dense mass of growth in the soil. I vividly remember my agronomy tutor recounting his experience with a potato grower many years ago who failed to control his couch grass problem. The grower lost his entire potato harvest because every tuber had been ruined through penetration by these thick white rhizomes.

So is this a huge national problem? Are chips under threat, and should people with allotments start to panic? Currently no, and for two reasons. If you find this weed in your veg patch you might turn to the Royal Horticulural Society website for advice on dealing with it[1]. First off there is the non-chemical method of digging the weed out, ensuring you get every part of the rhizome otherwise you will soon be back to do the job again (one blog advises digging over three times, or even four). This is pretty daunting even in the smallest herbaceous border, but imagine if it was across a whole allotment, or even a field.

I spoke with a grower last week who remembered ‘couch bonfires’ in the 1970s. The infested field had to be raked, then raked again (and again) with machinery to pull up the weed and try to exhaust any remaining rhizomes, and the resulting haul had to be burnt. Can you imagine that coming back to the British countryside? Or the time, diesel use and soil erosion resulting from this on a large scale? That is why the second option available is so widely used and vitally important: it is chemical control in the form of glyphosate.

This chemical has been in the press recently because it is coming up for reregistration. The European Food Safety Agency concluded it is unlikely to pose a carcinogenic threat[2] but research continues from other bodies and while ever more evidence is awaited the scene has become significantly politicized. The European Parliament registered their concern by calling a non-binding vote about the reregistration of glyphosate. This was such a worrying and hasty move plenty of UK farmers boarded the Eurostar to Brussels to lobby for the protection of this essential chemistry, and several gardeners also stood up for it in the press. Despite all the hype, glyphosate passed that Parliamentary vote and we await the European Commission’s verdict.

For all the discussion about glyphosate and other herbicides, it is vital to remember why they are used: weeds need to be controlled because they compromise the production of food. So next time you are on the sofa enjoying some crisps and your favourite TV show, remember that whether it is in a direct way like couch grass growing through potato tubers, or indirectly like black-grass outcompeting a wheat crop by taking nutrients, water and light, weeds present an enormous challenge to the task of getting safe, high quality food onto our plates, whenever we want it and at a price we can afford.

[2] EFSA, Conclusion on the peer review of the pesticide risk assessment of the active substance glyphosate,  12th November 2015, http://www.efsa.europa.eu/en/efsajournal/pub/4302