Looking to the future of
Farming Technology 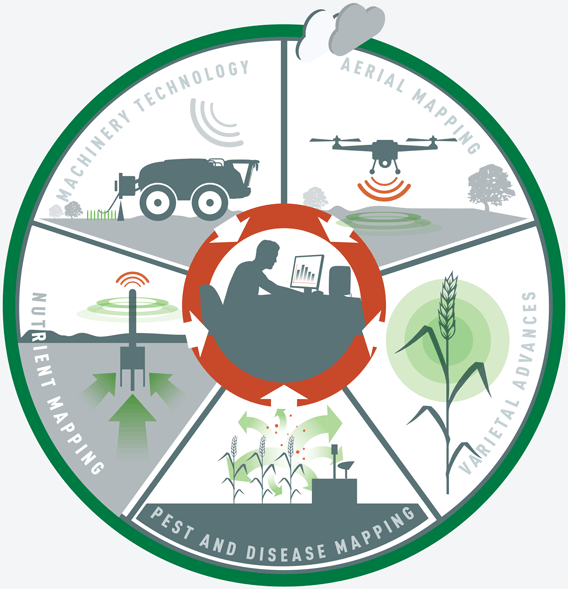 Farming technology has advanced massively in the past 10 years, but with a wealth of tools and systems available where will technology lead us over the next decade?

From auto-guidance systems, drone mapping and pest / disease forecasting tools to the latest high-yielding, disease- resistant varieties, there are countless examples of how technological advances are shaping a new era in agriculture.

All aim to help growers improve productivity, but with so much available the challenge now and more so in the next 10 years, is deciding how best to use these tools and interpret the data to deliver a tangible farm business benefit. 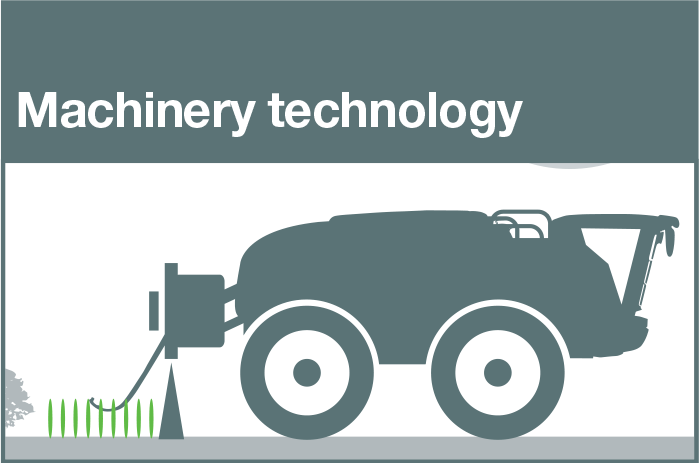 The biggest change to machinery technology over the next decade is likely to be the integration of precision farming systems as manufacturers move to “semi- automate”field operations, says Dan Halliday, global product manager for precision farming at New Holland.

Alongside auto-guidance and variable rate technology, a number of systems already exist to collect a wealth of machine diagnostics and agronomic data while on the move, so the main development will be how this is analysed, interpreted and presented to improve productivity of operators, machines and crops, he says.

Development of slicker, consumer-styled in-cab displays that allow operators to access all information available will be key to this, in a similar way to the advances in in-car systems, he says.

A single touch-screen, web-linked device will give operators access to machine critical data, such as fuel use, engine load, diagnostics, etc, together with agronomic data collected from real-time machine- mounted sensors or from other remote sensing (e.g. ground stations, drone mapping) data.

Greater compatibility across systems will be crucial to future success, says Mr Halliday. “The industry as a whole has definitely got better, but there’s definitely more work to be done.”

Better data connectivity, especially in more remote areas, is also required as systems increasingly rely on cloud data storage and instantaneous access to data from a variety of mobile devices, he adds.

Most systems use mobile networks (2G/3G connection) to transfer information, but there is scope for more farms to use private wifi networks or satellite communications as the technology becomes more cost - effective.

Indeed, improvements to mobile phone and internet network coverage could make the biggest difference to many farmers where signal quality is still poor, or non-existent. With cloud-based data storage becoming the norm, it will allow more farmers to use web applications to remotely access farm management data from a smartphone, tablet or other web-enabled mobile device.

Real-time data recording of field applications and machine use will become more mainstream as technology and mobile coverage improves, hopefully reducing the time spent inputting data in the office.

Specialist services offering remote mapping of fields from the air with a drone (Unmanned Aerial Vehicle) are set to become more widely available over the next decade, driven by advances in sensor technology that allow more variables to be mapped with greater accuracy.

The firm is working to expand its black-grass mapping service to other grassweeds such as brome and ryegrass, and is involved in a long-term project to develop a drone-based system of diagnosing Septoria in winter wheat. Work in Scotland is also underway to map potato cyst nematode damage in potatoes.

Other areas of sensor technology on the horizon include:

Fera is also developing a drone mapping system that collects aerial imagery in the visible and near infrared spectrum to more accurately identify crop stress. Collecting both types of imagery simultaneously helps spot unhealthy crops before problems are visible to the naked eye.

UAVs could potentially be used to carry other scientific equipment, such as spore and pathogen traps, in the future, Fera adds.

While some farmers may choose to run their own drone and camera, the complexity and cost of advanced sensor technology and the analysis required to interpret the data means most mapping is likely to be done by specialist operators or agronomists. 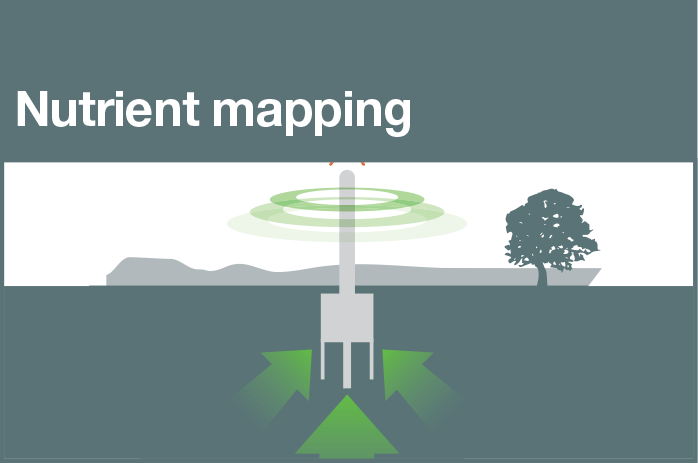 The John Innes Centre (JIC) is developing a system to measure soil nitrogen supply at three different depths to detect falls in soil nitrogen before deficiency is seen in the plant. This is unlike existing sensors that rely on measuring light reflectance, chlorophyll content or nitrogen levels in leaf sap.

JIC senior scientist Tony Miller says it could be commercially available within two to three years and believes similar sensors are possible for phosphate and potash.

Improvements to camera technology on mobile devices could also pave the way for tools to measure crop growth or detect physiological issues such as nutrient deficiency or water stress from a smartphone picture. 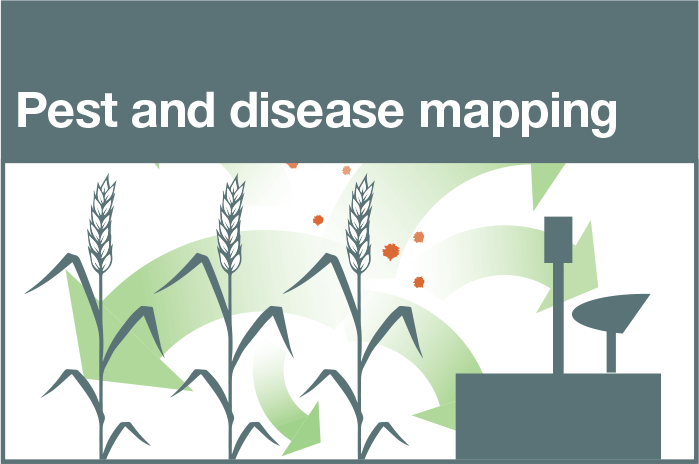 This has been the focus of many agronomy tools and will continue to be in the next decade as technological improvements allow data to be remotely collected from a variety of sources and analysed with sophisticated computer modelling.

Real-time monitoring of pests, disease spores, soil and plant nutrient status and local weather data allows web or app-based decision support tools to be better tailored to field conditions and will give growers more confidence in their accuracy and reliability, says Bayer’s Will Charlton.

Advanced warning of potential problems before symptoms are detected in the field reduces the reliance on“fire-fighting”and improves the efficacy of control measures, he says.

A prototype“smart spore trap”being developed by Fera, OptiGene Ltd, The University of Hertfordshire and Bayer, is one such example. The system, being trialled on CropMonitor plots this spring, detects disease spores in the field and combines this information with local weather data in a computer model to produce a disease risk assessment for that site.

It could give up to 28 days’notice of a potential yellow rust infection, and around five days’notice of brown rust due to its shorter latent period, says Fera’s Judith Turner. The system is also being developed to detect Septoria.

Technological advances within wheat breeding will herald some big changes over the next decade and should help break the yield plateau many European countries have hit over the past 10 years, says Steve Patterson, Bayer’s global crop manager for cereals.

He is confident the first full physical map of the wheat genome will be completed within three years, allowing specific traits to be more quickly identified and incorporated into commercial varieties.

Other technological developments have already helped overcome historical cost constraints of breeding hybrid wheats, which represent a major opportunity for UK growers within a decade, Mr Patterson says. Bayer has invested in a hybrid wheat breeding programme and he believes global yields could be lifted 10-15% over existing open pollinated types.

“Hybrids perform best under stress conditions so the yield benefit may not be as great in the UK due to its favourable climate for growing wheat, but I still expect an increase.”

But it is the yield stability of hybrids in stress situations that could be the biggest draw to growers, especially those in areas prone to drought stress during the key GS 30-31 and grain fill stages, he says.

“Hybrids have the ability to grow away faster in the autumn, so there may be opportunities for later drilling too.”

Hybrid wheat will require a new agronomy blueprint so future varieties are likely to be accompanied by a more sophisticated package of digital agronomy tools and datasets to help growers and agronomists get the most out of them, he says.

A further priority is the need to find new ways of overcoming grassweed resistance, Mr Patterson notes.“At the moment there’s no silver bullet coming in the next 10 years, but we will continue to invest in finding something, whether that’s new chemistry or non-GM herbicide tolerance.” 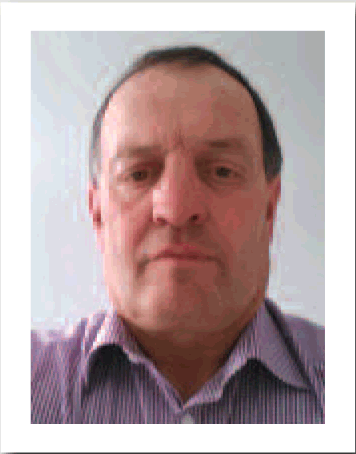 Like many growers, Essex tenant farmer and contractor Philip Coleman, recognises the wealth of new technology being developed within agriculture, but insists any investment must deliver a tangible benefit to the business.

It can be difficult to justify the cost of new kit, but as so much now comes with precision farming capabilities as standard, it’s driving us further down that route

“There’s a lot of good technology out there, but with so much pressure on commodity prices, crop margins, time and resources, any system has to deliver a clear benefit otherwise you’ve got to question why you’re using it.”

Mr Coleman, who farms 485ha in-house, plus harvest and cultivation contracting on a similar amount of land nearby, uses John Deere’s auto-guidance on the main tractors and has just started yield mapping on the combine.

“We’re not particularly tech-savvy and don’t often jump in straight away with new technology. It can be difficult to justify the cost of new kit, but as so much now comes with precision farming capabilities as standard, it’s driving us further down that route.”

He believes the greatest technological benefits are likely to come from the integration of yield and other forms of mapping with variable rate application technology for seed rates, fertiliser and crop protection products.

Hybrid varieties are also of interest, he says, not least for their potential to deliver more consistent yields in dry seasons.